He’s back! And here’s a little review of a little seafood place called El Vigia! Click on the restaurant name to take you there.

This is the first time incorporating the Casual Restaurant Critic in the notthenews Blog, so please feel free to comment and/or report any problems with the linking back and forth.

Since this blog is all about bitching and moaning, I thought I would share with aspiring business owners the experience to be had with the idiots that ‘work’ in the federal government agency charged with the registering of trademarks and logos.

Called the IMPI (sounds like impy: small, monkey-like – which seems to govern the manner in which they proceed), the Instituto Mexicano de la Propiedad Intelectual is the branch of government that will review your logo, trademark and so on and register it so that no one may copy it. Or that is what they are SUPPOSED to do anyway.

The real life case of one local tshirt printer demonstrates that their efficiency is dubious at best; downright retarded at worst. In an effort to prevent the piracy so common among tshirt printers, the owners of Mayan Xic tried to register some of their more popular phrases and slogans, not to prevent others from saying them or to get some sort of dominion over phrases used in daily speech, but to prevent other tshirt printers from taking the original idea and printing them up for profit themselves.

When you apply for copyright protection, you must first apply ($$) for a ‘name search’ which will reveal if anyone else has registered the phrase or slogan before you. In the case of Mayan Xic, the phrase UAY (Mayan expression of surprise or fear) was searched for. Since no precedent was found, a formal application was filed (more $$). 6 months later, a letter left the Mexico City office and was delivered in Merida another 3 months after that, informing Mayan Xic that UAY was not available because there was a precedent. What was the precedent? It turns out that the brain surgeons at the IMPI, in true office-cloistered, blinded to reality, burocrat fashion, found that someone (Hershey’s no less) had registered Milky Way (really)!!! So much for that. You want to argue the point? Well, you can register a revision of their determination ($$) and wait another 9 months for their probably negative reply.

One of the phrases was actually registered, and it was found that a local printer was printing up shirts with the same phrase. The lawyers were approached and lo and behold, it WAS possible for the IMPI to act. The only caveat? The local office – here in Merida – had no one specialized enough to actually perform the required verification visit to the establishment in question. It turns out that this f^&%$d up system requires you, the person whose registered design is being pirated, to PAY FOR THE IMPI IDIOT TO COME FROM MEXICO CITY!!! Yes, you – already paying taxes that should be covering this – must pay for his airfare, his hotel, and his expenses while he is here doing his job! Is this outrageous or what or is it just me?

Remember the IMPI has an office in Merida – which your tax money is paying for – with over 7 employees in plain sight, none of whom apparently possess that obviously rare additional job skill required to go to a business and verify your complaint. And woe is you if the address you have given him is incorrect; in Merida many houses and businesses are the same number, only the letter changes. For example if your pirate is listed at Calle 50 #500C and the ‘inspector’ finds that the business is actually at #500B you are out of luck. He does not have the authority to go next door, even if the pirated goods are hanging there in plain sight.

As usual, this information is posted with the hopes that potential business owners in Mexico will read it and realize what kind of stupidity and burocratic entangelments await them in this still – in spite of what President Fox might declare on visits abroad – very much third world country. 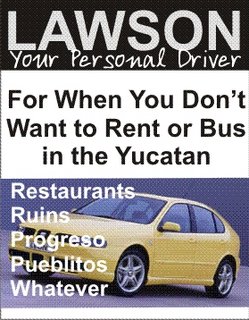 It’s time I took my love of driving and exploring the Yucatan to the next level.

Personally, I like to rent a car when I travel. There’s nothing worse – to me – than being herded around like some sort of passive cow, having to adhere to someone else’s times and interests. Sometimes I like to just stop and have a coffee, buy some roadside peanuts, climb a hill that turns out to be a Mayan ruin or whatever.

But some folks don’t have the time or the inclination to rent a car themselves and don’t want to use public transportation. And they enjoy getting some clear answers to their questions on life in the Yucatan; objective opinions on what’s worth seeing and what’s a total tourist trap.

So. In between NotTheNews updates and Casual Restaurant Critic outings as well as regular work, I am going to offer this service – for a limited time to gauge the interest and demand – to those who want the convenience of a comfortable car with a knowledgeable driver AND the complete flexibility to do whatever they want, when they want.

One of the things I want to specialize in is taking you to those wierd and wonderful, great and out of the way, known and unknown eateries that can be found in Merida that you might not get to if you were renting or bussing. Like La Susana Internacional in downtown Kanasin, home of possibly the World’s Finest Panucho. Hey I like to eat. What can I say.

Email me and we can discuss your travel plans for the Yucatan peninsula, if you will be based in – or visiting – the formerly white city of Merida.

Cheers and thanks for putting up with this totally commercial post!

Is there hope for a moderate, internationally friendly, less beligerant, more tolerant elephant to our immediate north?

The U.S. elections results seem to indicate that all the bullshit coming out of the hard-ass Republicans is finally, thankfully, wearing thin on the up-to-now paralyzed by fear citizens of the United States.

I know next to nothing about U.S. politics and so will abstain from voicing an opinion on whether or not having Nancy Pelosi as speaker of the house of Representatives is a good or bad thing; but it is interesting that there is now a democrat in that position and a woman to boot, which is is a historical first. And since this position is third in line for the presidency, should something awful befall the current pres and vice pres, heaven forbid, that makes it even more intriguing to this complete outsider.

At least now there will be some actual dialogue back and forth instead of one-sided monologues.

One of the funny things to me – an anglo atheist – about living in a latino catholic culture is the predominance of people named after the bible’s main character, Jesus, as well as the two supporting actors Maria and Joseph. It seems that absolutely everyone is called at least Jose or Maria with the addition of another, more regular name.

The other day my daughter exclaimed to me “Jesus (Hay-SOOS) helped me with my math”. Of course she was talking about one of her classmates who shares a name with our biblical protagonist, but when we translated it into English we both thought the phrase was extremely hilarious, especially coming from her, the daughter of the afore-mentioned anglo atheist.

Who knew that Jesus was into algebra?