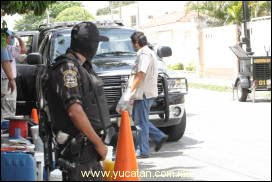 Back in Merida from my travels, I can perceive the nervous tension in the city. The violence associated with more ‘macho’ states like Nuevo Leon and Sonora has made an appearance here at last, and it has shaken up the Yucatecans like nothing before. No hurricane has had the impact of the news that 12 headless bodies were found here.

Here! Where nothing ever happens!

There is a saying that says, cuando se acaba el mundo, me voy a Yucatan which roughly means when the world comes to an end, I’m moving to the Yucatan. Well, that feeling of ‘nothing bad ever happens here’ has been shaken out of many Yucatecans. The ambiente is tense: 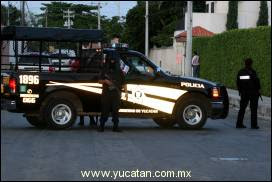 That all said, I have not felt particularly unsafe in my daily activities. Business-wise I am hurting but I don’t feel physically threatened, yet. I guess if I was a clubber or involved in some illicit activity I would be worried, but for us normal folks trying to eke out a living, besides the traffic complications, armored machine gun vehicles on the periferico and the occasional military helicopter with armed soldiers sticking out overhead, nada grave.

2 thoughts on “Hysteria in the Yucatan?”