In Las Vegas, hidden in an ugly shopping center on Sahara called (it’s an original name no doubt) Commercial Center, is Lotus of Siam.

Lotus of Siam, if you do some digging on the internet, has a lot of fans! The accolades and magazine and major newspaper write-ups can be read in their entirety while you are waiting for a table, since they are posted in their tiny waiting room, where you will wait for a table as your nose starts to send urgent messages to your stomach as a result of the aromas emanating from the kitchen. “Best Thai Restaurant in North America” says one such article. Oh yeah, you say which magazine said that? Gourmet magazine that’s who.

The Critic does not know if it is the best in North America or Las Vegas (or even Sahara Blvd for that matter) but it is extremely good and highly recommended. A meal here will be better, more satisfying and much more delicious than someplace on the strip or in one of the hotels.

The Critic usually orders more or less the same things: the Pad Thai, which, if you are familiar with, is a complex mixture of flavors and textures when done right and a mass of peanut-y goo when screwed up. Here it’s the former. Also there is the soup, whose name once again escapes me, but it has lemon grass, coconut milk, shitaake mushrooms, ginger and is served in a pot to share with whomever is lucky enough to be sitting across from you.

Crispy duck is a must – there are three kinds, one is a little simple with Thai basil; another features a curry sauce and a third features…. something else. They are all delicious, having tried them on previous occasions, but the favorite has got to be the sauce-less one. It is such a flavor explosion in your mouth, if you include a basil leaf or two in your bite of duck, that you will think you have died and gone to heaven.

On this occasion the Critic asked for a recommendation and the waitress suggested crab salad. This was some kind of crab meat, lightly dusted and then quickly deep fried and served on a mixture of fresh salad greens that had a sweetish dressing on them. The taste of this dish was very light, fresh and delicate; have this one before the duck, definitely.

No room for dessert as usual, and the bill, with a beer or two, usually comes to under 60 dollars for two people. For that kind of money on the strip, you might get a main course for one.

Go there if you love Thai. 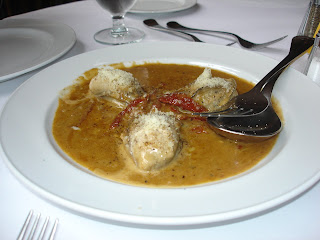 The Water Street Café is another Vancouver restaurant that has been around for a long time, and while not part of a chain as far the Critic can tell, it has survived and maintained a stellar reputation as a great place for lunch or dinner.

It’s located on Water Street, an original name for a street that ran along the edge of the… water, in historic Gastown. After living in Mexico and particularly the Yucatan for the last 20 years, the Critic always smiles when coming across anything ‘historic’ in the Vancouver area. The whole damn country is only about 100 plus years old!

There is a small but delectable menu, a decent wine list, good service and the room itself is casually elegant. The fact that it is located right in front of Gastown’s main attraction, an old steam clock that blows strains of the national anthem (the Canadian one of course) every fifteen minutes and then a whole chorus on the hour, makes for good people watching while sipping on your wine. Watch the Japanese tourists jostling for position in front of the steaming, whistling clock to get their souvenir photograph. Great stuff.

Try the oysters (pictured above) pan fried and then served in this indescribably delicious sauce that will have you dragging the remains of your bread, trying to get all the gravy, because, like Ricardo Montalban used to say, it’s good to the last drop. 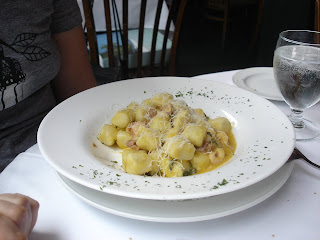 A tradition for the Critic and the MidiCritic (not to be confused with the MiniCritic) the other dish always ordered is the Penne with BC smoked salmon in a light creamy sauce. Again, absolutely fantastic.

The MidiCritic always orders the same dish, the details of which usually escape the Critic’s Alzheimer’s-deluded/diluted mind. However, thanks to editing capabilities and occasional flashes of short-term memory, one can come back and edit, right? There it is right in the photo for crying out loud. It’s homemade gnocchi stuffed with cheese and served in a pumpkin squash sauce and it is again, excellent.

The Water Street Café is a great place for lunch or dinner. Highly recommended.

While I travel in North America, it is with an increasing sense of incredulity that I realize the narcos have finally made their presence known in the Yucatan. Merida is finally waking up to the fact that it is not immune to their tentacles.
I once told my family that if the violence in the rest of the country ever made it to the Merida, I would pack my bags and leave. It seems that a decision is imminent…
More later…