The CRC, on a neverending quest for decent sushi in the formerly white Merida, had a go at Sensei Sushi, yet another Japanese restaurant to recently open its’ doors to Meridas’ undemanding sushi fans. If it’s got cream cheese in it, it must be good, seems to be the motto.

The cantankerous Critic, along with the Better Half, had a quick lunch there two days ago.

The room is much nicer than what the Critic had come to expect after putting up with the faltering Campay, tolerating Shaolin and surviving the ghastly Konsushi. Quality furnishings in an airy, bright, well put together design that evokes a sense of purpose; as opposed to the amateurish and the frankly chaotic of the other restaurants mentioned above.

The Better Half had ordered 3 rolls off the table card and so the Critic is not sure what their names were, but all three were better than expected. A salmon nigiri ordered for dessert (a Casual Restaurant Critic sushi tradition) was perfect; the salmon cut thick and ice cold, served on a perfect portion of rice with a light brush of wasabi.

Sensei made a good first impression, with of course the usual exception typical of all Merida restaurants:* the service sucked. Slow, inattentive and sloppy, it was embarassing.

It is decent enough as a sushi option in Merida if you aren’t particular about the service end of eating out.

*Two Merida restaurants come to mind if good service is important to you: La Recova and La Susana. The rest, and I’m sorry my dear Yucas, all suck to some degree. 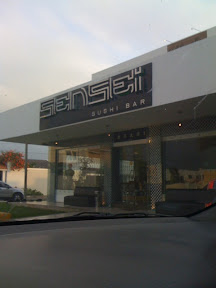