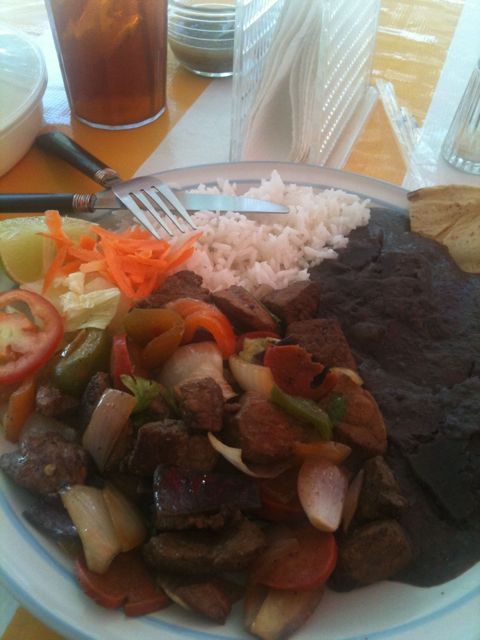 There are, as you know, other sites out there, such as YES (Yucatan Expat Services) that will take you through the FM3 or FM2 renewal process step by step, so this article won’t be about the actual process itself, but rather just a few comments by me on my experience this past week.

Yesterday, I spent the good part of the morning (all of it actually) sitting in the Migracion office here in sunny Merida. Migracion, for those of you new to the word, is the term used to generically describe the Immigration office here. It is located in a former private home or rather mansion; not an actual office built for the purpose, and so is a series of rooms in a house that some wealthy family has given up in rent to this branch of the federal government. In their rental clause, we can assume that a stipulation was made that nothing be changed architecturally since many furnishings are still there that have absolutely nothing to do in a federal immigration office. Like that giant chandelier in the room where you get your application looked at. Crammed in what I am guessing was a dining room at one point are many desks and shelves of the Office Depot particle board variety, along with a double row of black seating for the applicants as they wait their turn, each holding either a little green or orange square of laminated paper with a number on it.

This is a very official little paper and measures about 3/4 of an inch square, so don’t lose it. I recommend gripping it tightly between thumb and forefinger, although your thumb will probably render it invisible; that’s how big it is.

As you sit there, clutching that piece of paper, you can’t help but notice the huge art-deco-ish chandelier hanging above you, now retrofitted with ghastly energy saving blue-white light bulbs. The photo I took of it for yesterdays trivia game “Where in the Yucatan am I?” (played on Twitter – stay tuned for another game real soon) prompted one player to remark that he thought I was somewhere under a rocket being launched. This gives you an idea of what this chandelier looks like. I will post the photo of the lamp, along with the other two photo-clues, below.

Also, a second clue I posted on Twitter was of the floor. As in most houses built in the 1800’s this mansion has beautiful pasta tile floors that form a kind of carpet on the floor of each room; very pretty.

The walls, you will notice, have remnants of that brown packing tape that is used to stick notices and papers to the walls, and once those papers and notices have been removed, the tape leaves a sticky brown residue that is impossible to remove and pretty well ruins the once white walls. Notice also the doors, beautifully made back in the day and never designed for multiple per-minute openings and closings – they are suffering terribly and special hinges and latches have been installed to enable them to close properly.

The personnel in the office is, for the most part, aloof and there are many people walking about – some uniformed, some not – usually holding a bunch of papers. Their instructions apparently are not to make eye contact with the victims or applicants until the applicants turn comes up. The friendlier ones are the ladies that have been in Migracion since the Ice Age and who have labored under the many delegados that have come and gone during their tenure. The delegados, you see, are the ones who head up the branch of this and any office run by the federal government (Immigration, IMSS, INFONAVIT, Tourism etc) and they are appointed by friends in high places and do not necessarily have a clue about the job involved in their new prestigious position. And so, the actual work is done by the sub-delegado and the previously-mentioned ladies who are all very nice, know everyone and how to get things done.

I spent the morning there, as I mentioned earlier and had plenty of time to observe the office and all of us applicants there. Some read books, others chatted amongst themselves, bored children jumped and screamed delightedly on the stairs. There was plenty to see and time passed quickly, from 10 AM to noon. Once at the desk, I found that my FM2 renewal was pretty well on its way and that I was to hand in a copy of my last tax payment, which I did, and then received a payment form to pay for the renewal at a bank. If you are unfamiliar with this process, most government offices distrust their employees or have no control systems in place to handle money and so one must always pay the fee, cuota, fine, whatever – at a bank.

Once I paid, I rushed back to be in the office before the gates close at 1:00 PM and was helped about an hour later. My bank receipt was collected and I was given a cita – an appointment – to come back next week to receive the actual renewal, which, it was explained to me, would be in the form of a credit card size visa, much like the ones issued by the US of A and the little gray booklet would become obsolete.

Once next week comes along, I will write about the exciting denouement to this adventure! 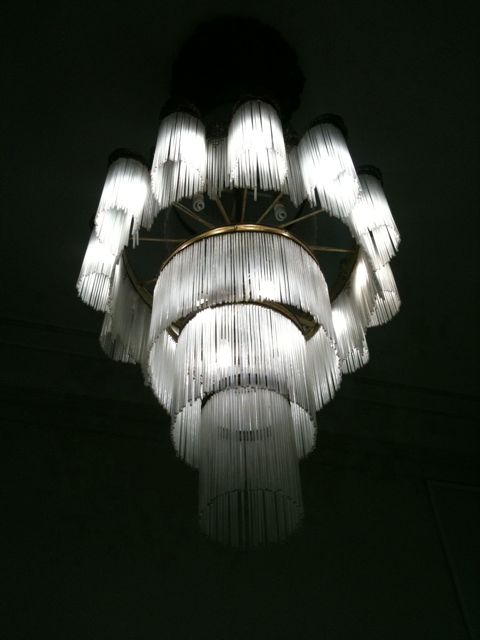 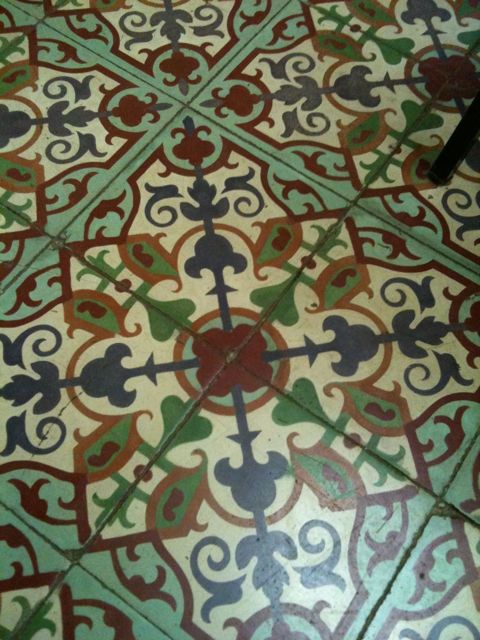 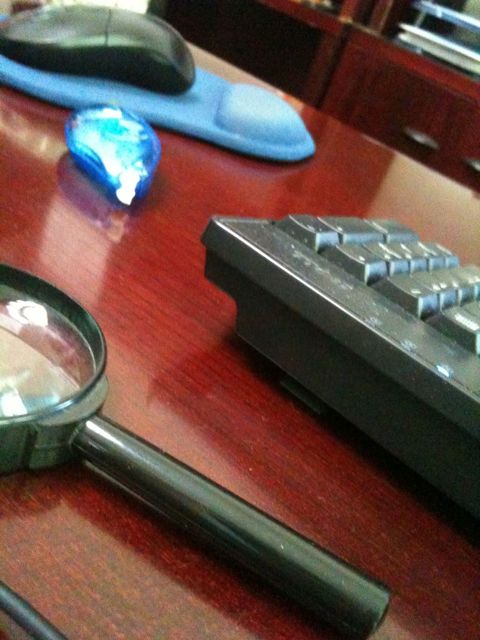 If there is any hesitation as to why one should use a professional translator when writing menus in another language, let the Casual Restaurant Critic lay those doubts to rest with the following presentation, courtesy a local hotel/restaurant that really should know better. The Critic suspects that the menu writer was Chinese.

Here are some comments on the menu, followed by photos of the actual menu to prove that this is not made up gibberish. It is published gibberish.

Enjoy! And thanks to my good friend, the Argentinian Evita L. Ekcesso for this item. 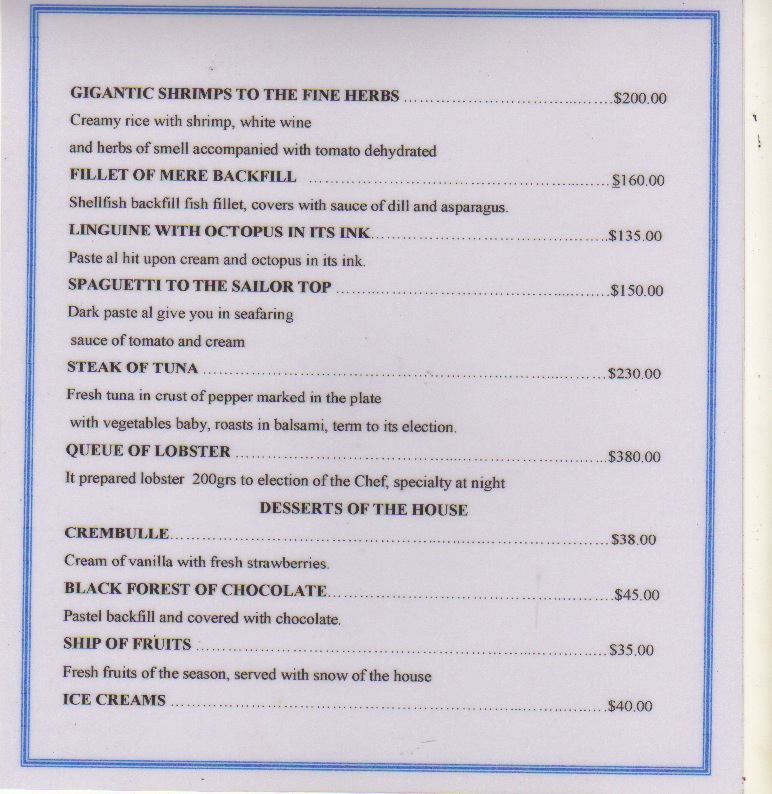 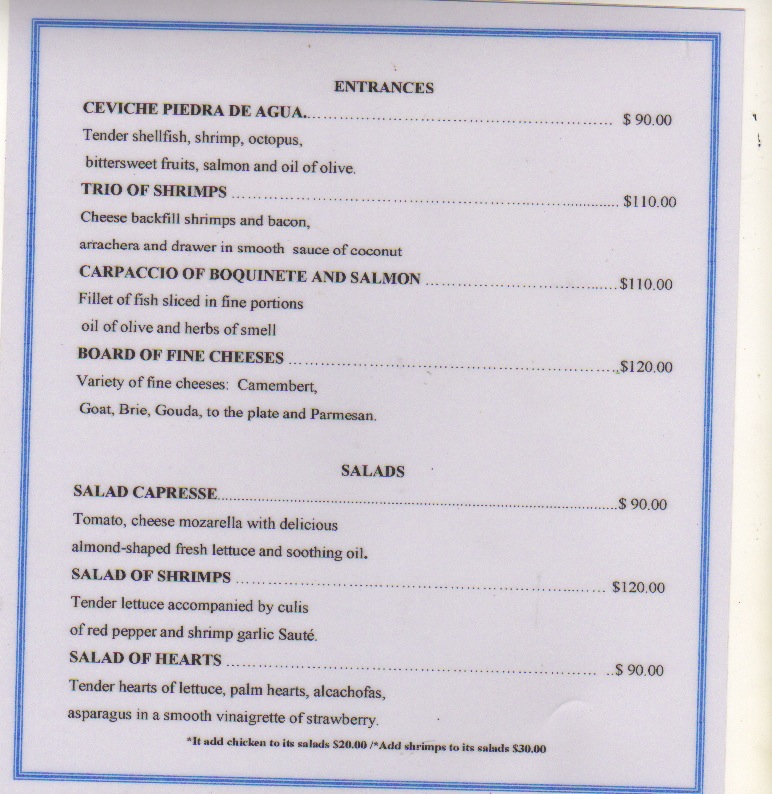 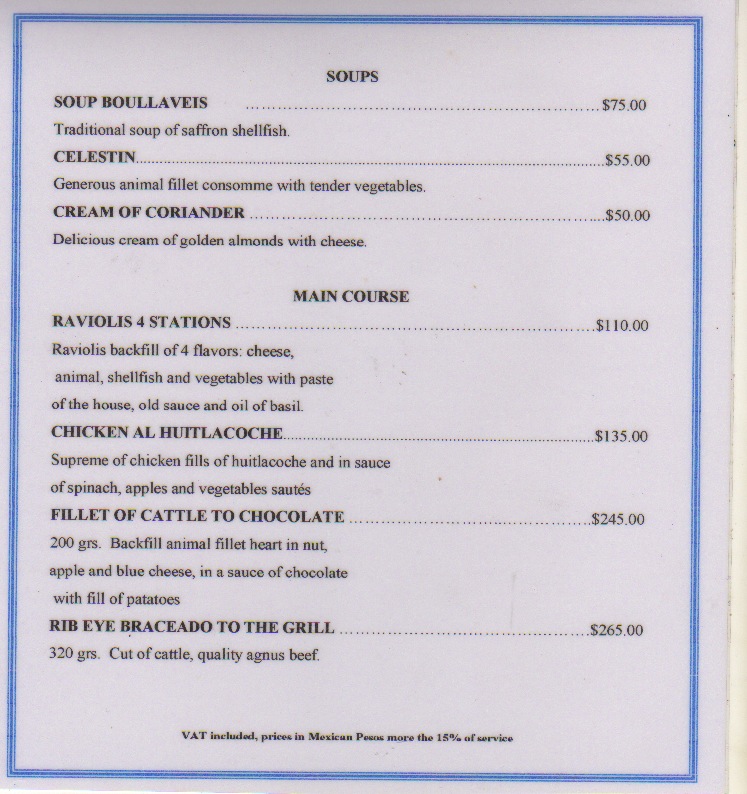 An email from a friend alerted me to the presence of a BBC reporter who did a piece on Merida which focused entirely on the ‘storm in a teacup’ surrounding the statues of the Franciscos de Montejo which were recently unveiled on the Paseo de Montejo, Merida’s wide, Champs Elysees -style boulevard. The interview with a Yucatecan anthropologist, which can be heard here, covers the unfavorable reaction that the statues have received from some sectors. It seems to me that if the BBC was doing their GeoQuiz on Merida, there are about a gazillion other things to talk about, but the statues were the topic of this segment.

In my humble and unschooled opinion, the statues simply put a face to the name that is present on the avenue, a local beer, and of course the Casa Montejo, now a Banamex bank and once their base and home in the city’s Plaza Grande. Undoubtedly, their contribution to the city, besides drawing up the initial plans for how the newly formed capital should be laid out and grow, included a lot of exploitation of and violence against, the existing Mayan indian population. I don’t feel that the statues glorify the Montejo clan, as the history of the Yucatan is taught, to some degree, in every elementary, secondary and high school in the state and so most people are aware of the atrocities perpetrated by the conquistadores.

On the other hand, there is a statue, much larger and more dramatic to be sure, to one of the great Mayan indian warriors, Jacinto Canek, on an avenue that bears his name as well. The difference in the two statues and where they are located may be a subtle clue to the underlying sentiments that prevail in the Yucatan today. The Montejos are on Merida’s most spectacular avenue, where turn of the century mansions line the street and pedestrians stroll under giant shady trees on wide sidewalks; the Jacinto Canek avenue is a noisy, commercial and thoroughly unattractive street, notorious for being the home of the shabbiest strip clubs and where the sidewalk is broken and populated each night by transvestite prostitutes.

Racism is alive and well in the Yucatan – but never talked about – and perhaps the Montejos statues contribution will be a renewed discussion on the lingering effects of that fateful moment in history, over 500 hundred years ago, when the cultures of the old world clashed with those of the new.