Last night the Casual Restaurant Critic and his ever-accomodating BetterHalf had a most amazingly delicious meal at El Rincon Oaxaqueño, which means a little corner of Oaxaca. If you are not familiar with Oaxaca, a state with great handcrafts, fantastic scenery and some Mexicos’ best cuisine, you need to get out more.

The speciality of Oaxaca, like Puebla, is its mole. Pronounced MOHL-ay, this is a rich, complicated and ingredient-packed sauce made from everything and anything, from toasted chiles and spices to rich dark Mexican chocolate. It is usually served cooked with chicken or pork and accompanied by white rice.

The Critic and his BetterHalf were the only people in the restaurant near about 5 PM when they normally close on Sundays, but the people were gracious enough to not only serve some great food, but provide plenty of information about the restaurant and Oaxacan food in general. The initial impression did not, as the word implies, impress, as a rather unkempt young man was at the door and essentially indicated that any table was fine and left some menus, but then a real waiter (from Mexico City as it turned out) came along and all was well. Great service from this young man who was friendly, gracious and seemed quite proud of the menu and the kitchen.

A platter for two was ordered, which featured grilled cecina (pork), beef, chorizo, melted quesillo (Oaxacan string cheese) and of course chapulines aka grasshoppers. Yes, grasshoppers, along with ant eggs (not sampled on this occasion) are considered delicacies and are the cutest little crunchy things that you toss into your mouth like popcorn or stuff into one of their fantastic hand made corn tortillas which in turn are much larger than the Yucatecan version and even taste a little different. The platter comes with 3 tlacoyas (?) which are like Mexico City style sopes, with beans and more quesillo on top.

Also sampled was their black mole, which in this case came with chicken and was exquisite. Before all that, two samples of mole arrived at the table; the almendrado which to the Critic seemed a little on the bland side, and the colorado (reddish brown in color) which was the Critics favorite: spicy, thick and full of all kinds of delicious flavors. These little samples are accompanied by corn tostaditas for dipping into the tiny pots.

All in all, a great dinner in a restaurant reminiscent of someones home (which evidently this is, given that there were some family members watching TV in a room, off the restaurants dining areas. 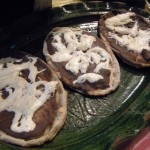 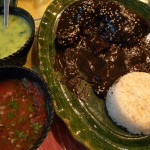 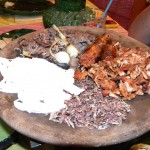 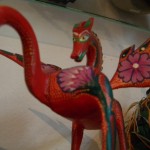 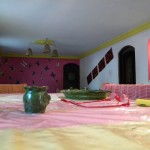 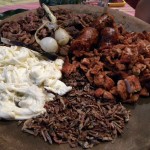 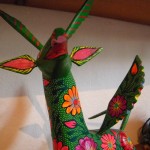 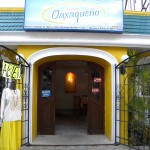 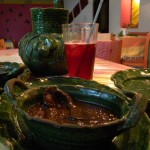 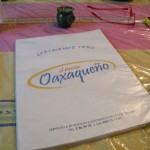