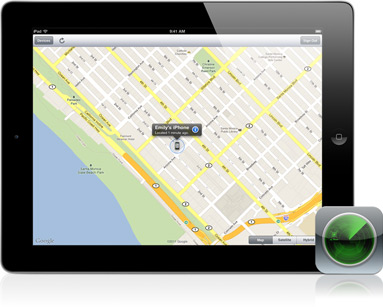 Carting a huge load of merchandise with both hands, I struggled, iPad securely under my arm, to maneuver the key and open the trunk, having lost the use of the remote due to unexplained reasons resulting in shrugs from the técnico and the obvious and brilliant deduction that escaped his lips as he looked me in the eye: “no sirve“. The two giant bags of clothing deposited in the trunk, I climbed in the drivers seat of my trusty Impala and drove to my office.

It was only then that I realized in that adrenaline-shot-to-your-brain way that goes beyond the usual irritation I feel when I can’t find something, that I did not have with me my trusty iPad. A quick look through the car and trunk. Nothing. Maybe I left it at the store where I bought the clothing? Nothing. They even sent someone out into the parking lot to check but found nothing. A sinking feeling overcame me. I had set the iPad on the roof of my car and driven off. Obviously, it had fallen onto the street. Obviously, someone had picked it up. Obviously, it was gone for good. Right?

So I lost an iPad you are thinking. Poor me right? But it’s not prostate cancer, you think. Whatever. On that iPad I have all my bank account, credit card, supplier and other business info in the form of a nifty app called PocketMoney. I use GarageBand to create what I think are cool little riffs and the occasionally brilliant recording. Then there is all the email info, Facebook, Twitter, FourSquare, WhatsApp – all accounts semi-permanently open to avoid me having to log into everything every time. PayPal, Skype. That’s all going to need to be changed.

iTunes! The master account that controls everything. Have to change that real quick.

After making all the password and login changes I turned to the Find My iPhone App and found myself on the icloud.com web page. There, after signing in with my newly modified iTunes account info, is the button and I push it. The screen changes and a map of Merida shows up and promptly shows my iPhone’s location, next to me. Yes I have an iPhone. The iPad, however, is not found. “Offline” says the app.

Turns out I never got a SIM card for the iPad, thinking that Carlos Slim would not miss one more account paying for his museums and extravagant lifestyle; instead, I use the iPad exclusively with WiFi. Apparently, if my iPad was in the hands of someone, that someone had not exposed it to Wifi just yet. I waited.

The FindMyiPhone app has the option to

a) send a message to your lost iPad or iPhone

c) wipe your iPad or iPhone completely clean of all installed programs, all photos, everything.

I chose options (a) and (b). A message was sent (two actually) to whomever had it that could they please call me at such and such a number. Por favor. Y gracias. The number code would hopefully prevent snooping while the text message would help the potentially honest holder of my iPad find me.

Option (c) was a last resort. I wasn’t ready to wipe it just yet.

A week went by and little by little I was forcefully weaned off my iPad dependence. My biggest regret was having all my business info on it and my music. Everything else was replaceable. No sign from icloud.com. Apparently my iPad had either been hacked or smashed to smithereens when it fell off my car. I installed a new money tracking app on my iPhone called CashFlow that features a pig, presumably alluding to the piggy bank concept, in bright pink.

Then, about a week later, the following message showed up in my inbox: “Se ha encontrado tu iPad” I had to read it again just to be sure. Yes, there it was, it had been found, charged and connected to the internet via WiFi! Another email arrived on the heels of the first one, telling me that the message I had sent had been seen. Yet another email informed me that the iPad had been successfully blocked with my new numeric password. Excitement flowed through my veins and I waited for the phone call that was surely coming.

The phone did not ring.

After some time, I went back to iCloud and clicked on the found iPad icon, which was miraculously still online. A map of Merida appeared and I was able to determine that my iPad was in someones house, very close to Plaza Fiesta. Zooming in, I saw that the house was two houses in, across from a bunch of trees. Hoping that the satellite image was recent, and with no street view to go on, I drove as calmly as I could to the area, keeping an eye on the icloud.com map which was now displayed on my iPhone. No movement; the iPad was there, perhaps being hacked at this very moment!

When I arrived at what I surmised was the right place, I found two possibilities. A house, and next to it, a dental office.  I opted for the house.

All windows were open and looking in while tapping on the glass with a key, I saw my iPad right there on the kitchen or living room table, in the middle of the room not 3 meters from where I was standing. I mulled over the idea of slipping in and stealing back my iPad when a German Shepherd bounded into the room and jumped up against the glass, barking and trying to slip his head sideways through the windows to presumably take a chunk of me. Someone had seen me coming and had let him loose as a warning perhaps? A girl, about 17 or so, came into the room behind the dog who was now being quite noisy and ferocious. Being the great believer in the basic goodness of humankind I asked her if she could return to me the iPad which was sitting on her table as I was the owner and had seen over the internet that it was here. She said no, it belongs to a friend of my Dads and he wants to sell it to us. “You’ll have to talk to my Dad”

My response was straight out of an NBC sitcom. “Seriously?”

She nodded her head “And he’ll be back in about two hours” she added.

“I’ll wait” I replied and went to my car to settle in for a two hour wait.

Meanwhile, my secret weapon, aka the Better Half, whose faith in the honest intentions of possessors of strangers iPads was considerably less than mine, had flagged down an SPV patrol car to ask the nice policeman what one does in these situations. “You see” she explained to the policeman who obviously had time on his hands and was prepared to help out, “my husband is an extranjero and, well you know…”

The policeman did indeed know and showed up a minute later in front of the house. Notified by Better Half that the forces of the law were coming, I was there, waiting.

Meanwhile a boy had left the house and now returned with a man and a moment later, a second man showed up as well. Man A was the father mentioned above and Man B it turns out was a motorcycle messenger. They had come to negotiate with me but found themselves facing a patrol car, lights a-flashing and a stern looking cop alongside the silly gringo. Neighbors appeared from surrounding houses and talleres to watch this little drama playing out on their street.

“Y quien me va a dar mi recompensa?” he asked loudly. “Yo lo encontre!” He pointed at his own chest for added emphasis.

If there had been any doubt, his asking for a reward and saying he found it convinced the policeman that this was indeed the right house. I told the messenger to shut up and that I would make sure to give him his reward, but wanted to have my iPad in my hot little hands first. Man A, the father, came out of the house with the iPad and handed it to me saying only that he was charging it and had been looking for its owner. I could tell he was exhausted from all that looking.

Anticlimactically, the policeman took down everyone’s names, I tried out the iPad which was thankfully intact and undamaged and paid a small sum to the messenger to get him off my back and a larger sum to the policeman who said that this was the third iPad he had recovered thanks to the GPS function this month. It turns out that there was an open WiFi signal in the neighborhood and once the iPad had been connected to electricity, it had automatically connected to the internet, making the happy ending to this story possible.

Better Half and I went for a celebratory lunch, iPad securely under my arm.

You can make sure your iPhone is locatable at http://icloud.com

If you have only WiFi on your Apple device, make sure that it’s settings allow it to connect to any available WiFi signal.

Make sure you have your Apple device registered through iTunes.

13 thoughts on “The Story of an iPad, Lost and Found”