For those of you who enjoy a good yarn, and think like me that there is much in the history of the Yucatan that deserves a Coppola or better yet, Christopher Nolan treatment on the big screen, I would like to suggest a look at Gonzalo Guerrero.

Here’s a guy who is all old-school Spanish in the 1500’s and comes over to the so-called new world and, on a boat trip along the coast in a big old sailing ship and boom – the boat hits a reef and capsizes – leaving Guerrero and about 12 or 13 of his pals in a life boat, or perhaps clinging to a piece of timber, on which they reach the shore. Maybe they land photogenically on a sandy beach, or perhaps have to claw their way through twisted, mosquito and croc infested mangroves to land. I’ll leave that scene up to Christopher. Perhaps Emmanuel Lubezki can make it appropriately stunning, as this is the lead-up to the first interaction between the Mayans and the Europeans.

The Mayans meet them and, having somewhat of an appetite, promptly eat most of the survivors, keeping two of them alive for later. Dessert, perhaps? In any case, imagine the culture shock of these catholic Spaniards, meeting brown skinned natives painted in fearsome colors and speaking what surely to them must have seemed utter gibberish. A ‘Who Moved My Cheese’ moment, to be sure.

To summarize the rest of the tale, Gonzalo Guerrero goes native, adopting local hair styles and perforations and leading his new friends in battle against his former countrymen when they inevitably return with more ships in their thirst for golden treasures. His pal Aguilar, who is famous only thanks to his being a counterpart to Guerrero and who kept his Catholic faith and beliefs throughout and runs back to the arms of the Spanish crown at the first opportunity, is soon forgotten by the scribes of history. Gonzalo Guerrero, on the other hand is immortalized forever and is dubbed the ‘padre del mestizaje‘ or the father of all modern Mexicans, who have the blood of native Mexicans and Europeans coursing through their cholesterol-addled veins.

Is this a great idea for a movie or WHAT? Enough with scouring the archives and garbage bins at Marvel Comics. THIS could be a real blockbuster, folks!

UPDATE – This restaurant has now been CLOSED for some time. Unfortunate, as the food and ambience were pretty decent and in a different sort of location, away from the city. 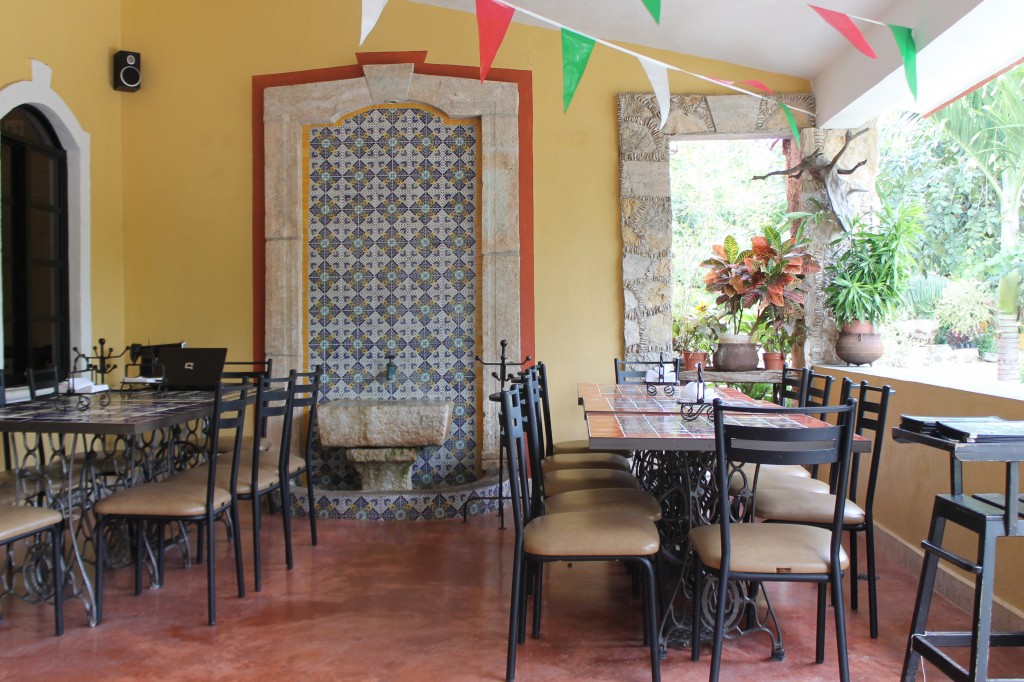 Many people have recommended the Critic visit Los Frailes, a pretty Yucatecan restaurant located in the village of Conkal, somewhat off the highway between Merida and Progreso.

With the always charming Better Half and on this occasion accompanied by members of the Vergara family (Sofia’s long lost Atlanta relatives) the Critic sampled the cuisine in the name of research and for the benefit of his 21 readers.

Upon arriving, an unsmiling, perhaps apprehensive, person of the male persuasion awaited to welcome the group with the question “Have you been here before?” said not as a welcoming comment but rather as a prelude to the next sentence which was “it’s that we don’t accept credit cards”.

OK, good to know and nice to see you as well.

The restaurant has an outdoor terrace and a small-ish interior which features air conditioned and enough hard surfaces to ensure a high level of noise which is always unpleasant and as the weather was conducive to outdoor dining, a table on the terrace was chosen.

Service was adequate and the ambiance pleasant. The food, which is traditional Yucatecan cuisine, is varied and offers all manner of classics as well as some the Critic hadn’t heard of before like the niños envueltos which are stuffed cabbage rolls that one can suppose look like children wrapped in green blankets, if those children were then covered with some sort of sauce.

The photos will show that each of the food items is very attractively and artfully presented but in the Critic’s never humble opinion the taste of these pretty morsels was somewhat lacking. Better-tasting Yucatecan food has been enjoyed at the Principe Tutul Xiu in Mani or Kinich in Izamal. Even the uneven Chaya Maya in downtown Merida has better-tasting food. Not to say it was awful – it wasn’t. It just wasn’t great. 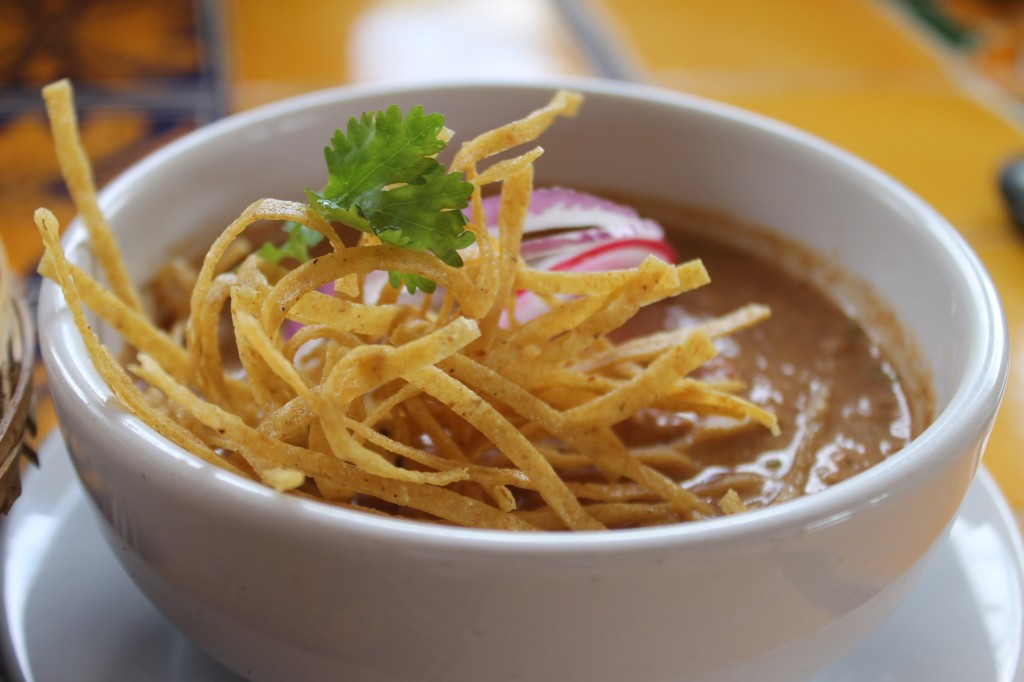 Sikil Pak was a little on the sour side, and runnier than the Critic would like. 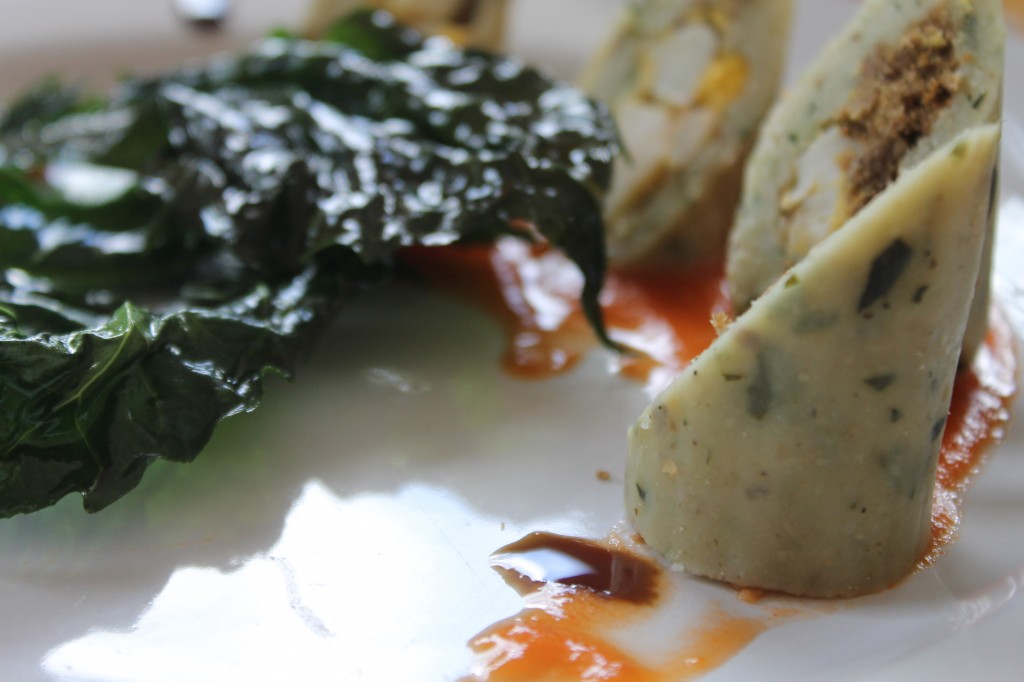 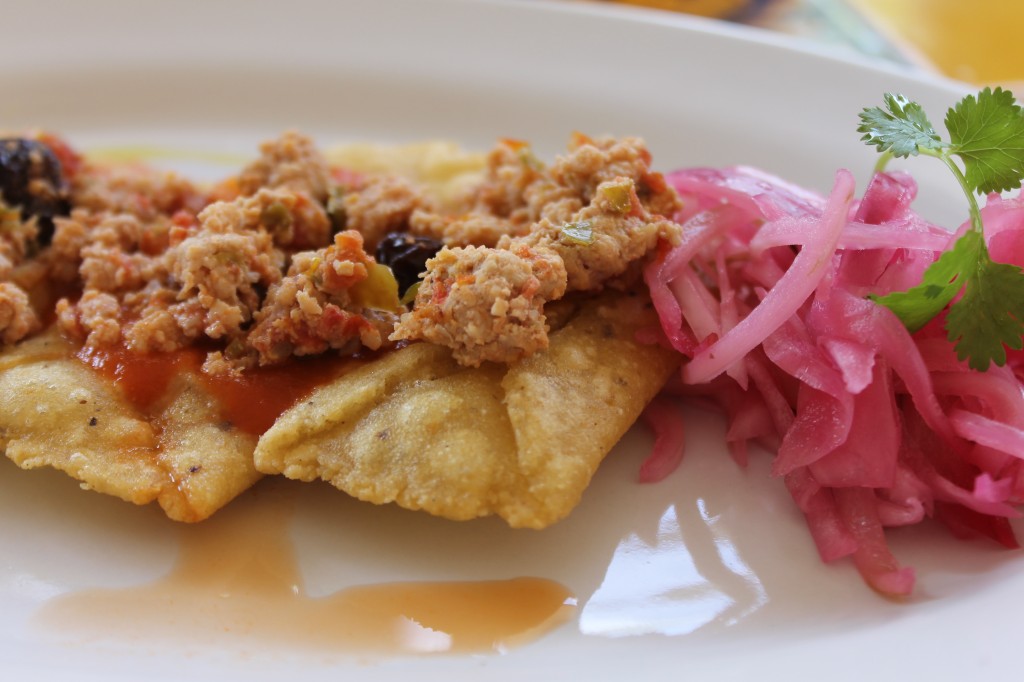 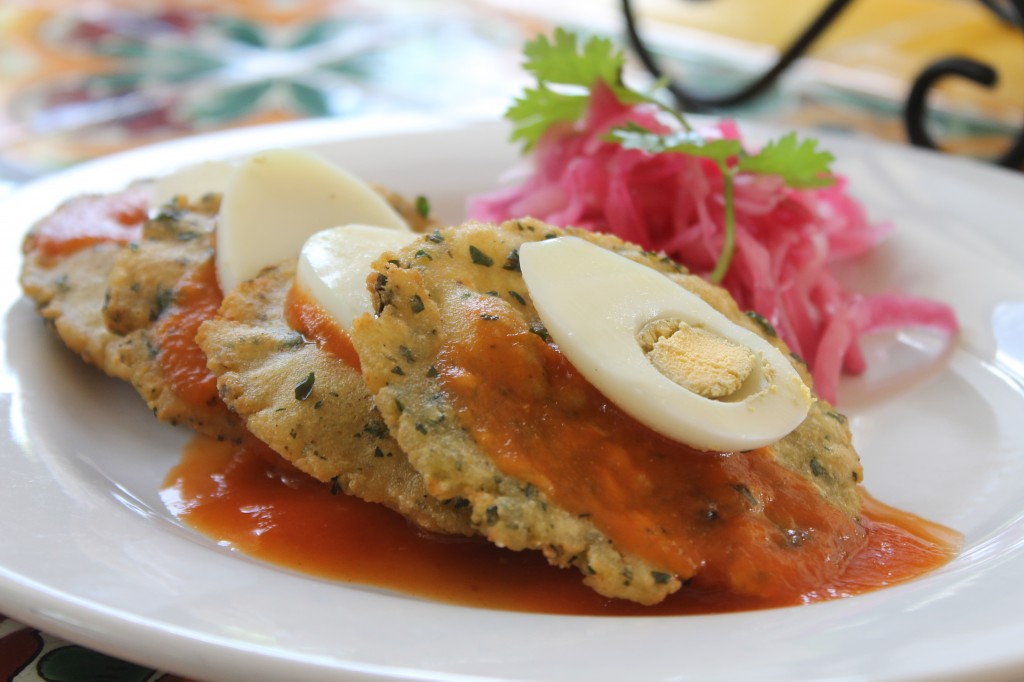 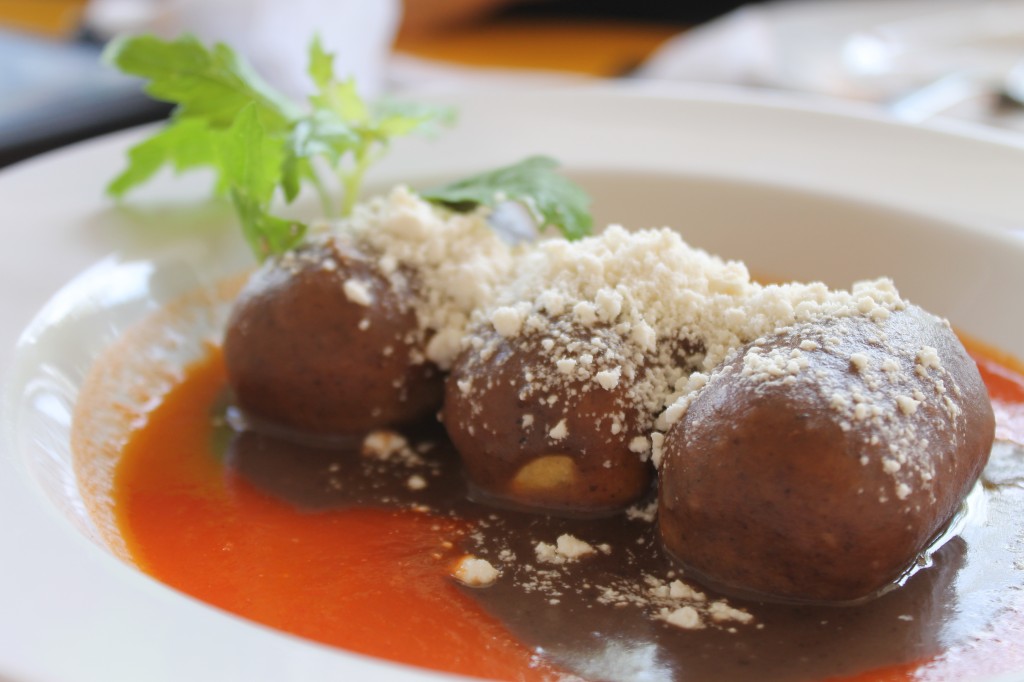 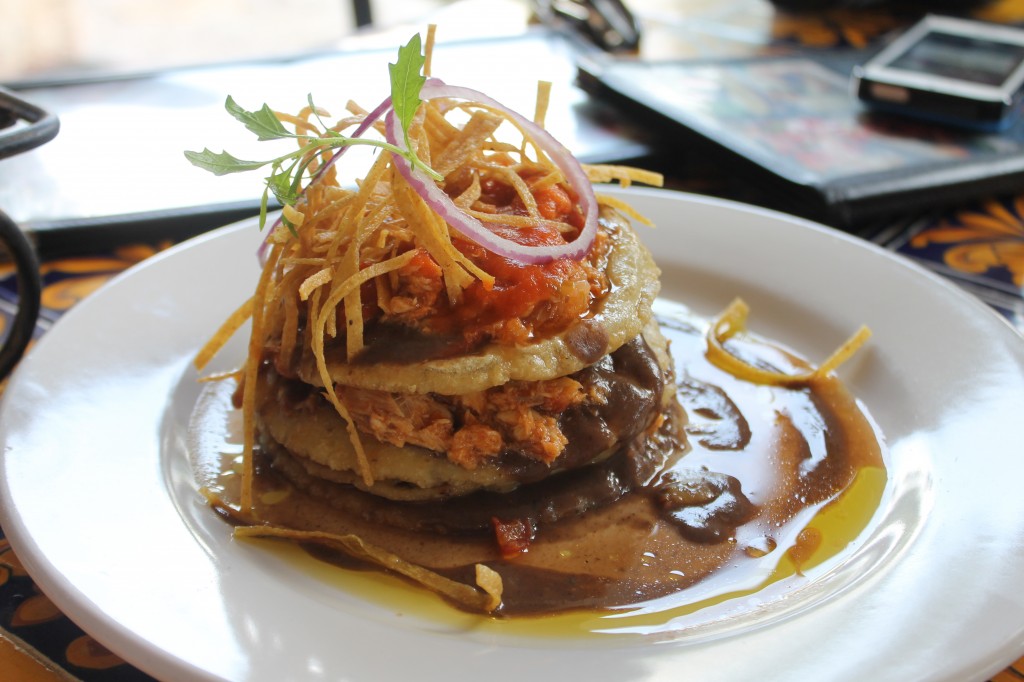 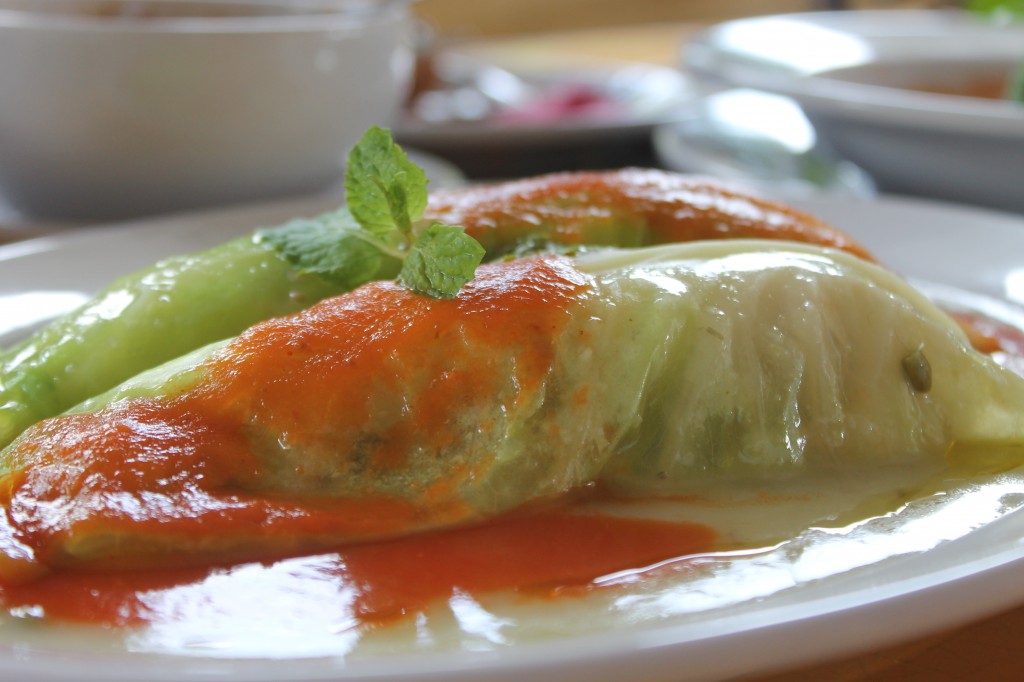 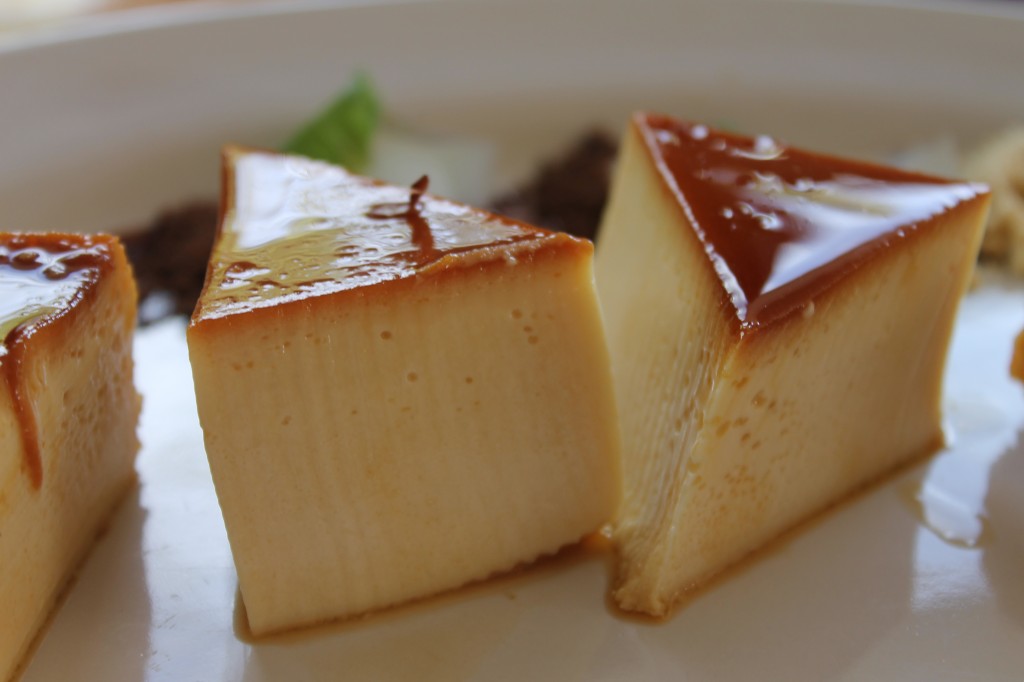 Queso napolitano or flan for dessert.