There is not enough time to go into great detail during this increasingly busy season (tourism-wise) and so the Critic will put up some of the most recent adventures in the Merida restaurant scene.

San Bravo was/is the Critic’s hangout during this World Cup, being held in the übercorrupt venue of Quatar. Or Catar as you will see it written in español on the posters here in sunny Merida.

The food is fine, the beer is cold and the screen is massive, in their smoking-allowed special room with massive air filters and extractor units. The Critic tried the burger which was fine, the fries were good too. The Caesar salad was a bit too creamy and massive as well, and the arrachera was tender and cooked just right. What the Critic enjoyed most was the carpaccio de salmon. All the portions are large so don’t go overboard.

The place rocks for dinner from Monday to Friday and on weekends there is a large crowd of yuonger folks who are there to drink and party. There is a DJ and the music is loud, so don’t go if you are wanting to converse with a large group of people around a table – you will need sign language to accomplish this goal.

It’s on the way home for those of us who live in one of the many gated communities in northern Merida or on the beach but Hermana Republica also has other locations, one of which is near the new Centro de Congresos along with another one downtown if the Critic has his facts straight.

This is a brew-pub place, featuring their now well-known Patito brand beer, brewed right there on the premises (the Progreso highway location that is) and the service can be spotty, but the beer is frosty and for the one game of the World Cup that the Critic enjoyed there, the food was fine. The photo is of a dish called Chicharron de Rib Eye, which is chunks of what one hopes is ribeye steak fried up and becoming increasingly popular anywhere in Merida where meat is served. This version came on a bed of guacamole and was quite tasty, if not cheap.

Kraken is one of the Critic’s perrennial favorites in Merida and it continues to be worthy of a mention. Located in a nondescript shopping center and with a locale that is entirely not at all as pretentious as so many “fancy” restaurants in Merida can be, Kraken is a true gem. Service is family style but keeps getting better; ie. don’t expect Balthazar service but what you get is commensurate with the place and the prices.

The menu is massive, and really anything you order will be amazing. The Critic likes to stick to the tostadas, loaded up with different fishy selections, and also either one of the hearty and massive chilapachole or seafood soups.

For those of you who like their beer, and are not afraid to try one of the many and varied local beers now being made right here in Merida, the Crici recommends visiting Hop, in the food court of the fancy Paseo 60 complex on 60 street.

There are a gazillion beers, some on tap and others in bottles. The Critic recommends (strongly) you try the Schwarzbier on tap (photo below) if they have it (selections change from week to week) and anything made by a Merida company called Thodes brewery.

Food is available as well and the ribs are truly delicious. 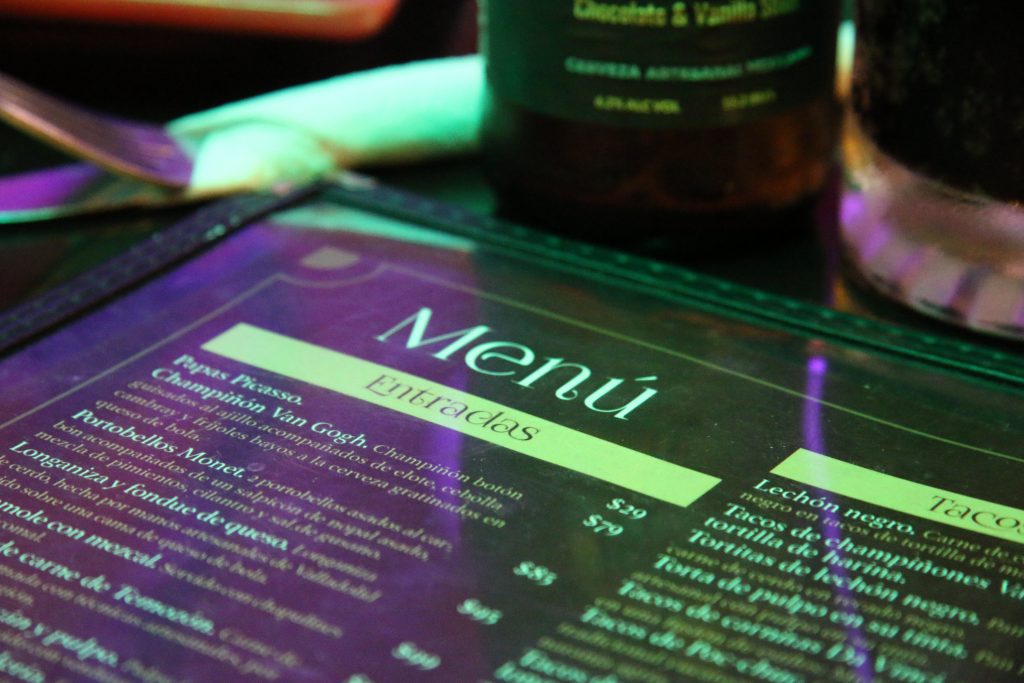 The Casual Restaurant Critic and his Better-than-Ever Half, had the opportunity (by invitation) to visit this cantina/restaurant and sample some of their amazing food very recently. With expectations not really high nor low but somewhere in between, both the Critic and BH were blown away by the food, which is on the level of some of the best they have tried in Merida, and if you are fan of Mexican food prepared with imagination, creativity, and attention to detail, you are in for a treat.

The room itself is a mixup of an art gallery – there is all kinds of art on the walls – cantina and restaurant. Real tables and chairs, cool and dark, and music videos on the television monitors.

Service is a little distracted until Salvador, one of the owners, shows up and then things improve dramatically. When asked what beers they had, the answer was “Sol y Lager” and when asked for more detail and what other beers there were, as in artisanal beers, the information became a little more detailed. La Cantina offers a chocolate stout and an IPA by Tatich, a local craft beer. The Critic ordered the dark which was a delicious accompaniment to the food that followed. 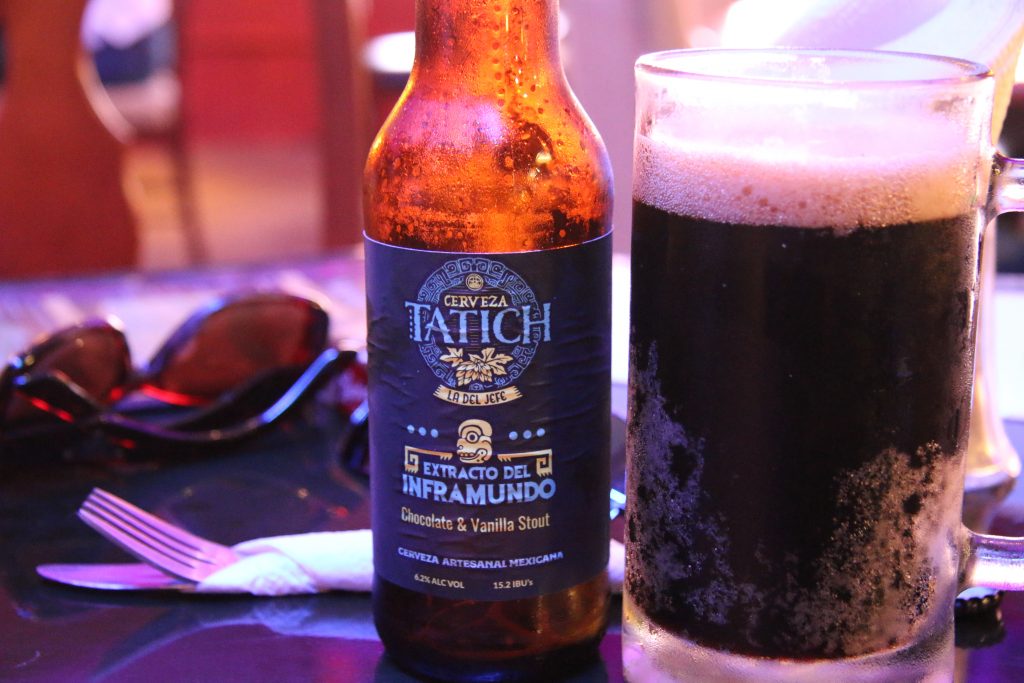 Salvador told the Critic that the idea of the restaurant/cantina is to provide guests with a relaxing space where the beer is cold and not expensive (at $25 pesos it’s much cheaper than other places that serve free botanas) but with excellent food also at a reasonable price. A place you can visit 2 or more times a week and not break your pocketbook. And the food, dear readers, is truly amazing! Ingredients and recipe ideas from all over Mexico -guacamole w mezcal anyone? – are combined with Yucatecan influences to create original, delicious dishes that are generously portioned and extremely satisfying. You will not feel you are in a normal cantina; this is a much more gourmet experience and will please the most ardent foodie.

Enjoy the photos and come to eat here soon! La Galeria Cantina Artesanal is located on the corner of 54 and 35, very close to the CMA hospital just down the street, and open from 1-11 PM. Credit cards and cash are accepted. 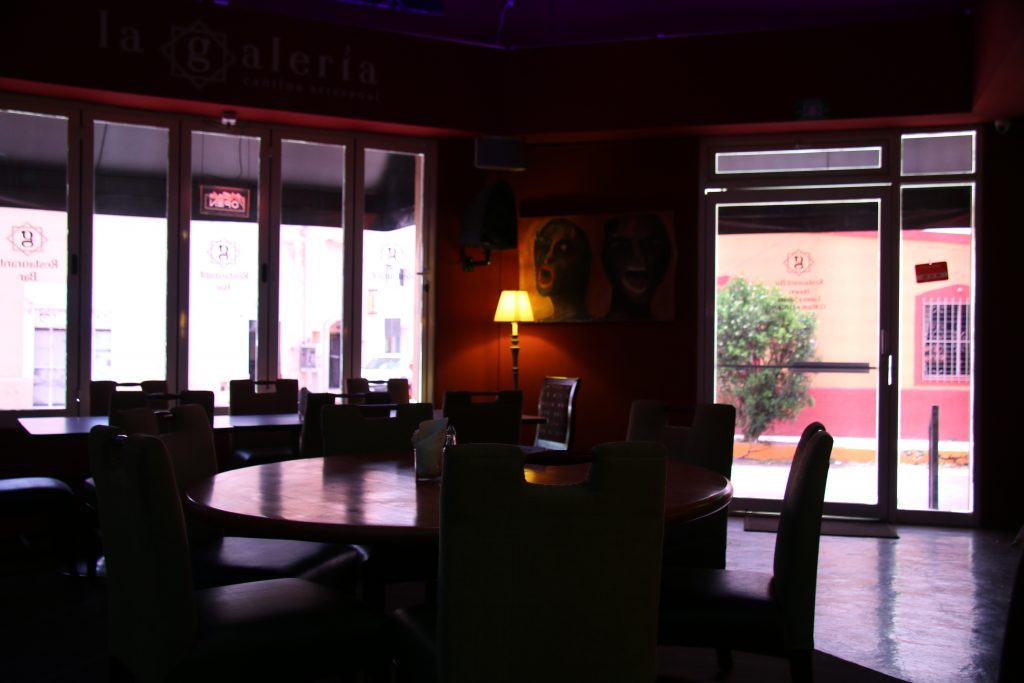 A dark cool place to escape the midday heat 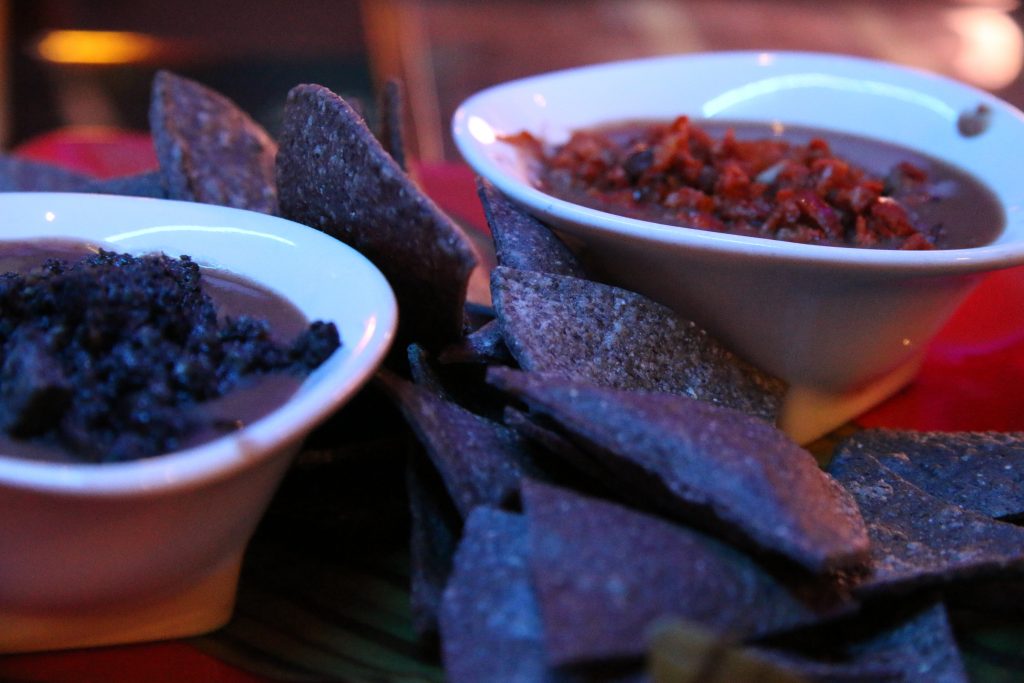 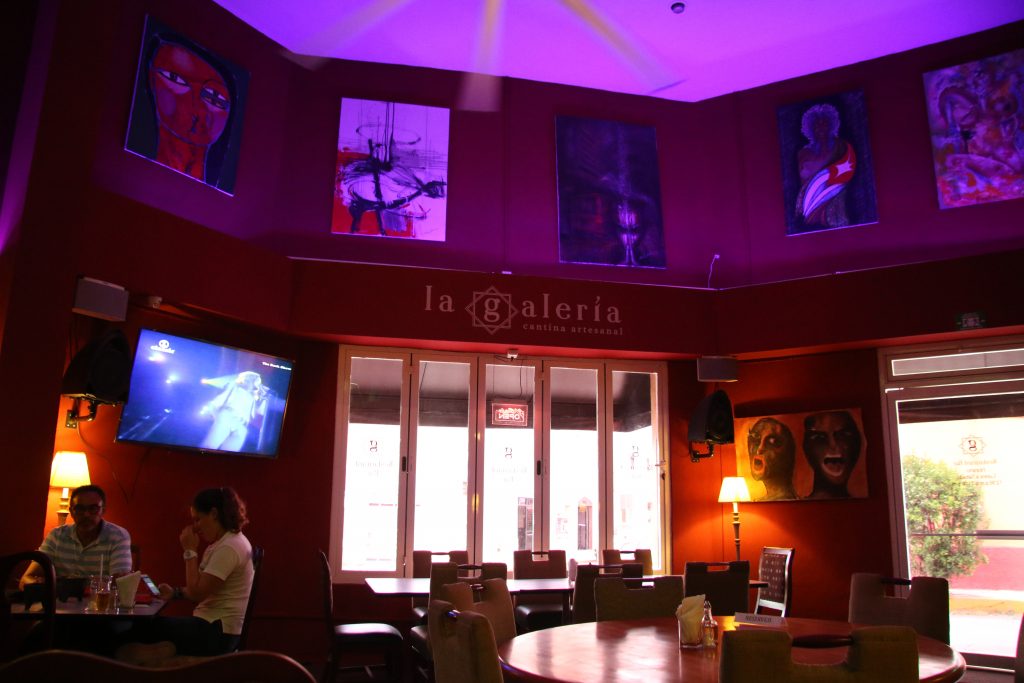 The room. Plenty of art everywhere 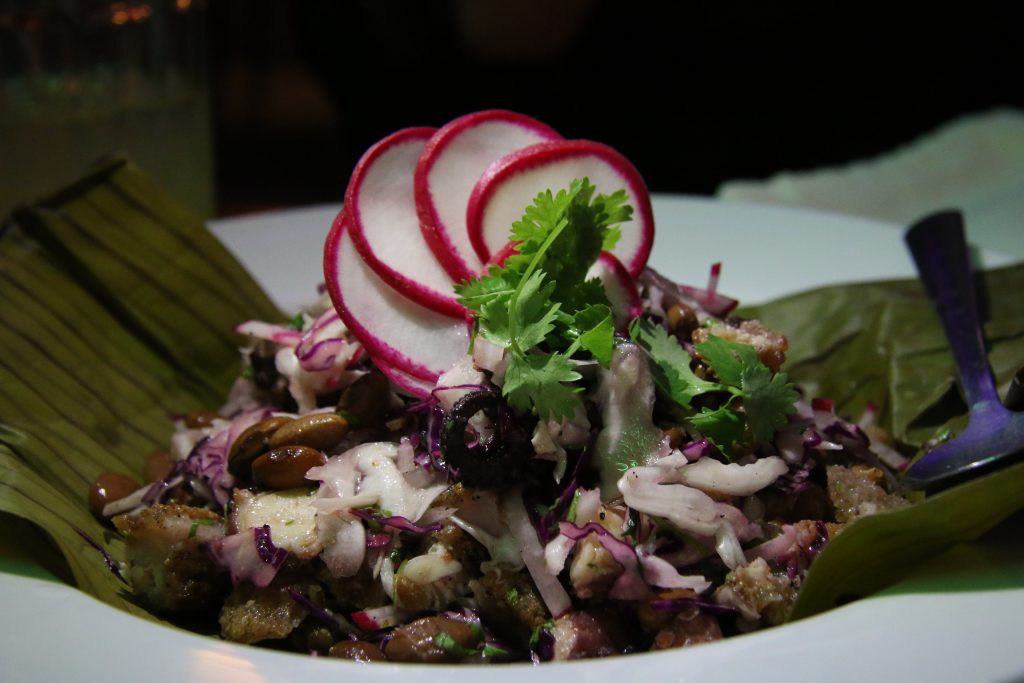 Castacan con pulpo salad. This dish is gigantic and can be shared among many. Not to be missed! 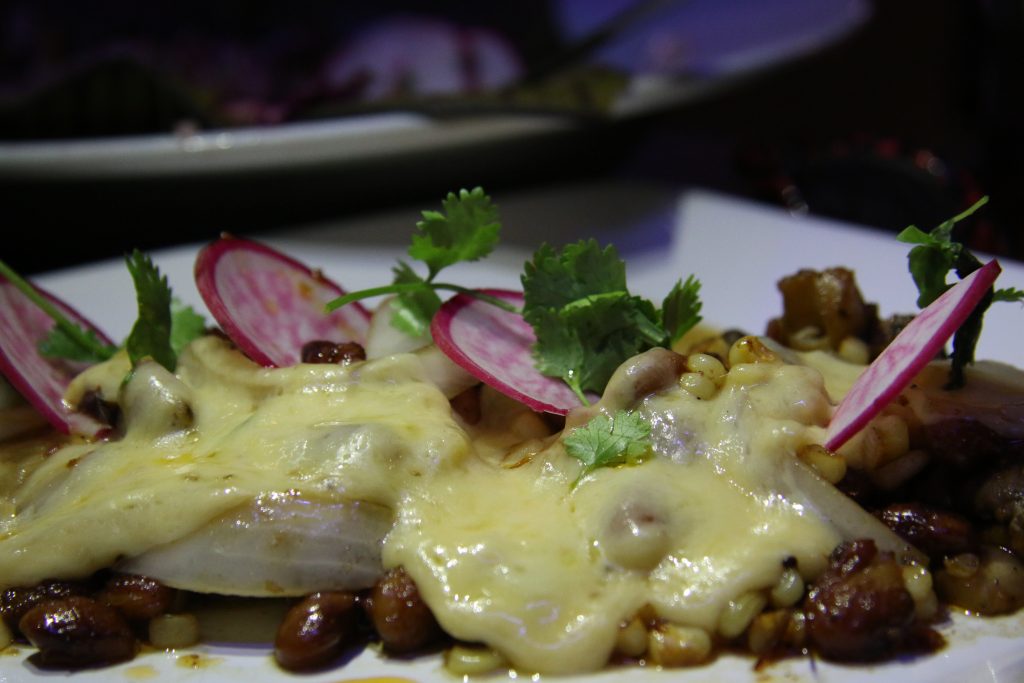 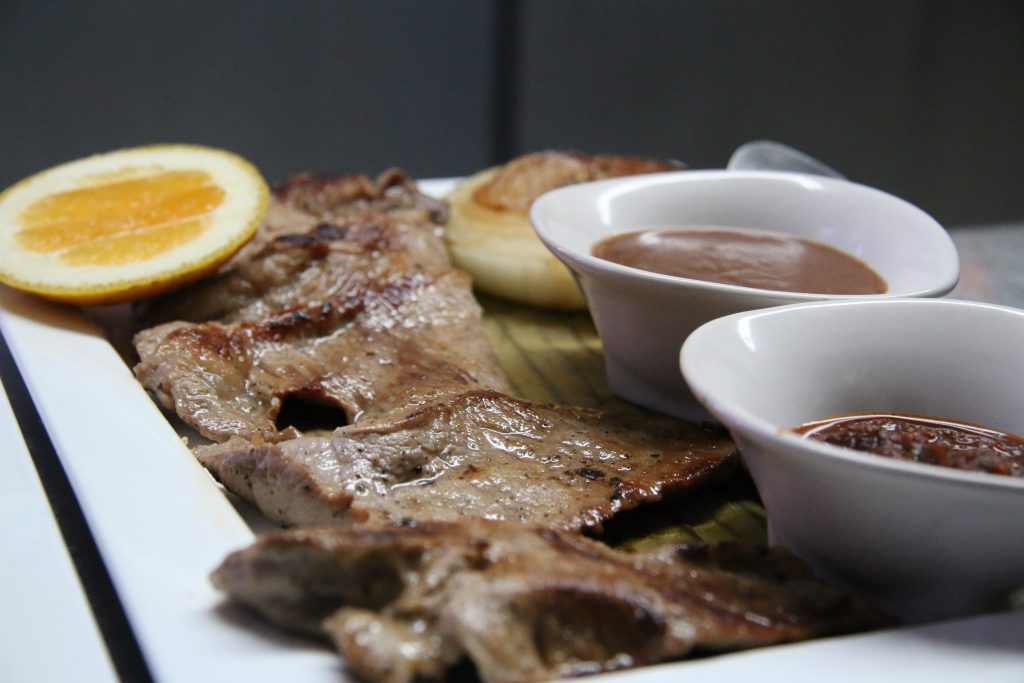 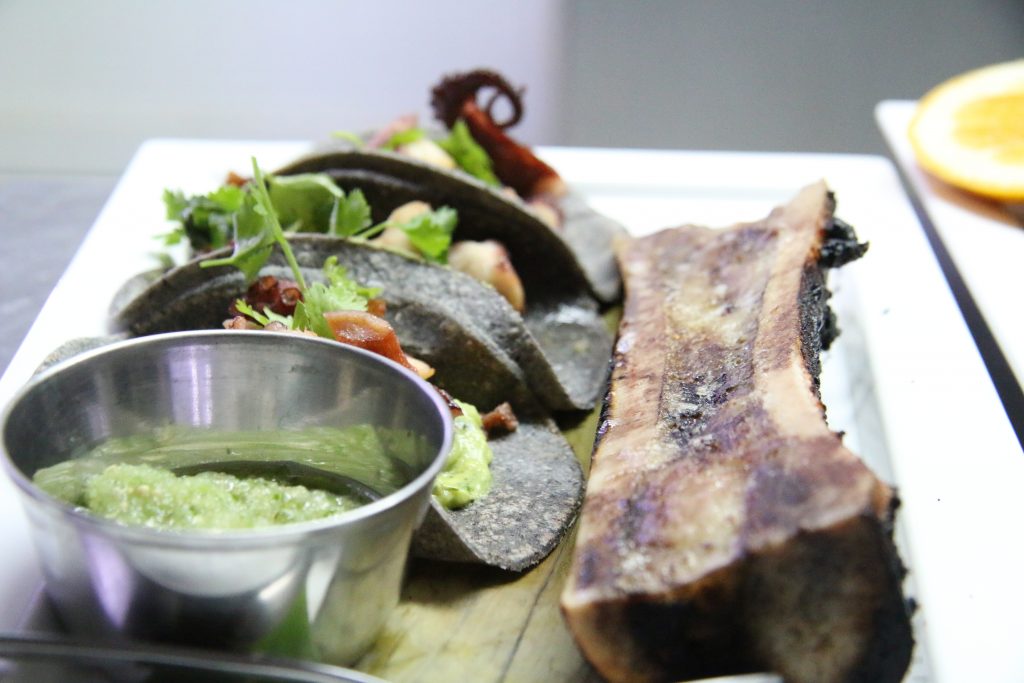 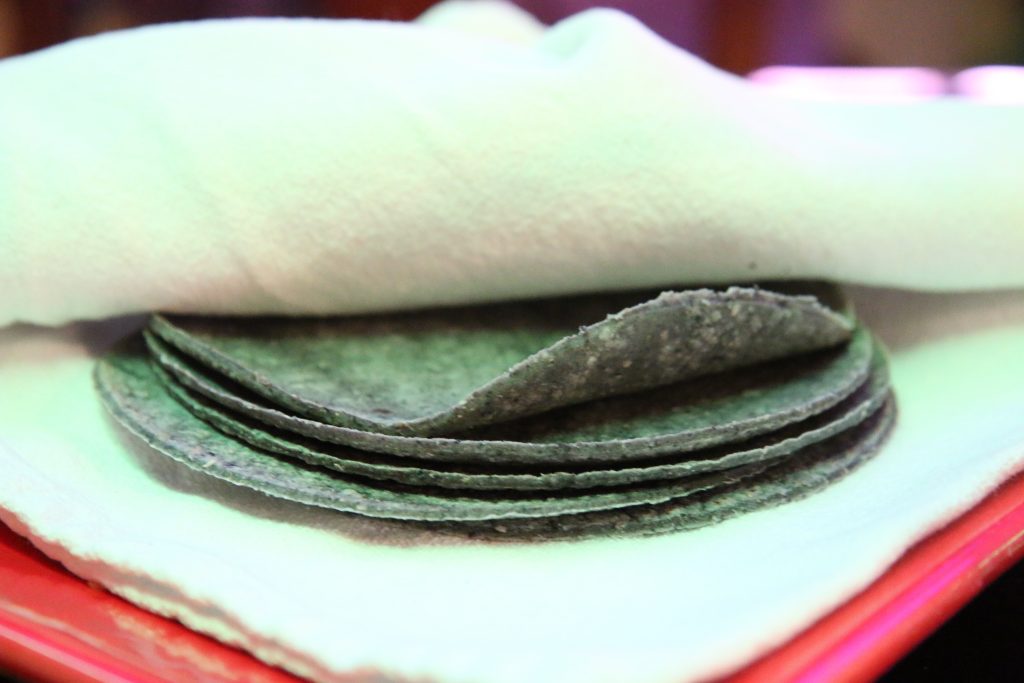 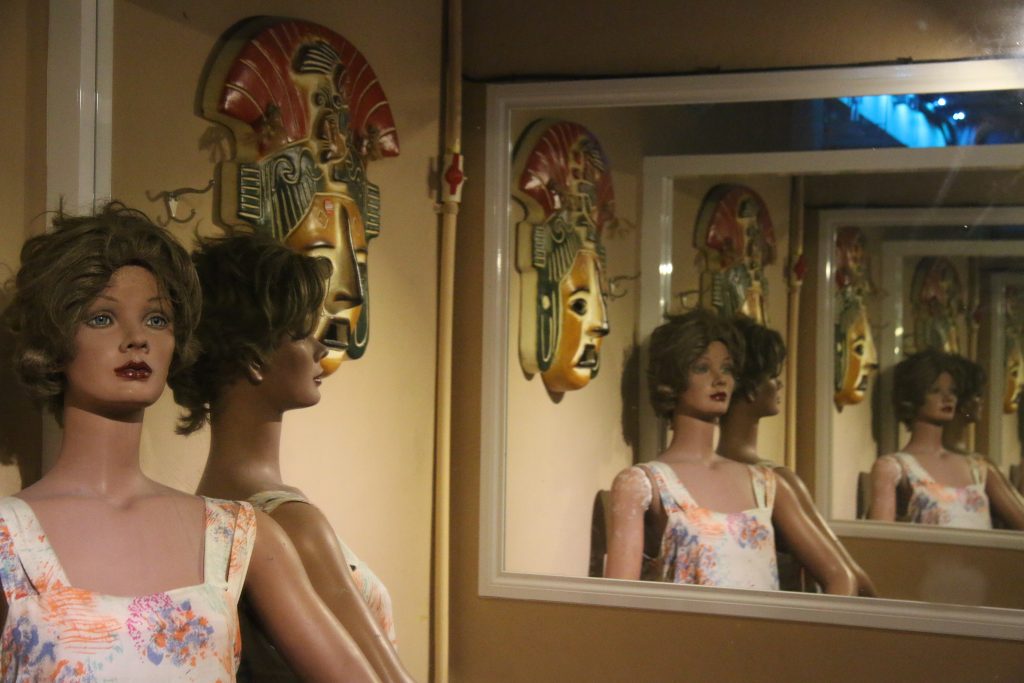 The men’s bathroom is worth visiting, truly 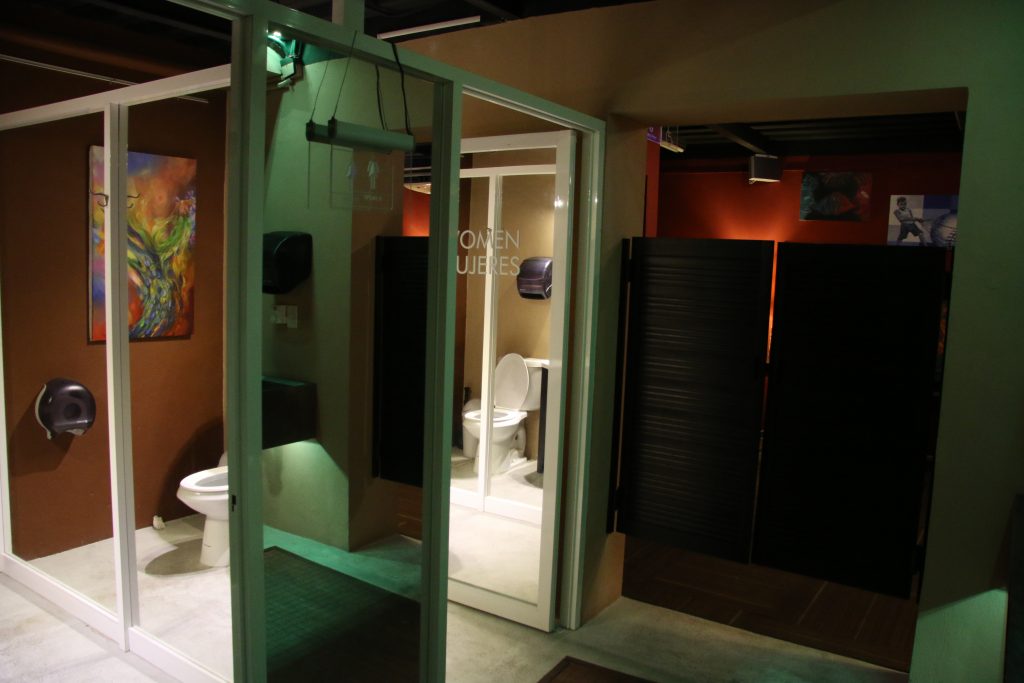 Entry to the bathrooms; if you’ve had too much to drink, you might find all the glass and mirrors somewhat disorienting. But this is the nicest baño you will ever find in a cantina, guaranteed. 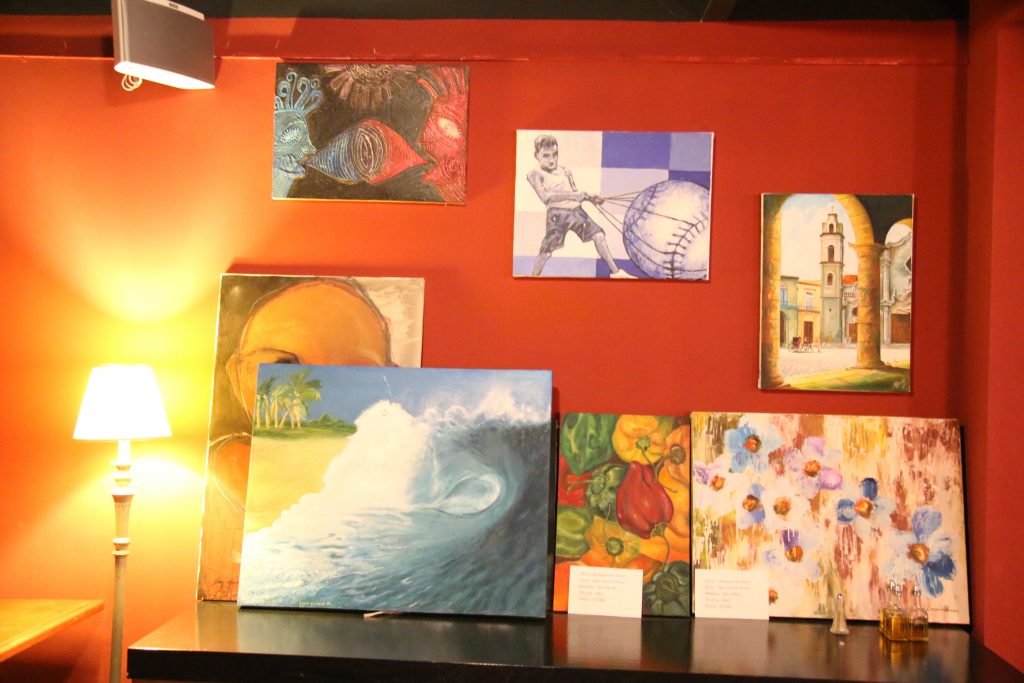 More art on the walls! 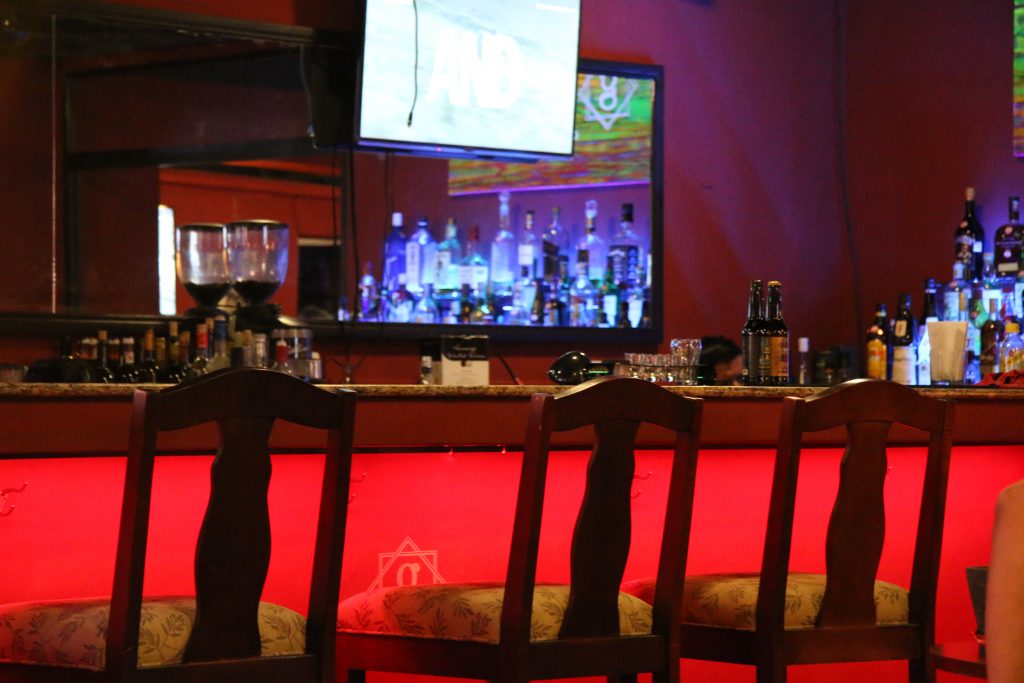 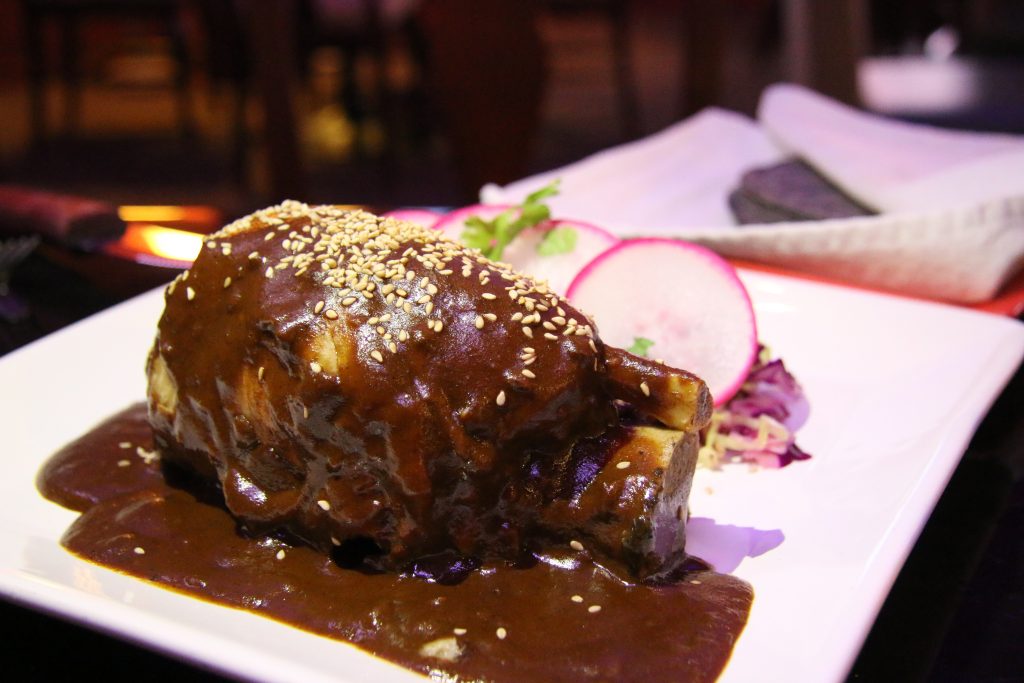 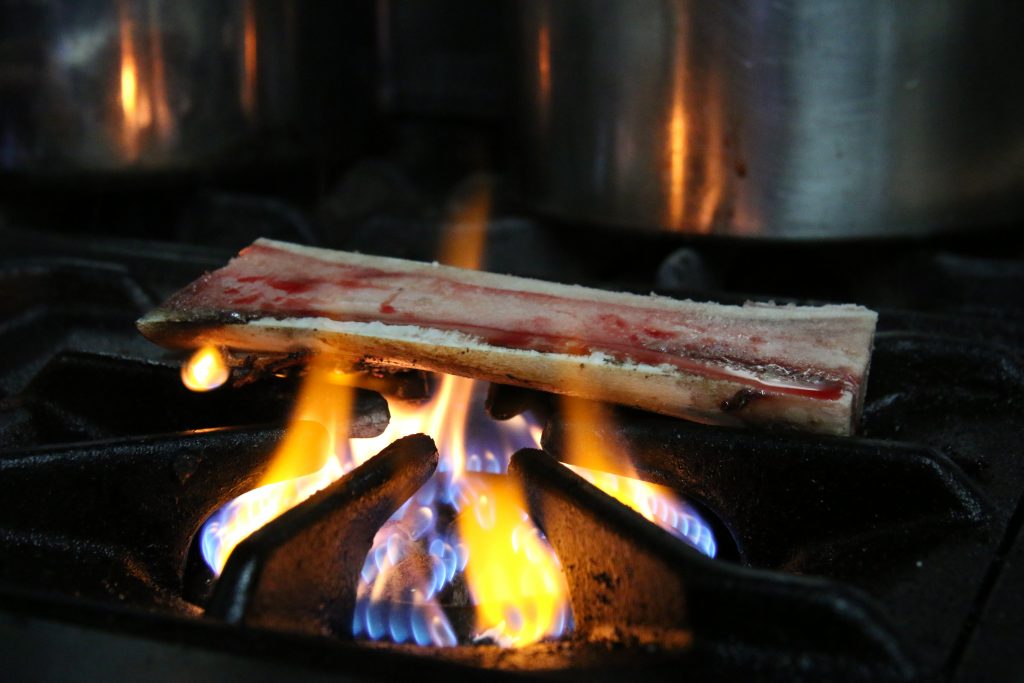 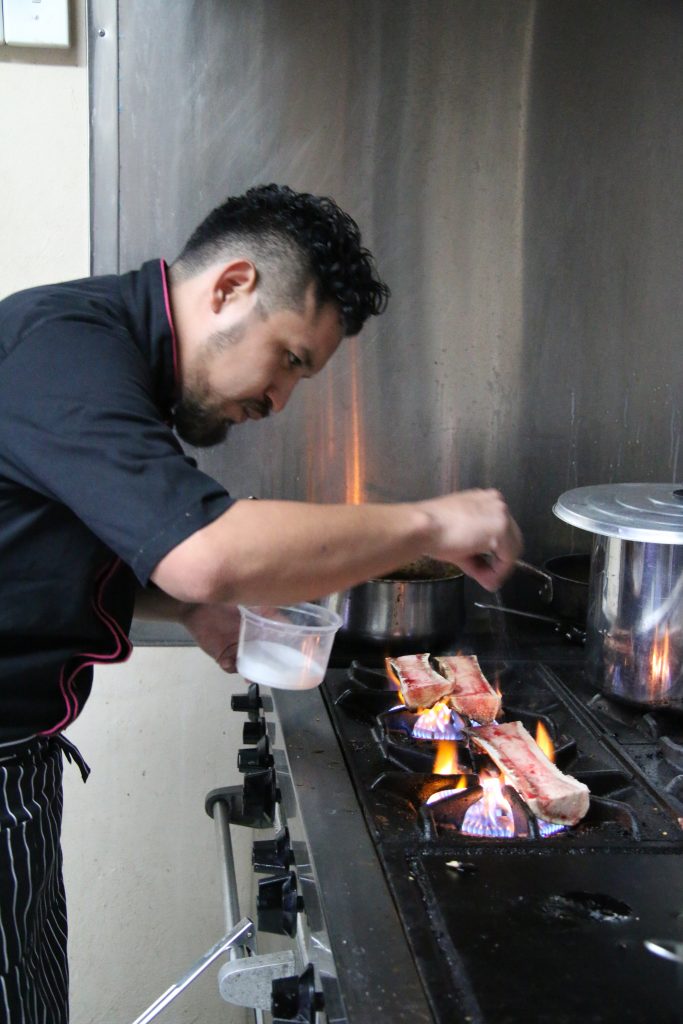 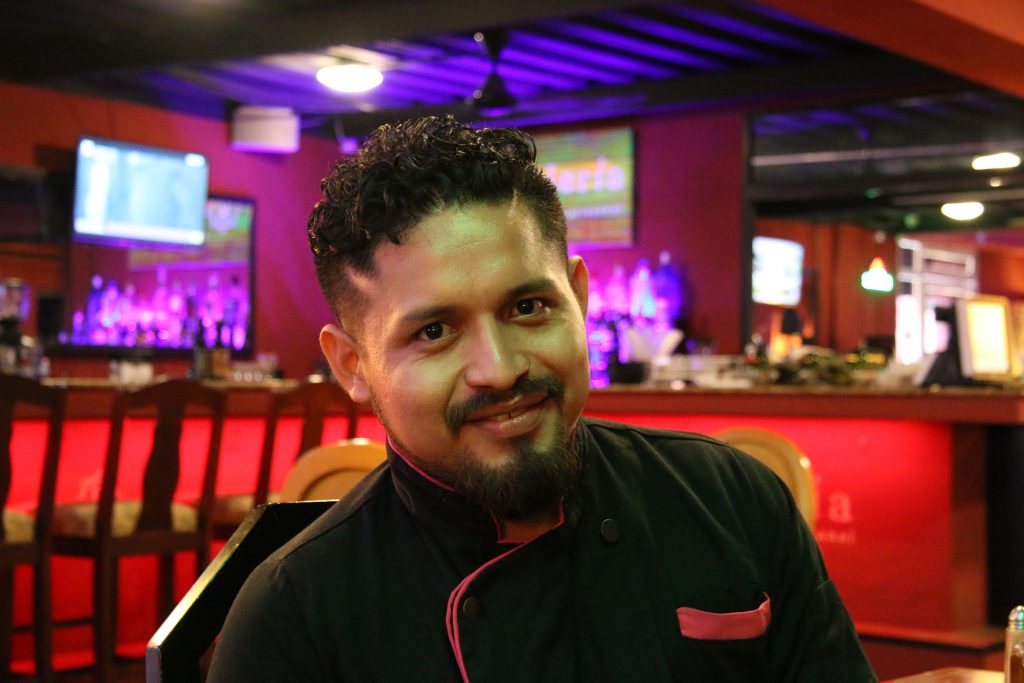 The Man behind the Magic, Miguel Uicab