While the world – and even some enlightened parts of the united states of America – gets it’s collective head around the idea that the climate seems to be affected by human activity – duh – things in Campeche are moving in another direction.

The Diario de Yucatan reports that students are upset about the recent ‘trimming’ of the trees at the Universidad Autonoma de Campeche. 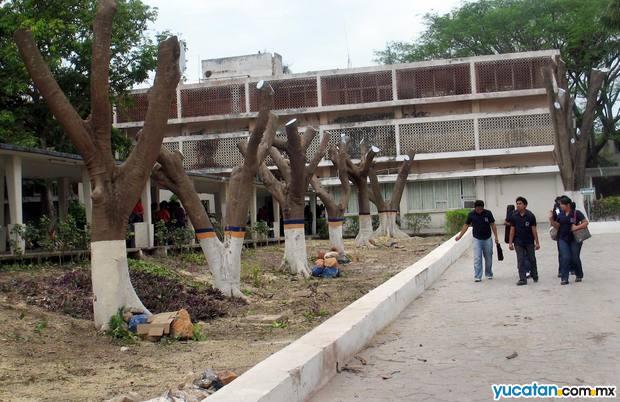 No kidding! Look at the photos in the Diario article online, one of which is used in this post. In the far away, dreamy land of Campeche, climate change is not on the agenda, it would seem, and of course it is so cool there that no shade is required. And those nasty x’kaues that poop all over the place; well, the hell with them and their noisy racket!

These are not Halliburton employees on a mission to drill oil; these are supposedly well-read university people. Unbelievable.

And dare I ask what the students or teachers were doing while the cutting was going on? Could no one lift a finger or did they magically do all this ‘trimming’ in one night and no one heard a thing?

Felicidades Campeche! Every once in a while someone in Campeche insists on doing or saying something that is so… well, Campechano.

Many Mexicans were surprised that there was no ‘prorroga‘ (extension) on the deadline for registering your cell phone; in fact, anyone who has lived in this country for any length of time knows that any new law requiring anything to be done on the part of the populace, ends up getting postponed and those who rushed to comply on time feel foolish, cheated and are laughed at by the more seasoned pros who knew that the deadline was not really that firm.

You might remember when former president Fox announced his ‘borron y cuenta nueva‘ tax program, essentially forgiving fines and back taxes on those who had not paid their federal taxes. Those of us who did pay their taxes felt like a bunch of idiots as the tax cheats laughed their way to the bank.

Water bills? Same thing. The JAPAY regularly forgave debt in order to invite customers to get back on track. While some of these folks might have had real economic troubles, a great number of them did not and simply abused – and continue to abuse – the system.

Well, everyone expected the deadline for the cell phones to be extended and were indeed surprised when it was not. Lineups at TelCel offices were long and the whole RENAUT system collapsed under the pressure of so many people doing last minute registering via text message.

Meanwhile, the question of whether this idea was really that great in the first place has come up. Turns out that a good number of people registered their cell phones in the name of Felipe Calderon (president) and many more registered them in the name of someone else (read more on this here). You perhaps? You’ll never know, unless a crime is committed somewhere with that phone and you get the knock on the door – if they are polite; if not, they will kick it in, to use a phrase by our illustrious governor.

And now, the major player in the cell phone market in Mexico, TelCel, has announced that it has in place an ‘amparo‘ which is essentially a legalistic delay tactic that permits them to NOT cancel any unregistered cell phone accounts, as the law dictates it should. Telefónica, another cell phone provider here is in the process of doing the same. It is difficult to imagine the “powers” that be telling Carlos Slim what he can or cannot do, so it will be interesting to see how the government handles this.

Aren’t you glad you took the time and trouble to register your phone? I know I feel good about it.

For those of you who do not have the privilege of owning a vehicle in Mexico, this will be of little interest.

For those that do, you probably know it already: in Mexico we have to pay a tenencia, or tax just to own a car. This on top of all the other taxes that one must pay in Mexico, this great land where those that pay taxes (30% of the population) pay for the other 70% who either evade taxes completely – those at the top end of the economic spectrum with good fiscal lawyers – and those who are ‘too poor’  at the bottom, because ‘ay poooobres‘ the government and politicians feel sorry for them.  They don’t want to help them, educate, raise the minimum wage, whatever; but they do feel sorry for them. And so they don’t pay taxes either.

Once again I digress. I was talking about the tenencia.
In a nutshell, it is a tax that is based on the value of the car and decreases as the car ages. Implemented in the late 1960’s to pay for the Mexico City Olympics, it turned into such a cash cow that it never went away.

There has been talk about the tax being unconstitutional and the voices, during the 20 years I have lived here, have become louder and more strident; this tax is obsolete ie. the Olympics have been paid for many times over , it is unconstitutional and should be abolished for once and for all.

In the last presidential election campaign, Felipe Calderón promised to eliminate this tax. Today I received an email that explains that he has eliminated the tax at the federal level and has left it up to each state to decide whether or not they want to continue charging this tax. This is why, in a bold and rare move, the state government of Queretaro has eliminated the tenencia tax altogether. Finally, some good news!

So if you are here in the Yucatan and wondering why we pay this onerous tax, know that it is now in the hands of our governor, not Felipe Calderón.