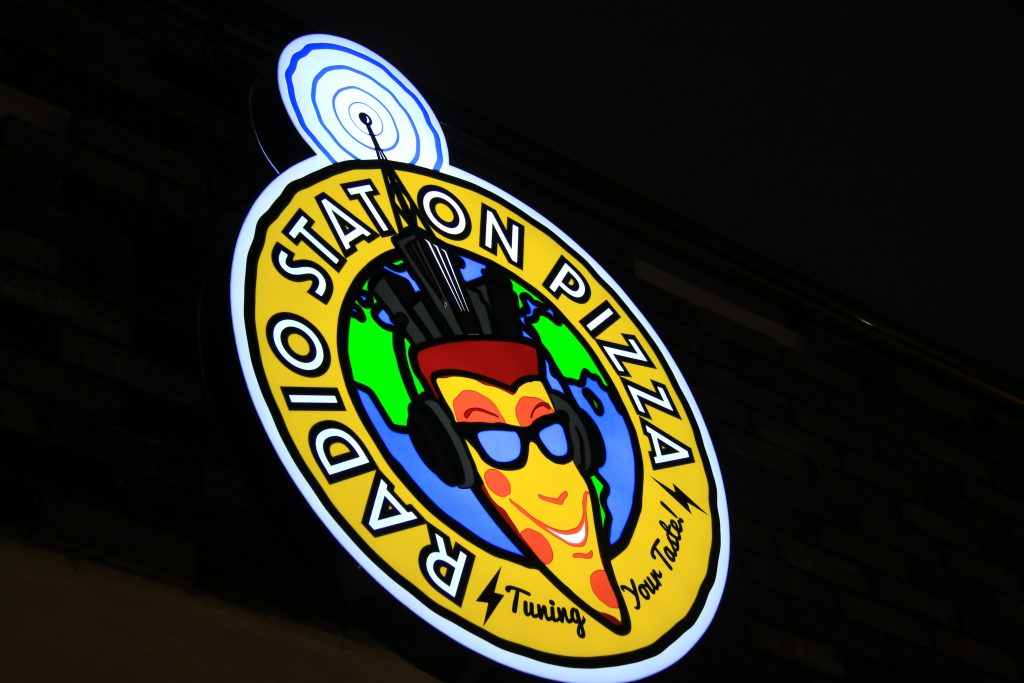 With Better Half (BH) and Cincinnati Girl Invited (CGI)  along for giggles, the Critic visited this brand new pizzeria which is owned by a distant family member.

((begin disclaimer)) If you – dear reader – are wondering what the policy is regarding the reviews of restaurants owned by friends or family, it is this: if the restaurant is crap the Critic will not mention it so as not offend sensibilities and cause massive discussions at Thanksgiving dinners. If it is good however, and worth a visit for the seventeen readers of this column, then the Critic will go ahead and write about it ((end disclaimer)) 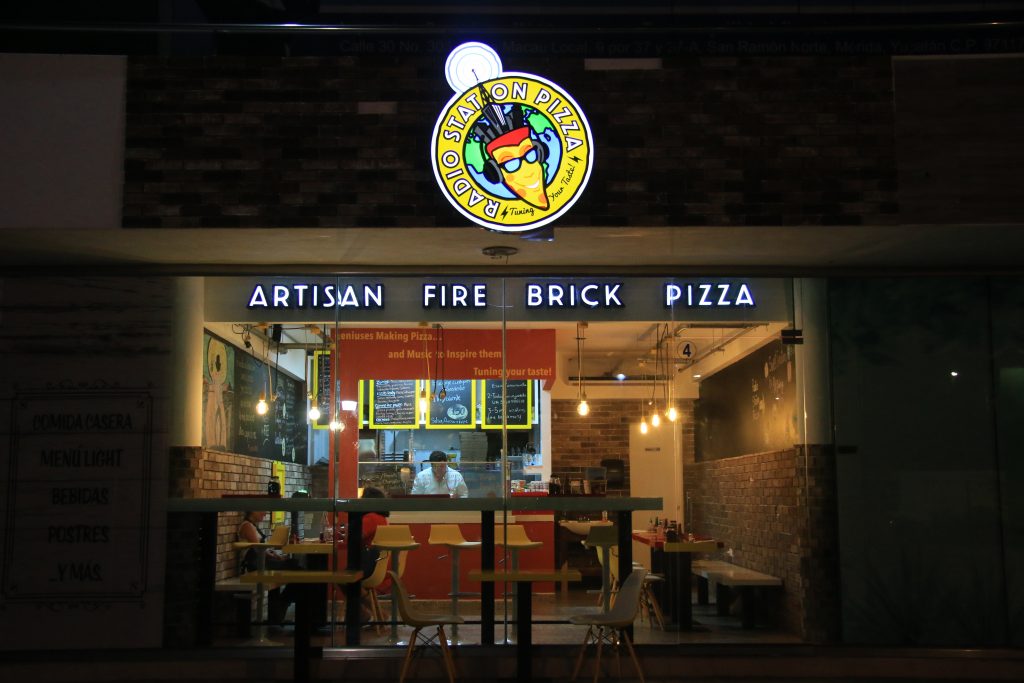 The view from out front

Back to the Radio Station. It is called Radio Station as the owner – let’s call him Rach for now – is a big fan of all things music. He plays in a band. Has regular jam sessions. Loves rock and has traveled extensively. And he loves pizza. So pizza and music = radio station pizza. Signature pizzas are named after rock songs and there are musical referencesthrough out the simple but functional locale.

You can also create your own pizza with plenty of ingredients to choose from. These, by the way, are quality ingredients. The cheese (along with the flour) comes from Italy via Mexico DF. Lomo canadiense (not the Critic’s the stuff you put on the pizza) is the real thing. Pepperoni, salami, mushrooms, sun dried tomatoes. Rach is not going to Super Aki for his ingredients and when you bite into a slice of the pizza you created and that popped out of his brick oven in 3-5 minutes, you will see that this is what makes these pies taste great.

The crust is thin and if you want it cooked normally, it takes about 3 minutes. If you like it charred and crispier (highly recommended) it will be about 5 minutes. 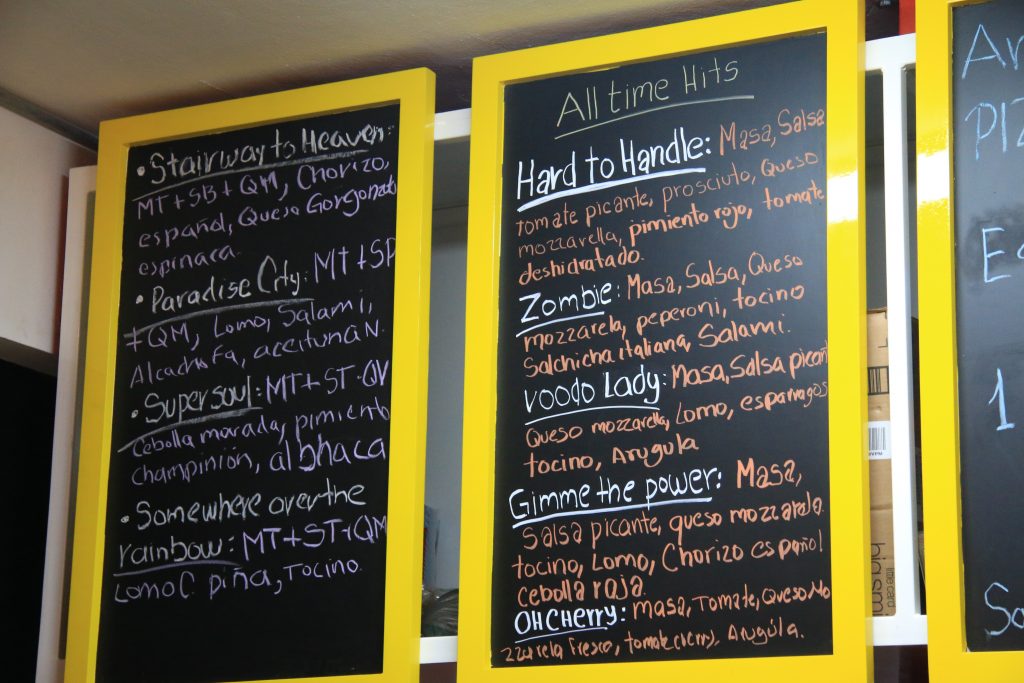 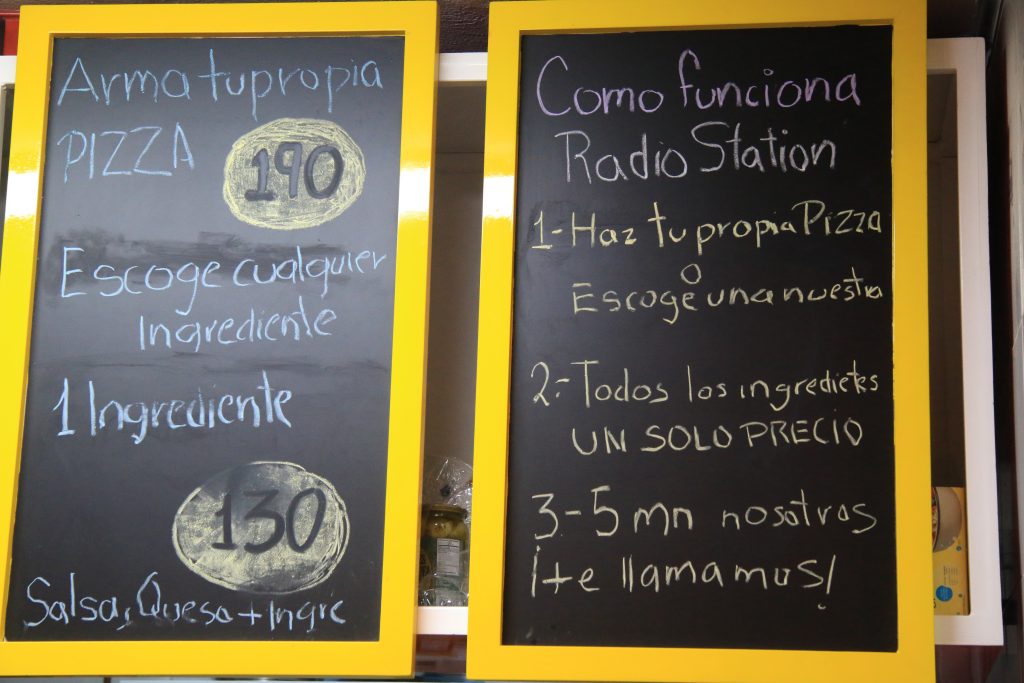 While you wait you can enjoy the music and drink the home-made jamaica, infused with rosemary and brought to your table in glass bottles (no plastic!). No alcohol license just yet, it appears.

To give you an idea, the Critic, BH and CGI had two pizzas, which are ‘one-size-fits-all’ approx 8 inches or so across. Not too huge. Another pizza was ordered to take home to the MiniCritic, who had not come along on this particular outing, preferring to stay home  andhave the food brought to her as is befitting of the queen she is. 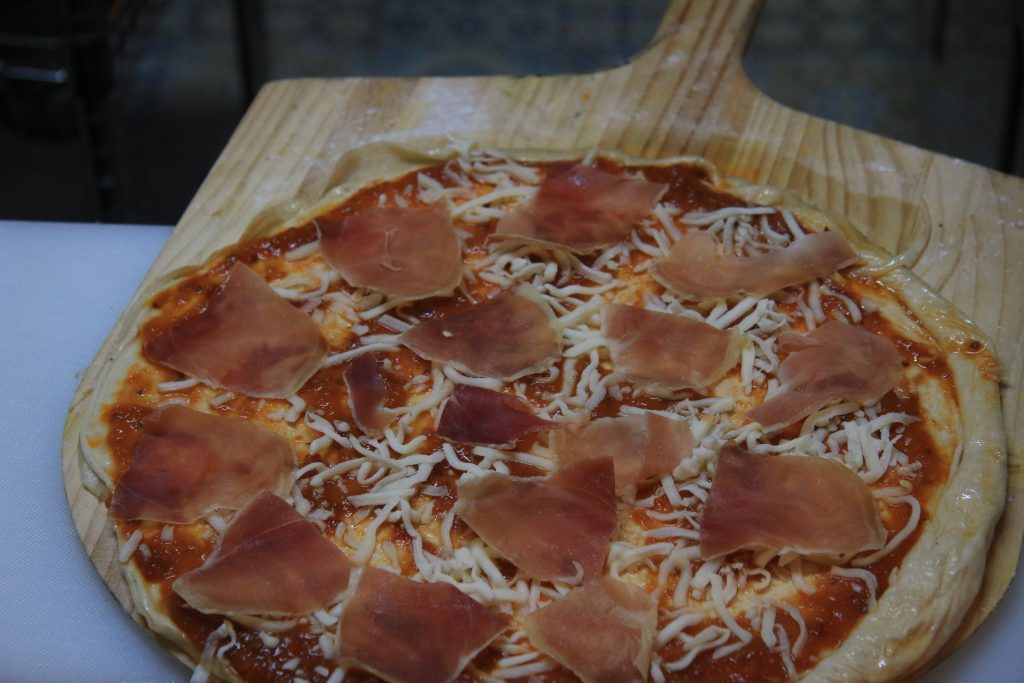 Almost ready for the oven 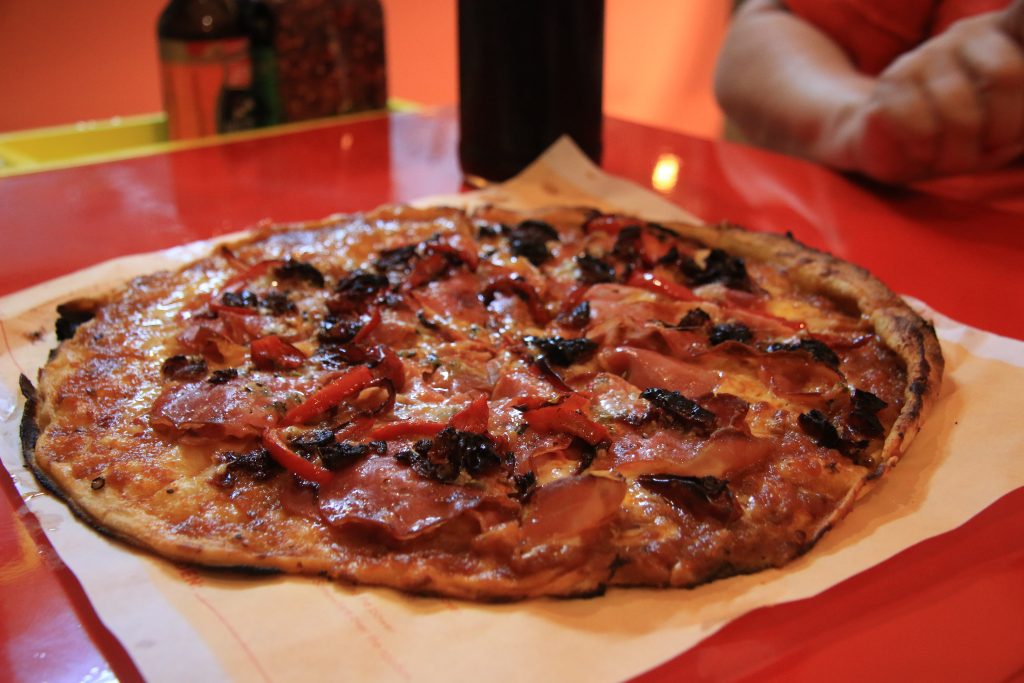 Some meat, gorgonzola, sun dried tomatoes on this one – note the extra crispy crust The Critic can recommend Radio Station Pizza without hesitation, family member or not.

And do save room for dessert – available right next door at Shüteln – which will be dealt with in a separate review. 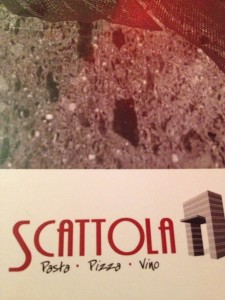 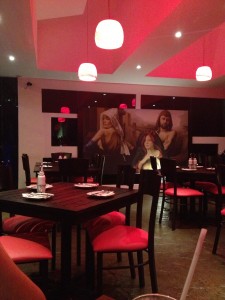 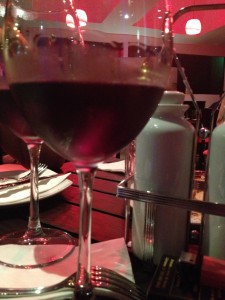 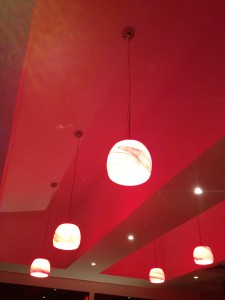 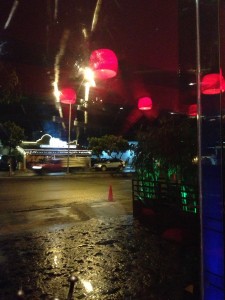 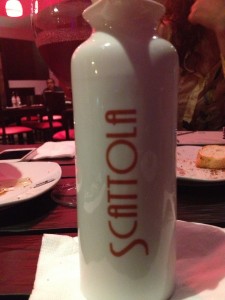 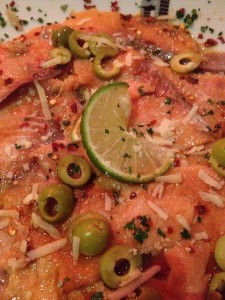 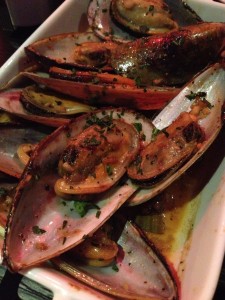 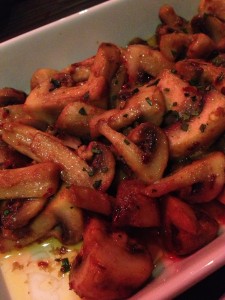 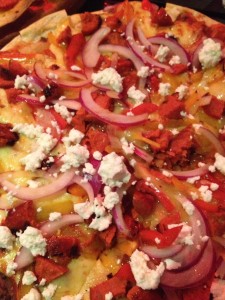 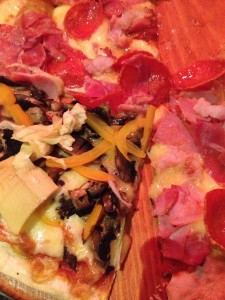 It’s a cross between a bistro and a beach, that’s what!

“Gotta have me some of that” thought the Critic and away he went.

Turns out this here beachstro is not really a bistro but it is on the beach (between Chuburna and Chelem to be exact) and by golly they have pizzas too so the Critic got hisself some of that as well. They bake ’em fresh right there in a big old pizza oven right there in their kitchen too! And the Critic did taste it and found it to be good. The Rocky Road Ice Cream was tasted and it too, passed the test with flying colors.

Now, Cil (or Sil) and Michael said their crust didn’t work out that well that day but you know what, the Critic’s gonna say it was pretty darn good. It’s hard to eat pizza and drive especially with all the new regulations about what y’all are supposed to and not supposed to be doing while you’re driving, but the Critic did pull it off. Also ice cream eatin’ is a challenge, but he’s got that down as well. It’s getting a Tweet in there between bites that’s real hard.

Now there ain’t nowhere to set down and eat right there, but you can get it all to go. So if you are gettin’ just a little tired of eatin’ fried fish for the Nth time on your summer vacation at the beach, well you just go and order yourself some pizza and ice cream.

You can buy the house too, if you want. Ice cream not included.

Well, that (above) was the original post. Pizza, the Casual Restaurant Critic has found, is like wine or your favorite sexual position; everyone has an opinion and they are convinced that their choice is the best. If you like your pizzas with an ultra thin crust, baked to perfection in a wood fired oven to the point where they have little pockets of black charring in some places on the crust, covered with ingredients of the finest quality including delicious meats like Italian sausage, salamis and prosciutto and fine cheeses from Gorgonzola to Parmigiano, then Rafaellos Pizzeria will be your pizzeria of choice from now on.

The Critic has often said that Bostons Pizza makes what is probably Meridas best pizza, and theirs is still a very satisfying option; so much better than the drab, flavorless ultra-hyped pizze mass-produced by Dominos and Pizza Hut, but now this Rafaellos is firmly tied for top spot in the Merida’s Best Pizza category.

The restaurant is tiny and open in the evenings only; there is a small air conditioner that struggles to keep the place cool and the tables are wooden and it just feels like an Italian neighborhood pizza joint, complete with the Italian pizza chef in the kitchen.

The photo below is of the 4 cheese pizza with anchovies. Yum! 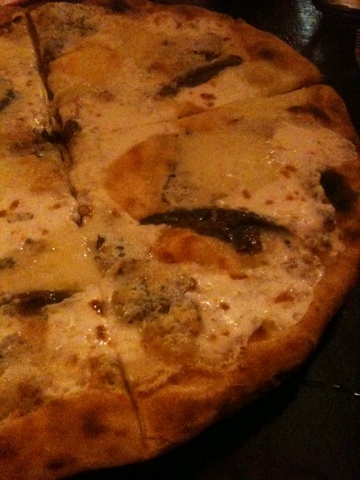