It’s been a while and the Critic offers a most sincere apology for the lapse in communicating restaurant reviews for those 17 readers hungry for information on what’s happening from a Casual Restaurant Critic standpoint.

Reviews of course rely on actually visiting and eating at the establishments to be mentioned and this requires funding, time, and motivation. All three have been sorely lacking of late.

On to Habibi. The Critic and his lovely Better Half visited this Lebanese food restaurant, located in the new City 32 complex, across from City Center, adding new fuel to an already traffic-congested brushfire; this roundabout is to be avoided at all costs most hours of the day. Once you are off the street, however, you will find a tranquil parking lot under the City 32 mirror-glass building.

Up the escalator one level to the lobby of the building and you will be treated to what is probably the most impressive interior design of any office or shopping complex in Merida.

Another escalator ride takes you to the food court level and hotel (Camino Real) entrance. The food court is gorgeous, modeled after the food court of The Plaza hotel in New York. It is remarkably similar and has some interesting food options including Kukis by Maru for all your cookie and carrot cake needs, and a branch of the previously reviewed Pueblo Pibil featuring delectable selections from their authentic Yucatecan menu.

As this he types this, the Critic realizes that he has not mentioned the subject of this article yet: Habibi.

At the lobby level, you will see the new Bachour bakery outlet (cafeteria/restaurant coming soon) and the gold-infused Habibi. Upon entering, one is immediately struck by the opulence of the design and ambiance. It feels very luxurious. It was felt that the greeting at the entrance could be improved beyond the rather non-descript “How can I help you?” offered by one of several mask-wearing hostesses.

The menu seems small and what was ordered were mostly appetizers and starters, from hummus to khachapuri, and it was quickly realized that all this was far too much bread. The hummus awarma was interesting, with a meat option and soft-boiled egg on top which is mashed into the hummus with a fork. Also ordered was a manoushe with shrimp, another bready pizze-like option which was tasty but not over-the top mouthgasms.

For dessert, a dish called knaffeh that features melted cheese, grated bread (yes, more bread) topped with labneh ice cream. A little too rich but perfect with a strong Turkish coffee to finish.

While the food tasted good, there was nothing that blew anyone away. Eric the server was excellent. The wine pour (a Lebanese house wine) seems very much on the tiny size, a swallow or two and your wine is gone.

The images all have that gold-ish tinge to them. Apologies, they are not the best iPhone photos.

So, in a nutshell, great room, good service, average food. The Better Half and Critic will be back for the dinner menu to order some additional (non-bread) items to get a better idea of what the chef (Bachour) is all about in the kitchen.

For better photos, a complete menu and reservation possibilities, click on the opentable link: 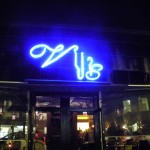 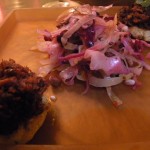 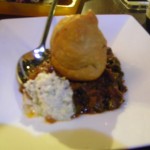