My morning routine, such as it is here in the COVID19 era, involves taking a broom and sweeping the driveway.

In case you don’t live in Yucatan and don’t know, we are at the height of our dry season and many trees are popping seed pods off by the thousands in preparation for the rains that will soon come. Nature is smart that way.

Each morning finds our treed driveway littered with hundreds of cracked open seed pods, their contents strewn randomly and wastefully all over the concrete. These pods are dry and have the consistency of hard plastic. Stepping on them results in a satisfying crunch that will make you jump in anticpation to the next step, just to crunch every pod you can, like a six year old stomping in a puddle. The satisfaction is similar to that achieved when you take that piece of bubble wrap and pop all those delicious bubbles. Step on these hard shells with bare feet however, and you will be reminded of that time you stepped on your kids/cousins/brothers/sisters lego in the middle of the night. Ouch. 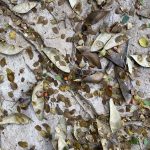 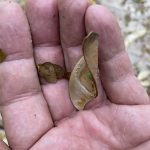 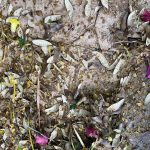 But, once again I digress.

The morning sweep with the headphones on comes after the morning walk and the morning coffee enjoyed by the morning fire. There is a certain satisfaction moving that broom back and forth, hypnotically watching the seeds, leaves and dirt accumulate, while listening to Bill Maher trying to be funny from his backyard and without an audience, or the New York Times Michael Barbaro emphatically interjecting yet another “HMM” during an interview with an enthusiasm usually reserved for Mayan mestizas during a particularly juicy piece of gossip.

Once the sweeping is finished, it’s back to the morning coffee and attending to pressing decisions about what to cook for the day’s lunch, whether or not it’s garbage day, washing whites or colors, or any number of mundane tasks that could be undertaken to take my mind off the fact that this situation is dragging on and on (and on) and I have no legit means of income and what will happen when my meager savings are used up and my credit cards limits have been saturated…

Here in the charming area that I live in with my lovely Better Half, we are blessed with enough terreno to be able to have a variety of local vegetation including many a tree, on the property. I in turn am blessed with a forward-thinking Yucatecan who is not only good looking and smart, but also atypical in her appreciation for the flaky barked chaka, the honey bee attracting dzidzilche, the lush green jabin and spiny chukum and who early on in our relationship agreed with the idea of leaving the local trees on the property, rather than adopt the accepted local method of bulldozing and burning.

As the years have gone by, our selection of trees as well as the variety of smaller plants, has grown. From a ramon taken from a property behind one of our stores in the Felipe Carrillo Puerto part of town to coconut palms rescued from an earlier home that was bulldozed over to make way for a parking lot to towering yellow bamboo from Cuernavaca from Better Halfs grandmother to… the list goes on.

One of these later additions is a trio of mango trees, that popped up on their own as a result of our rather haphazard composting methods which involve taking the mornings fruit peelings, coffee grounds and egg shells and tossing them under the trees around the edge of the property where the lizards, birds and worms do their thing. Well, during one mango season, several of the mango pits (?) we had tossed actually became trees and this year, the trio, which has grown vigorously and has reached rooftop height, yielded a small basketful of delicious mangoes; not just one kind, but two varieties!

If you are about to stop reading in disgust at the cloying sweetness of this little story, I understand. But fear not, because I am about to introduce to you the antagonist in today’s rant, er story.

Next door neighbors, wouldn’t you know. Let’s call them the AN’s. Not because they are Vietnamese but because they are Anal Neighbors. AN’s for short. These are the folks who need to have every. single. thing. in it’s right and proper place in it’s right and proper position and… well, you get the picture. Each morning at 7 AM their mozo serenades the area with the whine of a vacuum cleaner on ‘high’ with which all four luxury vehicles are vacuumed. This happens 6 days a week and it is a wonder that there is any carpet fiber left in that automotive carpet.

Relations, initially cordial enough, over the 10 foot dividing wall (built by yours truly on our land) between the two properties had already been strained in the past when one of the huge palma real (Royal Palm) fronds crashed down on said wall, knocking out a (rather chintzy) lamp on the neighbors side of the wall on our property and causing great grief to Mrs AN.

“How could you not see this was going to happen!?” she angrily yelled at our gardener  as it is infinitely easier to yell at someone’s employee than at your neighbor who might answer back. “I TOLD you these fronds were going to fall!” Our gardener shrugged.

The tree you see, is on our side of the wall. Better Half, feeling motivated to smooth over any misunderstanding offered to cut down the offending oxygen producing tree but Mrs. AN quickly countered with “It’s not about THAT” to make it clear that she LOVES trees and wouldn’t have a tree sacrificed on HER account.

This week, one morning when Better Half was waiting for the coffee to percolate, she noticed it was rather clear along the side of the wall where the AN’s have their swimming pool. Sure enough, the ANs had (apparently) commissioned their vacuuming mozo/gardener/aspiring horticulturist to clear some branches that were hanging in the vicinity of their swimming pool and this machete-wielding Mayan with the sensibilities of a Donald Trump hacked away at the trees on our property leaving stumps where two of the three mangoes stood, along with several other tree casualties.

After the initial shock and resulting fury, there followed a neighborly chat/visit where things were patched up somewhat and the end of the story will probably mean the demise of said mangoes in the interest of neighborly relations. To which Mrs. AN will loudly emit protesting sounds while secretly happy that no leaf will contaminate her pristine pool and garden tableau.

The whole incident also had me reflecting on the bigger concept of trees vs man and got me to wondering how annoying can it really be to have some leaves in your swimming pool? Is it really that much of a tragedy to have a leaf brush up against you while swimming that you would have to chop down anything in the vicinity? Are you expecting the Home and Gardens photographer to show up without telling you first? What?

And when clearing or widening streets and putting in sidewalks: where does it say that a road cannot go around a tree, or a sidewalk skirt it; why is it necessary to sacrifice a large, healthy tree for the sake of a ‘straight’ road. Cars have steering wheels do they not? People can walk around a tree can’t they?

This little tale is also a reminder that it’s healthy – and in your interest – to love thy neighbor, or at least tolerate them; as my Better Half points out, if you have a problem or some sort of emergency, it is much more likely that your neighbor will be around to help you well before any friends or family can get to you. A point which she also stressed to the AN’s and which hopefully sank in so that they will feel free to come over and discuss any future tree trimming with us before asking their employee to undertake said trimming on their behalf. 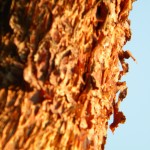 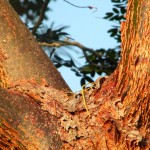 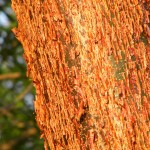 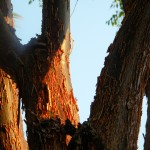 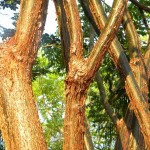 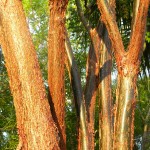 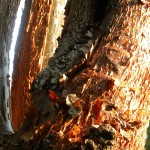