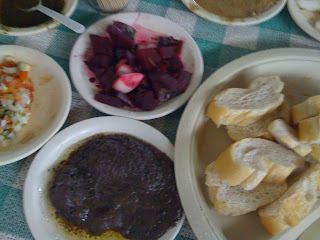 From the sublime to the ridiculous might be the title of this post, in which the Casual Restaurant Critic, after visiting La Recova the other day, along with the BH and the MC dropped by La Carreta Cubana II for some Yucatecan food in the form of botanas which are served (as they are in Heladios and a million other cantina crossover restaurants in Merida) along with a drink order.

This local hangout, kind of run down and a little on the dirty side is tucked away in a neighborhood between Plaza Fiesta area and Prolongación Paseo de Montejo and is not worth seeking out. It may be a local favorite (at least for some locals) and it is cheap, but the food is nothing to write home about, the service is mediocre at best and the ambience is nil, a few notches below the point where charming becomes just plain ugly.

A round of beers means that you get a sampling of botana (snacks or tapas) which consisted of the following (more or less):

Are you smacking your lips yet? OK, admittedly this is not Nectar but still, the whole experience was less than satisfying. The plates are the beig colored plastic ones, some with cracks and chips along with a few porcelain cup saucers.

An order of relleno negro and cochinita came but it was completely un-exceptional and the cold machine made or store bought or whatever tortillas were a complete turn-off.

There are a billion places like this in Merida where the biggest draw is how cheap it is. This lunch was about $100 pesos. Cheap doesn’t have to be synonymous with this however. Look at La Susana in Kanasin. It’s ridiculously cheap but is nowhere near the dumpiness of this place.

If you want to try this traditional Yucatecan lunch, go to Heladios or Los Henequenes.

On a scale of one to five, this place rates a solid 1.