Tacos PM is another one of about a gazillion taco places in Merida that serves mostly Mexico City street food; the almighty taco is king. 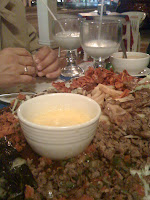 What makes this place stand out from the rest is that as soon as you sit down at one of their locations (the latest one the Critic tried was in Pensiones, near the Plaza de las Americas) is that plate of watery refried beans and warm (yes warm!) tostadas or corn chips to the uninitiated. The fact that they warm them says they care enough to make sure the chips aren’t soggy when they get to you. Merida is a very humid place which makes anything crisp turn soft once the package has been opened and far fancier places like the horrendous and pricey Fogoncito chain can’t get this into their thick skulls. There is nothing worse than biting down on a corn chip, expecting a crunch and getting instead a soft chew. Ugh.

And those refried beans spread on that plate are seasoned (or maybe it’s because the Critic is always hungry when he sits down for a snack at PM) in such a way that you cannot stop eating them! And you can ask for another plate if you finish yours too quickly.

From the menu there is a huge platter that the Critic and Co tried last night; way too much food for 8 people (two were ordered). Everything but the kitchen sink is on this platter, all chopped and ready to be stuffed into either corn (handmade!!) or flour tortillas.

Guaranteed good food, they make an effort with the service, and reasonable prices.

One thought on “Tacos PM”