In the company of the charming and always gastronomically adventurous Better Half, the Casual Restaurant Critic mustered up the strength to shower, get dressed and go out for breakfast on this fine Easter Sunday morning. Two restaurants were visited, in the interest of coming up with some new options for the 11 constant readers of this column and to take advantage of a lazy Sunday (and the fact that the Critic was freshly showered)

This is a new restaurant, in yet another small shopping plaza, this one called “Luxury Plaza” on that stretch of northern Merida road that starts at the “pocito” roundabout and ends where CityCenter meets the periferico. It never ceases to amaze the Critic at how many shopping plazas there are along these few kilometers – at last count there were more than 20, of varying styles, sizes and all sporting the same L shape so popular among Merida plazas. It is also amazing that all these luxury and exclusive and VIP places still have clientele; there are so many offerings for this tiny market segment.

A Puro Pan is all about bread, hence it’s name. Freshly baked bread and plenty of sandwich options are on the menu and for breakfast, some egg items as well. The Critic chose the Spanish baguette on Parmesan bread while the Better Half ordered Eggs Benedict.

Now you can’t go wrong with jamon serrano (unless you are unlucky enough to order it at the Viejo Molino – ugh) and so here, the Spanish baguette was just fine, a smallish baguette-like bread with plenty of jamon, some inexpensive local cheese. Nothing to write home about and the accompanying salad – some lettuce of varying styles possibly of the pre-washed plastic bag variety – showed signs of browning around some of the leaves and so was a little less than appetizing and the Critic did not finish his vegetables.

The Eggs Benedict however, were about as Benedict-y as the Caesar salad is Caesar-y at Trotters. In other words, not really Eggs Benedict. Eggs were baked in what appeared to be little muffin cups; not poached. Accompanied by some breakfast potatoes and atop something that looked like an English muffin and some salmon, there was no evidence of any hollandaise sauce lurking under, among or on top of the eggs, so not sure what the restaurant is trying to do with this menu item. It is not unattractively presented but, call it Puro Pan Eggs or something else, por favor.

Service was extremely nice and attentive. The room itself is dark, with low lighting which is fine for mornings when the Critic is less than presentable and doesn’t want to be in the harsh glare of the lights. Air conditioning was minimal and the place was cool but on the edge of a little warm, if you know how that feels.

After breakfast there, Better Half suggested checking out another new spot called Merci. 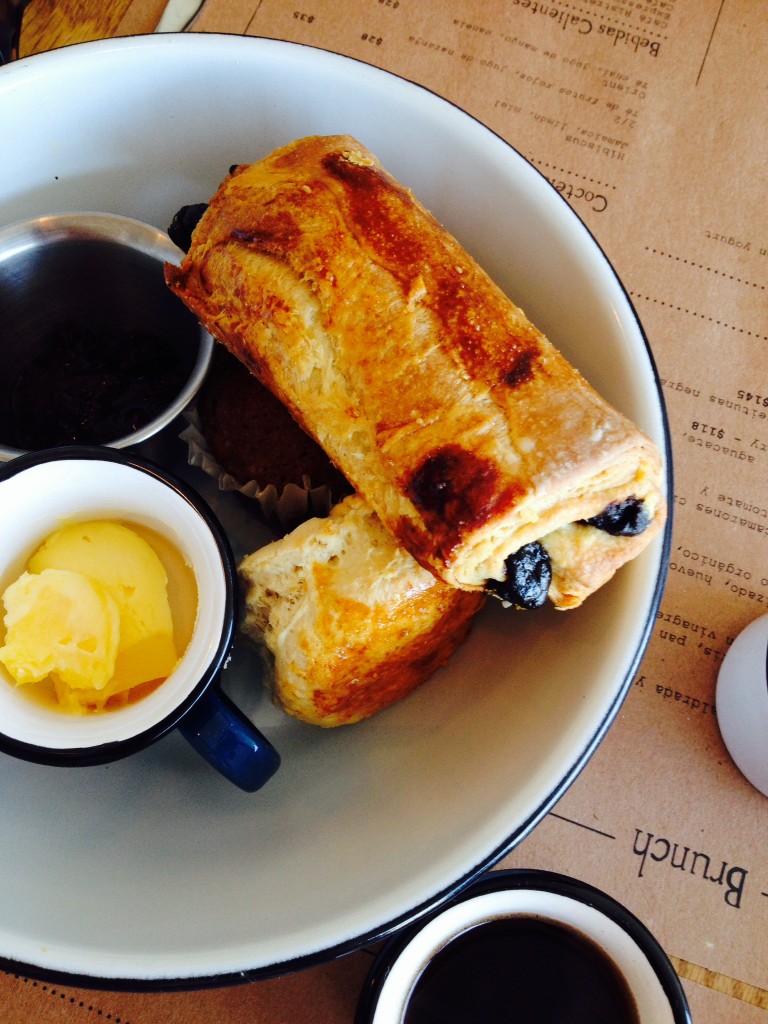 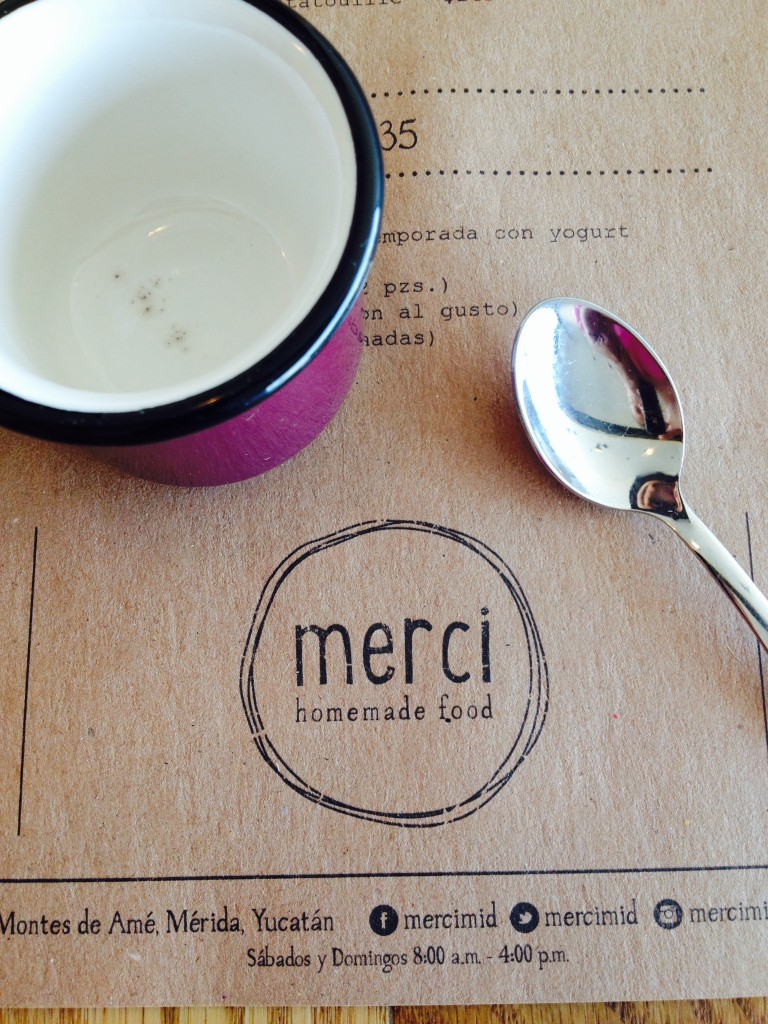 Merci is located in the San Angelo shopping (more luxury of course) plaza, which is near the soon-to-be-finished San Angelo condos, yet another housing development in northern Merida defining itself as – yawn – exclusive, and located parallel to the periferico in the area between City Center and Sodzil.

It is a bright, airy restaurant with a decidedly French feel, not only because the waiter is indeed French but also because the Yucatecan chef studied in France and has come home to feed her fellow Meridanos. By this time, the Critic didn’t mind the bright airiness of the place and was delighted to see French Press coffee on the menu.

Indeed, the freshly pressed coffee is very tasty and served with tiny ceramic cups that are too cute. A bread basket was ordered and it contains what appears to be a scone, a pain au chocolat and a little muffin. Served with tiny bowls of butter and jam and all very good. The pain au chocolat is not flaky and light, but heavier, denser and delicious. Very buttery.

The kitchen is in plain view, the tables are close together European style and the overall impression is that this is a place worth re-visiting, to try some of the other breakfast offerings which range from homemade banana pancakes and oeufs any style to granola and more. Prices seem very reasonable and the air conditioning is perfect.

Final verdict for breakfast? Merci, hands down. The Critic will be back.