Perhaps someone out there can enlighten me?

I have been on the so-called convent route on several occasions now and have found, to my great disappointment, that the so called convent route, promoted in literature and online by everyone, is comprised of small, albeit mostly charming, towns – each one with an impressive and apparently restored church of some kind, and almost always … CLOSED.

Does anyone have a clue as to the operating hours of these places? I have looked at the first 5 sites that come up in a Google search and while most recommend leaving Merida in the morning, none mention that you probably won’t see anything beyond an outside wall at most of these places.

Thanks for your help!

Note: If you are under the impression, from the suggestive title “The Mystery of the Black Christ at Chumayel” that I am going to explain in definite terms why the altar in the church at Chumayel has a black Christ on it’s cross, then stop reading now, because I haven’t found the answers. If you have the answer or know of a good theory, let me know! 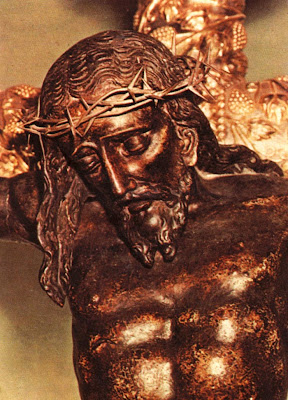 On a very recent (last week) visit to the church at Chumayel some friends remarked on the black Christ, finding it most unusual and so asked me about it. For those of you who haven’t seen it, it’s your typical representation of Jesus on the cross except the material seems to be black. While the fact that the Christ is black is unusual, what is certainly not unusual is that I don’t have a clue, being a lapsed catholic who has turned further and further from organized religion and so I was not able to answer their question on why the usually Nordic looking Jesus was in this case, black (without the facial features associated with the black race, of course)

After some poking around, superficially I admit on the internet, I have come to the preliminary conclusion that there is nothing tremendously scandalous or mysterious about the black Christ in Chumayel. Nor is it particularly unique, as there a few others literally hanging around.

For example, one of the more popular ‘Black Christs’ is on display in Guatemala in a village called Esquipulas. Beyond the usual back story on why a carved Christ is commissioned in the first place (humble villagers, miracles, rural area, etc.) the reason given for its blackness is the darker wood used combined with natural aging over the years.(1) The local arquitect Eduardo Andrade indicates that it’s color is due to years of being prayed to amidst candle smoke and soot.(4)

The Metropolitan Cathedral in Mexico City also features a black statue of Christ, known there also as Lord of Poison which is a pretty interesting name for a Christ figure. This is the most venerated statue in the entire cathedral and is located at the Altar of Forgiveness and apparently dates back to the 18th of August, 1602 when the Dominican Fathers came to Mexico with several Christ sculptures, all white.

Legend has it (2) that this particular figure was installed in a small chapel in Tlanepantla where the regent archbishop prayed daily and at the end of a prayer, would kiss the feet of this statue. When his enemies saw what his routine was, they applied poison to the feet of the statue in the hopes that they could off him in this way after his next prayer. Alas, their cunning plan was foiled when the statue (faith, people, faith) shrank back from the archbishops approaching lips, thereby saving his life and providing for yet another biblical story. The most interesting part of this tale – for the purposes of this article anyway – is that the statue then absorbed the poison that had been applied by the evildoers and this is what turned it black.

The story quickly got out and spread rapidly amongst the flock; the great back story and the fact that the chapel was not open to the public heightened the mystery and devotion to this black Christ. After being under wraps for many years (ie the marketing plan had worked and the product was ready) in 1935 the now heroic black Christ was moved from its private location to the Metropolitan Cathedral so as to be available for worship by all.

Apparently there is another black Christ in Veracruz, in the town of Otatitlan.(3) The investigator Carlos Navarrete proposes another theory; that these black Christs were made on purpose (as opposed to “Oops, it turned black we need a legend here, people”) and that they can be found on ancient trade routes established by the Pochtecas or prehispanic traders. In the work there is a mention of a substitution in Otatitlan, of a singular black Christ that replaced Yacaecutli or God of Commerce, who happened to be black also.

An article about Campeche mentions 3 black Christs; one in Merida, one in Calkini and one in the church of San Roman in Campeche itself (5), making the one in Chumayel another in a whole series of non-Nordic statues of Jesus.

And finally, beyond Mexico and Guatemala, there is another one of these statues in Portobelo, Panama. From the website: (6)

So there you have a brief look at the black Christ. Now the next time I am in Chumayel with out of town guests asking in hushed voices about the mysterious figure on the cross, I’ll be able to tell something reasonably intelligent.
————————-
1. http://peregrinacion.org.ar
2. http://www.elnuevoheraldo.com/articles/cristo-12171-negro-catedral.html
3. http://www.mexicodesconocido.com.mx/notas/1882-El-Cristo-Negro-de-Otatitl%E1n,-Veracruz
4. http://www.viajeaguatemala.com/Chiquimula/200411293719.htm
5. http://calkini.net/municipio/festividades3.htm
6. http://www.yourpanama.com/black-christ.html 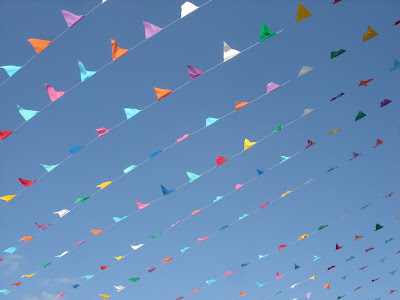 When traveling with friends and relatives around the Yucatan, I am often struck by the difference in ‘feel’ from town to Yucatecan town; Mani, while famous for its’ convent and history and of course the Tutul Xiu restaurant always gives me a neutral impression. Some people are very friendly, like the lady who embroiders dresses in front of the unfortunately closed-during-a-large-part-of-the-day convent; others are outright sullen and hostile. In Uayalceh, there are many suspicious looks and a kind of hardness in faces that is difficult to describe but perceptible.

Yesterdays excursion through the so-called ‘Convent Route’ had a similar result. The inhabitants of the tiny villages of Telchaquillo and Mama were indifferent and the towns themselves lackluster bordering on decrepit in spite of their attractions.

Tecoh was a different story altogether. Maybe it was because it was Sunday, everyone was dressed up, in church and feeling celebratory or maybe it was the impression you get from the moment you leave the highway and approach the town, noticing that there are trees and flowers planted along the way to welcome you. As what seemed to be the entire population of the town exited the church upon the conclusion of Sunday mass, Yours Truly and company got plenty of stares and a giggle or three from the kids but also many a Buenos Dias and a smile. Friendliness seemed to ooze from the pores of everyone we came into contact with.

Is the neurotic foreigner getting soft in his old age?