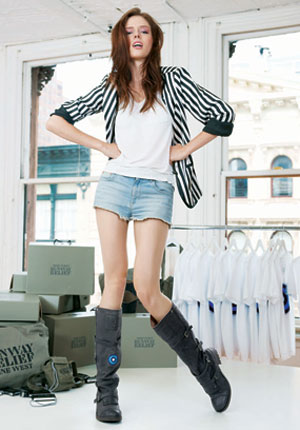 I apologize for the cheesy title but it was as creative as I could get for the subject on my mind this morning: Boots.

My Better Half, who stopped by Nine West the other day and observed that ‘everyone’ was trying on boots, says it is all about being fashionable in response to my comment that the boots seemed a little over the top considering that it is not particularly wet outside nor is there any snow on the ground that I have seen anyway.

Along with the boots come the sweaters, shawls and even fur (fake or real who can tell) tipped abrigos (coats) that make me sweat just looking at them. Sweat not because they are so sexy, but because they look too darn hot to be worn in Merida, let alone inside the mall.

I do enjoy the look of the boots though, even if it does seem superfluous. A form fitting pair of jeans and calf-high leather boots with heels will cause many to turn for a second glance and I admit I am not immune. My favorite combination seen this frigid winter season, has been a 20-something woman in a tshirt, sweater, knee-high boots and a pair of cutoff jeans. I don’t see this combo warding off cold temperatures any time soon, so I surmise that my Better Half’s observation is correct. It’s all about being in fashion.

I draw the line however, (and these I have seen as well this winter) at earmuffs.

Now that we are on the subject of July 4th (OK we aren’t/weren’t but isn’t this a nice segue) there is an article I read this morning regarding the term ‘American’ which was enlightening, especially in the definition of the term. I always thought that a citizen of the United States referring to him or herself as ‘American’ was really pretentious, since I believed that ‘Americas = continents’ theory, but I am almost ready to let it go.

From the article I read this morning:

How to tell whether or not you believe the term “American” really applies to you.

If you were to go to India and speak to someone who said she had family in America, would you truly respond “Oh really?  Where exactly.. in Chile?..  Guatemala?? … Peru perhaps?”