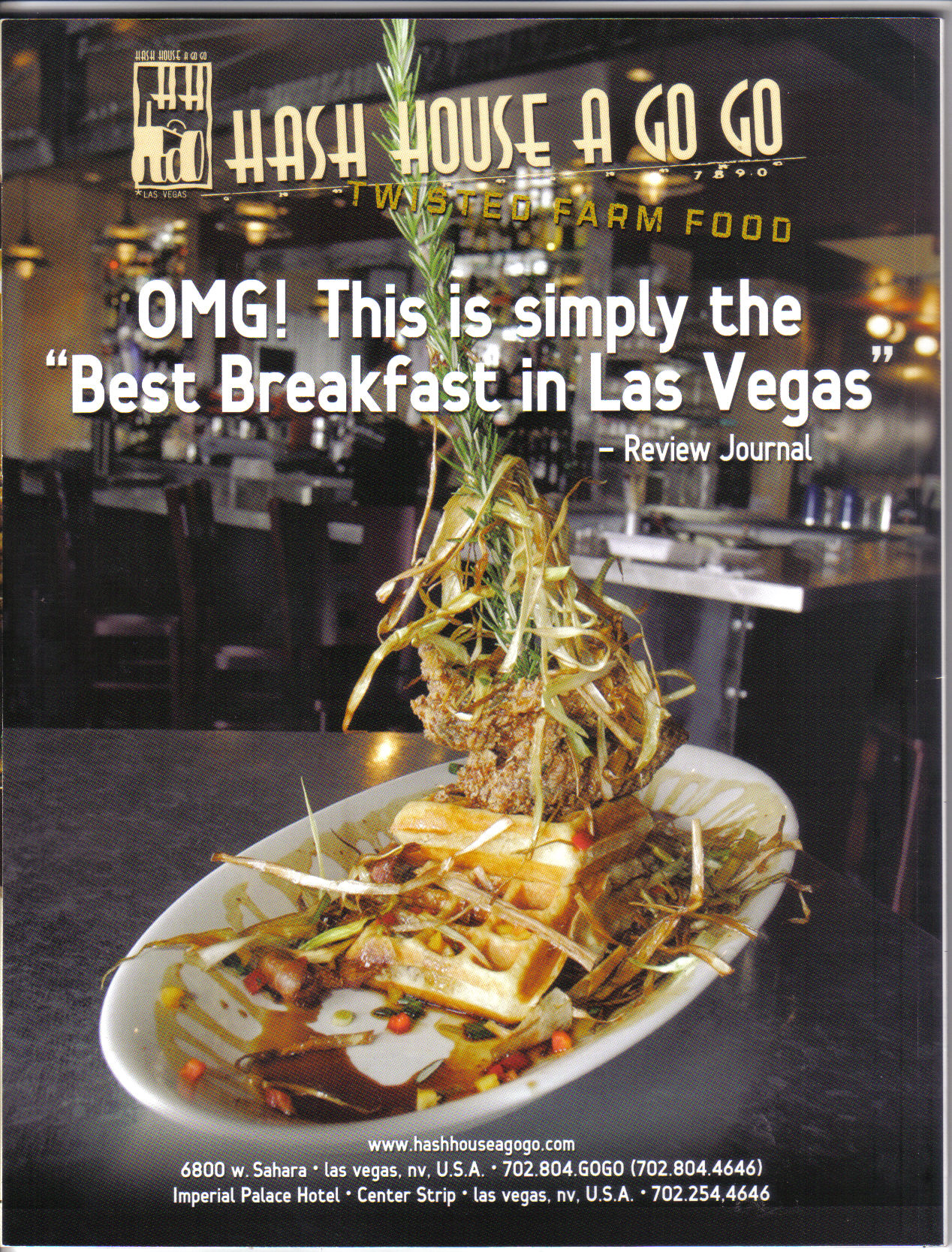 While looking around Las Vegas for an indy record store to find an elusive CD by Marina and the Diamonds, the Mini-Critics favorite group, the Critic was on the look-out for a Starbucks for a good, strong, morning coffee.

After driving for some time, it became evident that the street called Sahara in Las Vegas is not as chockablock with Starbucks as say, Granville in Vancouver and so the Critic began looking for anything resembling coffee (besides McDonald’s) when suddenly, coming up quickly on the right, a sign advertising breakfast – the Hash House a Go Go.

The ad above, scanned from the Dine Out magazine that purports to tell its readers which restaurants are Vegas’ best, essentially says it all. And that dish in the ad actually exists: waffles and fried chicken (honest) in a vertical tower and of such gigantic proportions, that you would never believe one person could finish the platter by themselves.

Of course they can, and they do.

The Critic did a little survey of the people coming in and a solid 70 percent of the almost all-white patrons (along with a few hefty Latinos) were little more than round, roly-poly chubmuffins, who waddled up to the hostess station, announced their names and patiently waited. There was a 20 minute wait for breakfast, and the Critic arrived at 11:00 AM! This 20 minute wait turned into a 10 minute wait for lunch; the action never stopped.

The food is gloriously delicious and completely over-the-top too much. Not generous, TOO much! The Critic ordered a hash consisting of crunchy fried potatoes which are combined with different fresh ingredients (there are 5-6 on the menu). In the Critics case, a mild, almost Italian sausage-like “chorizo”, peppers, onions, mushrooms and cheddar cheese to round out the cholesterol content. This came with a biscuit/bun and a healthy serving of scrambled eggs. It was impossible to even try the bread, let alone attack the eggs and some of that hash didn’t get tucked away either. The juice – apple – is fresh squeezed and a real treat, as is the coffee which is formidably strong and tastes absolutely delicious.

Service is fast and friendly in the typical American restaurant way (when things are going right) and so no complaints there.

At 20 dollars for enough food for a mid-size Gambian family, the Hash House is both satisfying and not a big hit on your pocketbook.

And the Critic never did find that Marina and the Diamonds CD.