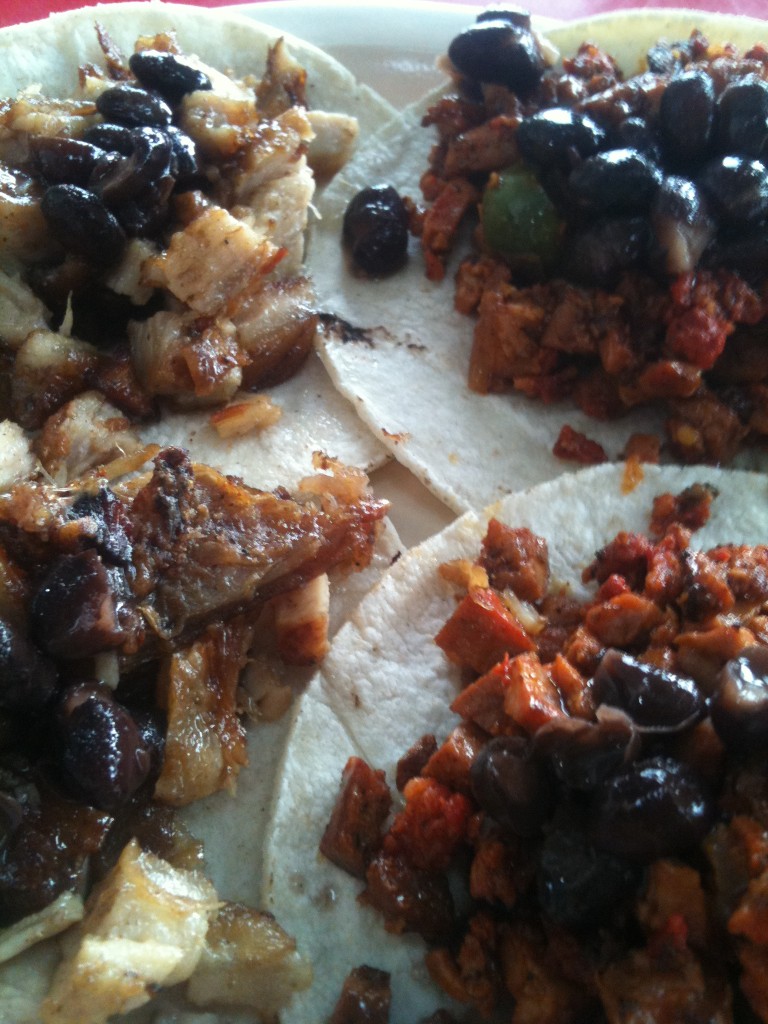 After so many years of living here and not going, Wayan’E has received more visits from the Casual Restaurant Critic than usual, probably because of his rather sparse pocketbook situation (dictionary sales are down this lifetime) and also because Better Half is always on a trip someplace exotic.

Read the previous review here; there is really nothing new to report except that the tacos are delicious, the service friendly as hell and the prices are fantastic.

I am hungry now what with that photo. I think I will go al ratito which does not mean “to the little rat” but rather “in a little while”.

Yesterday the Casual Restaurant Critic, along with the always lovely Better Half and two other guests of Yucatecan extraction were in sunny Ticul, the clay pot and shoe capital of the area. Ticul is also home to Los Almendros, the Yucatecan restaurant to go to back in the day.

The Critic was aghast at the decline of this once-great culinary destination. The restaurant itself looks pretty much the same, with plenty of religious paintings hanging on the walls, above aesthetically-challenged lamps with energy saving bulbs protruding from their petal-like openings and non-functioning mini-split air conditioner units. One must assume that the air conditioning is for a) really hot weather (hard to imagine it getting any hotter than April) or b) for when the restaurant is full, which might be never.

The courtyard in the back has been converted to a hotel and the lobby entrance is at one side of the restaurant. Evidence that the breakfast for the hotel is served here includes the buffet table, still strewn with coffee machines, cups, a few boxes of Zucaritas mini cereal boxes and some thermoses; this is at 4 in the afternoon. The Critic suspects this makes setting up the next mornings breakfast service so much easier; a quick rearranging of these items will greet guests when they wake up for their all-inclusive 60 peso breakfast.

Orange juice was refreshing and tasted fresh, the pitchers are filled from bags of orange juice stored in the fridge behind the bar. Guacamole, ordered by the afore-mentioned Yucatecans, was fresh enough and came with crunchy tostadas. Everyone ordered Poc Chuc and the pork was tasty, tender and there was lots of it on the plate. The big dissappointment was the Critics favorite, Queso Relleno which was nothing like a queso relleno eaten – and enjoyed – elsewhere. A bit of cheese covered meat, which looked like a pate, swimming in a large bowl-like plate filled with corn-starch kol which was strewn with bits of cheese, tomato sauce and turkey. What the hell the turkey was doing in there baffled the Critic who was unable to finish the unappealing dish as it just seemed like the kitchen had combined a bit of Queso Relleno with some Pavo en Relleno Blanco that was lying around.

Tortillas were fresh and decent enough and of the hand-made variety, although they weren’t nearly of the consistency, flavor or freshness of those served at the Principe Tutul Xiu in Mani. Usually Poc Chuc is served with a small bowl of Frijol Colado, which is cooked black beans, strained (not ground up in a blender) served like a soup on the side. The beans only came along after being asked for and to the Critic, tasted a little off, but everyone else seemed to think they were beyond excellent, so the Critic must have been negatively influenced by the horrendous queso relleno, which surely clouded his judgement.

Service was poor to average at best, what with the television blaring over the cash register area and providing entertainment for the staff from which it was necessary to tear them away to get any kind of service. Dirty dishes remained on the table for ever, and don’t even get the Critic started on the coffee.

The coffee! This was very possibly the worst “coffee” ever encountered by the Critic or his guests, anywhere in the Yucatan, ever. With a bouquet that was distinctly reminiscent of burnt tortillas, the hot, dark water in the cup tasted like the proverbial agua de calcetin (dirty sock water) and was literally undrinkable.

Lunch as described, for 4 persons with two pitchers of orange juice came to about 500 pesos and really, they should be paying the guests to eat here, not the other way around.

What a shame that this once-proud and fine Yucatecan bastion of good eating has degenerated to such absolute misery.