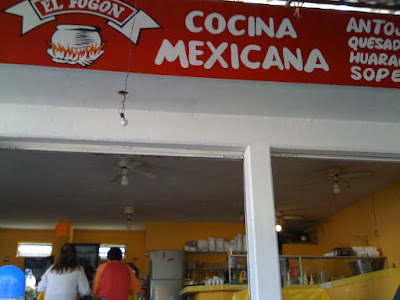 The other day, feeling hungry and definitely not in the mood for the usual WinFa/Trompos/BurgerKing lunch, the Casual Restaurant Critic sallied forth from the occasionally air conditioned Gran Plaza mall with his Better Half, strolled across the parking lot in the general direction of Starbucks and then veered off to the left to have lunch in the red-signed restaurant that proclaims, in an apparently Coca Cola sponsored, red-lettered sign: ‘Cocina Mexicana’. Next to that, a smaller logo with the words El Fogon.

For those readers unfamiliar with the term ‘antojitos‘ it means snacks or perhaps appetizers and is generally used to refer to food prepared in the wach style. If you don’t know what a wach is, you need to find the NotTheNews Living Dictionary (it’s online around here someplace or order a printed version at lulu.com) and look it up. Mexico City street cuisine is alive and well in Merida and there are several places where one can find typical food from the country’s capital. Jardin Balbuena is one of those places. This place – el Fogon – that the Critic is writing about today, is another.

The Better Half and the CRC ordered enough food to sink a canoe, which is what usually happens when one is starving and the menu looks appetizing! The following items were ordered, believe it or not:

There is enough cholesterol in the above order to keep an entire African village fed for a month, but the Critic and his BH managed to finish most of it. Everything was hot and for the most part, tasty. The pozole was a little on the watery side as if the Critic had arrived at the final pressing of a large pot of soup that had been re-watered for several days to make it last a little longer. The taste of the tostadas was smothered by the heavy cream that the waches like to pour on their sopes and antojitos, along with that crumbled goat cheese, but all in all the food was satisfying.

Service was familiar ie: family style. This means that a family member is taking orders from the table and really doesn’t have a clue, but was not unpleasant. The food came quickly and the table soon filled with plates and bowls. The outdoor setting on this November afternoon was cool, breezy and very comfortable. There was a view of the small street and the Gran Plaza parking lot. This would be a great place to sit and watch the Christmas madness unfold in December.

And the bill? All that food and a bottle of Coke came to a whopping 171 pesos, which at today’s exchange rates is about 15 US dollars. Quite a bargain, really.