Back from a much needed and barely affordable vacation that is.

Once again, the Critic was in Beautiful British Columbia (it must be so, it says so right on the license plate of every vehicle!) and had the opportunity to sample many restaurants great and not so great. Here are a few of the places tried on this visit. 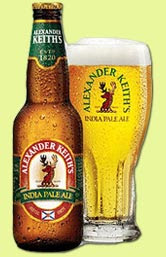 The Keg – As on a previous visit, the well known Vancouver institution The Keg (Thurlow, near Robson, downtown Vancouver) was visited and since this was covered in a previous visit, there is not much new to report other than the fact that the place is still as great as ever. If the Critic may make a beer recommendation, it would be Alexander Keith, a full bodied and slightly sweet – and not too gassy – ale.

Milestones – Another tried and true BC favorite, Milestones is known for their good food, large portions and friendly atmosphere. On this visit, the Critic and the two MiniCritics as well as the Better Half had breakfast there (English Bay, downtown Vancouver) on two occasions. While the Critic’s choice of prime beef hash with eggs on top was very satisfying, the better choice was made by the Critic’s Better Half; she chose the Eggs Benedict, with the Milestones twist of adding several good sized succulent shrimp and guacamole. 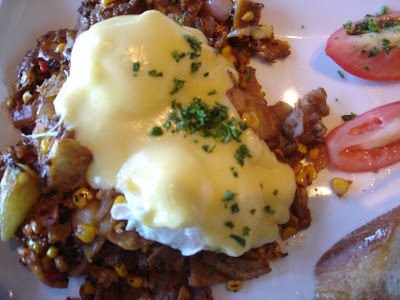 Milestone’s Prim Rib Hash (above) and Eggs Benny (below) 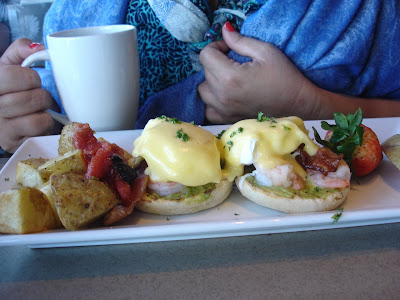 Water Street Cafe – also reviewed previously, this Gastown favorite (Gastown historical district, Vancouver) is as great as ever and the oyster appetizer, again, wipe-your-plate-with-the-bread good! The service seemed a little less attentive than on previous visits, leading the Critic to suggest that perhaps the restaurant had been sold, but the Critics observation was drowned out by the other members of the dining party, who thought the people doing the serving were in fact there on the last occasion.

Tsunami Sushi – Tsunami Sushi (Robson Street, downtown Vancouver) has been a Critic family favorite for about 20 years now. The big attraction is the fact that you can get a seat at the oval shaped bar, inside which the sushi chefs are hard at work and around which a small, water filled canal flows, at about eye level. As the sushi chefs prepare the different kinds of nigiri, rolls and other goodies, they place them on little colored plates on small wooden boats that go around in circles in front of you, so you can come in, sit down and begin eating immediately!

The service on this occasion left a lot to be desired, putting a severe strain on the Critics relationship with the restaurant. One piece of raw clam or conch tasted and smelled definitely past its prime and the waitress was informed, who stared blankly and not understanding what was being said. Another waitress and a possible host type person also came over, these two evidently with a better command of the English language but their reaction was of the ‘oh well’ variety. They were probably under the impression that this was another of those cases where the dumb western diner didn’t like the taste of the sushi he/she had selected and was trying to not pay for it. They of course had no idea that the Critic and Co have been coming here for about 20 years now and this was a definite case of fish being ‘off’. In any case there was not a gram (this is Canada and it’s metric) of empathy to be had and this put a damper on the rest of the meal which was thankfully near its’ end.

The Alchemist – Everytime the Critic has the occasion to visit this small, former logging town on the optimistically named Sunshine Coast, there is a new ‘good’ restaurant. The reputation seems to last as long as it takes for the Critic to return to this charming hamlet. Last time it was the Laughing Oyster. This visit, it’s The Alchemist (Marine Avenue, Westview, Powell River) where a real, live French chef works wonders in the kitchen.

Well the local gourmets are not exaggerating! The Critic is pleased to report that this is as good as anything in Vancouver or elsewhere, tucked away in an unassuming former house with a (somewhat limited and only on a clear day) view of the snow covered peaks of Vancouver Island across the water.

two main courses and a cheese plate for dessert!) 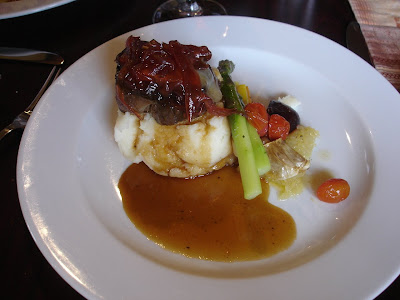 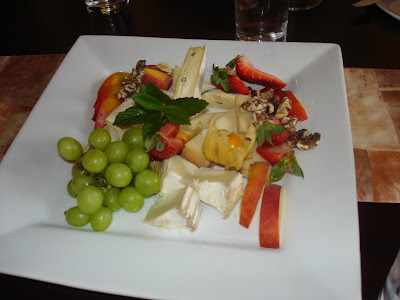 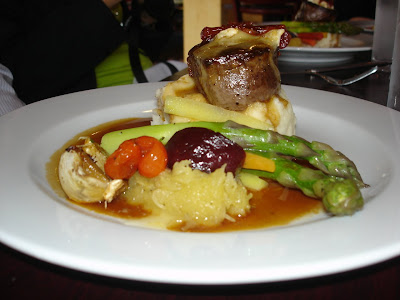 The Critic highly recommends this restaurant if you are in the unlikely position of both being a reader of this blog and in the Sunshine Coast area.

More Critic mini-reviews from this visit later! It’s late and my eyes aren’t what they used to be.

2 thoughts on “The Critic is Back!”