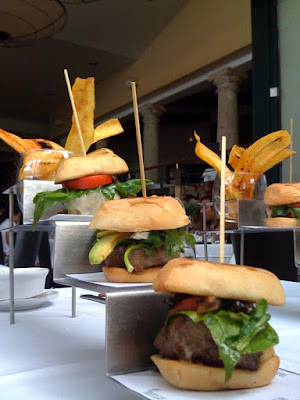 At this time of the year, Merida restaurants respond to the decline in attendance by offering promotions and specials, especially for those husbands or spouses that have to stay and work in Merida while the rest of the family vacations in and around Progreso. These husbands have no one at home to ‘serve’ them their lunch and so the restaurateurs of the formerly white city take it upon themselves to fill in for the duration.

One of these is Trotters, who have an excellently priced lunch special that runs around $150 pesos or so and includes a soup, refillable refresco, a main course and a dessert.

The Critic and his Better Half had the opportunity to sample this lunch the other day. The verdict? Take it or leave it.

The service was really rough at the beginning with an extended gap between the seating and the appearing of a menu and the offer of a drink. Drink refills were sporadic. Appetizer delivery was clueless; the busboy offered the appetizer to an adjacent table (where the diners were finishing their main courses), did not look around and headed back to the kitchen where the appetizer remained for quite some time.

Air conditioning was minimal, making it just a little uncomfortable with the humid heat Merida is suffering these days.

The soup, a cream of asparagus, was too obviously made with Carnation canned milk. The Mini Burger Trio however, was excellent. Juicy and tasty, each little burger had its own little theme going on.

The Critic can not really say that this is a Do Not Miss promotion. Take it or leave it.

4 thoughts on “The Trotters Burger Trio”