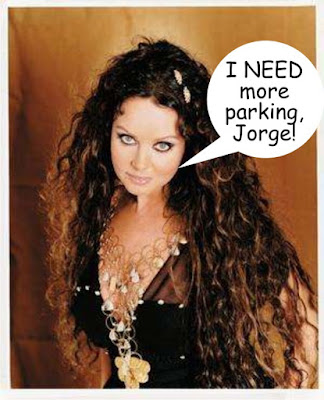 Yes, that’s Sara, no ‘h’, as the newspaper put it this morning.

Our hallowed Instituto of Cultura, captained merrily once again by Jorge Esma, a local politician we just can’t seem to get enough of, is presenting Sarah Brightman in concert, at the Chichen Itzá archeological site. Our friend Jorge was of course the guy who brought us Pavarotti and Domingo as well, thereby consolidating his position as artistic überpromoter and cultural go-to guy in the state. He has had some reasonably good ideas in the past but continuing to milk Chichen Itzá for profit seems to me a lousy one.

Call me a cynic but isn’t this promoting concerts and charging exorbitant amounts for tickets (up to $8000 pesos or $600 USD in the so-called VIP area) the job of private capitalism? Should we really be paying taxes (the few of us that actually pay them) to organize and pay for this kind of event under the thin guise of ‘promotion’ for the state’s touristic wonders? I don’t know about you, but I don’t want my tax pesos used to destroy more threatened Yucatecan fauna to make way for FOUR ADDITIONAL parking lots near Chichen Itzá. Or to DOUBLE the size of the ‘abandoned’ airport, which will mean paving over more jungle. See his interview in today’s Por Esto newspaper.

Why not call this the Sarah Brightman Screw Global Warming Tour?

Promotion? Give me a break.

Let’s face it: this event (and the upcoming concert with Elton John) will benefit Jorge and anyone on his good side involved in the planning and organization only. Promotion? Everyone in the world already knows where Chichen Itzá is!! And those that don’t, also don’t know or care about this Sarah Brightman person.

What are they promoting besides the lining of their own pockets? Nothing.

And how is it that neighboring Campeche state can bring in Il Divo, which must be charging an arm and a leg these days for a show, to celebrate their anniversary or whatever, and have the concert be completely FREE? Everyone makes fun of Campeche and their funny ways; boy are they ever stupid to offer a concert to everyone FREE when there is so much money to be made!

This sucks. I hope she gets laryngitis and has to cancel.

Before they cement over more jungle.