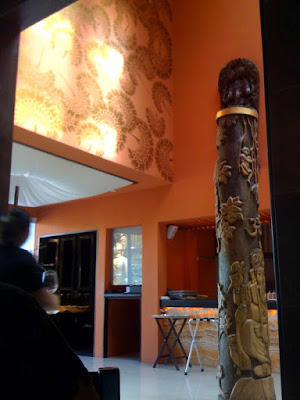 The Casual Restaurant Critic had been yearning for the opportunity to visit this imposing new restaurant on the Prolongación de Paseo de Montejo for some time. With it’s sleek, modern look, valet parking and a giant Buddha out front, it definitely looks promising!

So the Critic, Better Half and MiniCritic went for lunch last week. The restaurant is indeed beautiful: the decor, the finishes, the details are all absolutely fantastic. The personnel seemed a little casual and distracted but nevertheless, they were friendly enough upon arrival.

The Critic decided that a table in the regular section would be alright; opting not to sit in the Teppan Yaki show grill area.

From the menu, the appetizers:
Edamame – described as steamed Japanese peas. It should be noted that edamame is not a Japanese pea, but a soy bean. Oh well, no big deal.
Caesar Salad – a selection of different kinds of salad greens, with a Caesar dressing etc.
Scallops breaded with Parmesan Cheese

When the appetizers arrived, the Critic and Co. realized why they called the edamame ‘peas’. These were indeed peas, of the Chinese ‘snow pea’ variety. Not only were they not soy beans, they were not steamed either! Rather, they were stir fried with pork that tasted a lot like bacon! A vegetarian would have had a heart attack. Thinking there was a mixup, the Better Half asked the waitress if these were the edamame. She assured the table that they indeed were. The Caesar salad did not really have a selection of different greens and the scallops, while crispy did not have a hint of Parmesan cheese. They were served on a white sauce with some cooked greens which looked interesting enough but was nothing to write home about (or even on this blog about) in terms of taste. The MiniCritic asked the Critic what the sauce tasted like and the Critic replied “white”, which about sums it up.

For a main course, there was a Rib Eye for the Critic, a stuffed quail for the Better Half and a pasta for the MC. The pasta was fine, the stuffed quail featured a very tasty sour-y sauce but the Rib Eye was not a real Rib Eye, in the Critics’ Humble Opinion. It’s texture and taste was much more along the lines of a thick yet bland arrachera, in that rubbery, marinated, ham-tasting kind of way. Not good. And the accompanying Thai rice was… cold. Ugh.

Desserts were not had.

The Critic would not could not (in a box) recommend this restaurant in good faith, unless perhaps someone could put in a good word for their Teppan Yaki area or just to have drinks. The actual room, as mentioned above, is over-the-top beautiful, the service is just so-so and the food is really quite bad, considering the investment in the actual building. What are the investors thinking? Maybe it’s a money laundering operation; that would make sense. 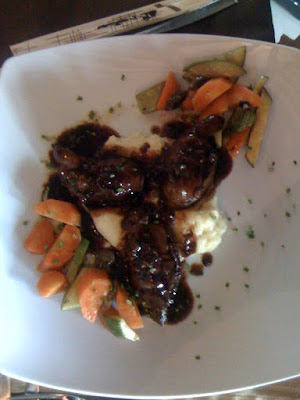 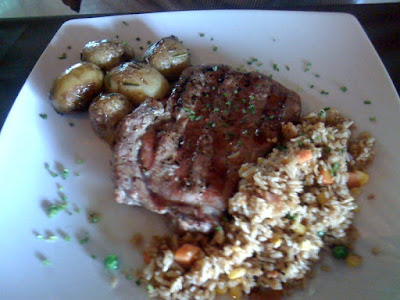 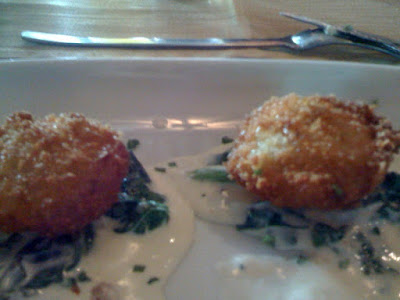