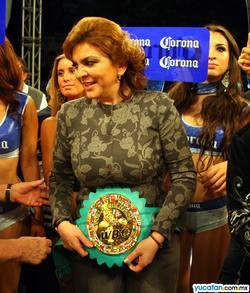 In case you haven’t heard about it, our Yucatan governor Ivonne Ortega Pacheco suffered a reality check last weekend when she appeared in the ring prior to a boxing match between Elio Rojas and Guty Espadas Jr. in our Kukulkan stadium; she was roundly whistled at and booed by the 8000 fans there. Visibly shaken she left the podium and the newspapers have had a field day.

It seems that all that posing for photos with telenovela stars, visiting dignitaries and the like have shed light on the fact that she is doing precious little in the way of actual governing. Complaints are mounting about money being given out left and right to party cronies and the latest scandal is that she is cutting federal funds destined for the municipality of Merida, thereby forcing the cancellation of projects which were counting on that money. So far, she has lived in her bubble, as Mexican politicians do, unaware of what is really happening in the world outside the official one.

I humbly suggest that she could make a huge impact – a positive one – by repealing the hated tenencia tax on vehicles, which was passed from the federal government to each of the states to charge if they wanted. The state of Queretaro has led the way by announcing the cancellation of the tax (a temporary tax created to raise funds for the 1967 Mexico City Olympics), and if Ivonne were to do the same in Yucatan, she would gain a huge amount of goodwill and recoup some of the popularity she enjoyed when she was first elected.

What do you think? Could this work?

4 thoughts on “How to Boost our Governors Sagging Popularity”