A recent visit to Vancouver by the curmudgeonly Casual Restaurant Critic featured a lot of restaurant visits, as is to be expected in a city as restaurant-filled as Vancouver. It is truly amazing how many places to eat there are – does no one eat at home? There are of course a lot of Asians in Vancouver and it is only fitting that there be a huge amount of Asian restaurants; everything from Cantonese to Vietnamese to Thai to Northern Thai to Japanese to Malaysian to…

Here are a just a few of the Critic’s notes: 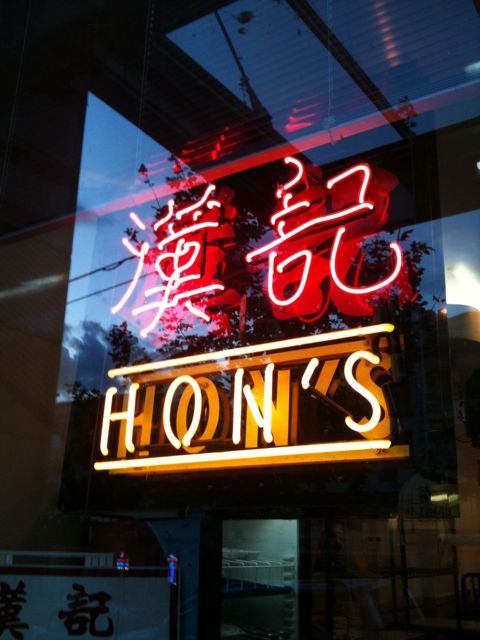 Located smack dab in the middle of Robson Street, on the West End side, Hon’s has been airlifted out of Chinatown and dropped on the most expensive piece of Vancouver real estate. The Critic went here for lunch and had a plate of BBQ duck, along with some rice and a Alexander Keiths Pale Ale. A great meal for 15 Canadian dollars. Be aware that the duck has been brutally hacked with one of those Chinese cleavers and there are bone fragments throughout. Also, the duck could have been a little hotter. But the flavour (Canadian spelling) was fantastic, the rice was hot and sticky (like a Merida afternoon in late August) and the beer cold. All plates and cups and glasses are made of that plastic material typical of picnic dinnerware. 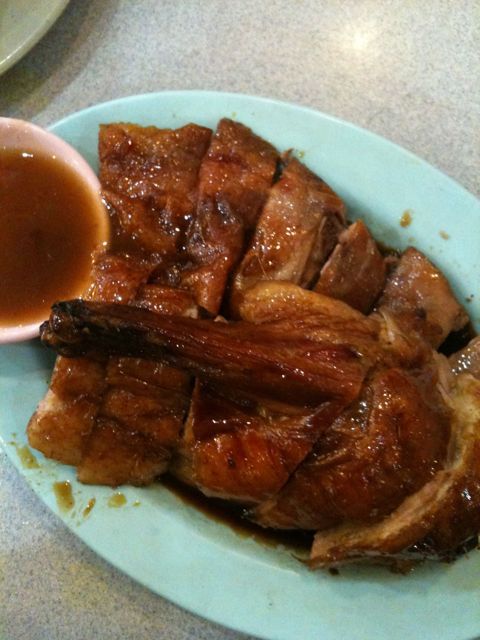 Also on Robson Street, just down from Hon’s towards trendy Denman Street, is the Capers/WholeFoods market, a mecca for anyone wanting organic and free range and whole grain and gluten free. You know who you are. A great place to stop for dessert or a fresh peach when they are in season. At their bakery on this visit, they had the most scrumptious fresh cherry pie ever. To Die For. Check out their website and if you go, take a bag because that’s the green thing to do.

Almost across from Capers Market, on Robson Street, is Sushi Mart which looks interesting from the outside because of the reviews posted in the windows and the one giant table inside. It seats about 14 people and is a kind of communal sushi experience. The fish is fresh, the rice perfect and the service fast. The Critic thinks that to survive in the Vancouver sushi restaurant competition, you have to have something that will make you last, besides fresh fish. This place is just fine for a quick lunch. The Critic had a lunch special which was a large bowl of sushi rice on top of which were about 6 different types of fish sashimi aka Chirashi Bowl. Great stuff and not at all expensive or pretentious. The Critic would like some of that sashimi right now.

Finally getting away from the Robson Street/West End area, the Critic had a fantastic early dinner (early by Yucatecan standards anyway) at one of the few southern (US) style barbeque places in Vancouver, on Commercial Drive in East Vancouver. Nestled among the funky shops, the Pakistani-run groceries, the Portuguese Social Club, Italian cafes and trendy bars is this restaurant (warning – website has sound) which on the day the Critic appeared at the door, was featuring an All You Can Eat special on ribs and fries for about 20 dollars. B

eers were ordered and the Critic and his Funkified Guests chowed down on enormous ribs with extra bbq sauce all tangy and delicious and cripsy fries, washed down with cool cervezas. Not cheap, but good. Lunch for three as mentioned came to a whopping 90 dollars Canadian which is definitely not the cheapest meal one can have in Vancouver but that one meal lasted the Critic at least 24 hours.

Every town has it’s hipster hangouts; run down diners that appeal to the cheap, the frugal, the hip and the trendy. Bon’s, on Nanaimo Street and Broadway in East Vancouver, is such a place. There is a lineup for their 2.99 breakfast special, a price that is unheard of in Vancouver.

And it is a filling breakfast too, not some pansy-ass continental menu that passes as breakfast at so many places. And it’;s available all day, too. There is bread; 3 kinds to choose from and you get two slices, 2 eggs any way you want ’em, sausage ham or bacon and a big smackdown of breakfast potatoes that you will not finish. Coffee is extra and you may have to get up and serve yourself, it’s that busy. Same thing if you want water. Take a seat, look around at the crowd around you and enjoy. It’s the place to be, whatever time of the day that might happen to be. Check out the write-up on Urban Spoon. Photos too.

A newer sushi place, on Kingsway in sunny Burnaby is Nao Sushi. Like the Critic mentioned before, the sushi competition is fierce and there was not really anything about this place that stood out. Service was only average, not slow or unfriendly, but not OMG what great service either. And the sushi was very good, but not OMG this is SO good good. Some of the rolls actually fell apart as one picked them up with the chopsticks, something that the Critic had never experienced before. Is this a good thing or a bad thing as far as sushi goes? No idea.

The Critic suspects that it is not a good thing. It was cheaper than some of the downtown options; lunch for two came to about 27 dollars and the Critic and his Italian Cohort had quite a bit of sushi. Notice also the crudely written ‘specials’ notices haphazardly taped to the wall. Why spend all that money decorating the place and creating some sort of ambience and then plastering the mauve walls with signs that obviously were hand-lettered by a 5 year old? And the TV with the news and a toilet bowl cleanser commercial don’t help either. Don’t bother with this one, there are so many more options for sushi in Vancouver! It might be Nao but it won’t be Then.

The Critic is sure there are more reviews, but it is late and time for some rest. Thanks for reading this far and hopefully this will help on your next visit to Vancouver, providing you were not planning to fly Mexicana, which is another story in and of itself which may get a write-up soon. Stay tuned!