Not every day can be an update on the coronavirus, since we are stuck at home and the only thing that is updated is on CNN, BBC, CBC, and AlJazeera.

Back in the carefree days before I became such a curmudgeon, I was in a high school production of My Fair Lady. One of my castmates who, for the purpose of this article I shall call “Susan”, and who brilliantly played Eliza to my Schwarzenegger-esque Dr. Dolittle back in the day, has asked why I light a fire in the mornings – what’s that all about since it is certainly not for keeping warm? A valid question and one I will try to explain.

Once upon a time some years ago, I was at a vivero, which is a nursery where plants are sold. The kind of place you go to when you want something to stick in the ground around your house, like arecas or flowers that will eventually dry up and die but what the hell they look nice for a while so you buy them.

Too pessimistic, the dead flowers?

Among the all the pretty plants arranged in orderly rows which always appeals to my Teutonic instincts, they had on display some clay pots and in tucked in amongst those, was a chimenea. A chimenea (chimney,  for the monolingual among us) is a clay pot with a hole in the front, and a chimney spout on the top. The idea is that you toss in wood or burnable things in the front, enjoy the fire, and the smoke comes out of the top. It’s for the outdoors, so mostly aesthetic but it can serve as a warming element in colder climates, I would imagine. Anyway, the thought of having one of these intrigued me so I bought it and took it home, which was fun as it took up the entire back seat of my car and sloshed back and forth at each traffic stop.

Jeez I hate it when I am uploading a photo of a chimenea and WordPress comes back with http error. I do not have the energy or desire to investigate further so I guess people will have to do a Google image search themselves. Or click here. It’s the one that is described as chimenea rustica.

Once set up, and some branches for firewood procured, I began to enjoy the ritual of preparing a fire in the mornings – when it is relatively cool here – and this was especially handy in 2002, when a hurricane – Wilma I believe – hit the Yucatan and there was a lot of material (fallen trees, branches, piles of dead bougainvillea) to be burned in that chimenea. So much in fact, that all the heat generated ended up cracking the clay and eventually, the pot succumbed under its own weight.

I missed my morning fire. Drinking my coffee on the back terrace watching the woodpeckers, the parakeets and the grackles was just not the same without those flames and the smell of wood smoke. A look around our yard yielded an unoccupied shallow clay pot (a base really, for a larger one) and I set it up on some stones in the place where the chimenea had once stood. This lasted for a while and then disintegrated as well. A conscientious search through several Merida viveros resulted in zero hits for a new chimenea. It was time to go to Ticul.

I guess now I am going to have to explain Ticul here, people are not going to understand the significance. This is going off on a tangent.

Ticul, a small town about 90 minutes from Merida, is famous for its shoes and its pottery. It is also the original home of Los Almendros, once Yucatan’s premiere Yucatecan food restaurant. There is good clay in the region and a dozen or more crafty-minded people make clay planting pots both large and small. They also make garden ornaments like clay pink flamingos and clay fluorescent green frogs (dubious tastes abound) which are sold in small locales along the street. The shoes, incidentally, are locally made and while they are not Jimmy Choo, they are cheap. And that is a good a reason as any to buy them, apparently. As for Los Almendros? They sat on their restaurant laurels for way too long and were overtaken by other, far better Yucatecan food options like Kinich, Teya, La Tradicion and even Chaya Maya and MUGY.

Why am I writing about restaurants? This is not the Casual Restaurant Critics column; he is always butting in and trying to get attention.

Along with the manufacture en masse of planting pots and colorful kitschy clay creatures, there are a few high-minded individuals who dedicate their time and energy to the fabrication of Mayan archeological replicas, ranging from small pots and whistles to enormous Chaac (Mayan rain god aka Tlaloc in central Mexico) faces and detailed calendars. These are sold to hotels, boutiques, and serious collectors.

I am really rambling here, have to rein it in. Rain it in. Reign it in. No, rein is right. Right as rein. The mind wanders.

I ended up ordering a chimenea from one of the former (manufacturers of clay pots) paid my deposit and left. Some time later, more than a few months since I had forgotten about it, I went back and although I was sure they would have long ago sold my piece and kept the deposit, there it was. The owner remembered me, remembered the chimenea, even had a copy of the deposit receipt.  Again, a gigantic sculpted pot rolled back and forth on the back seat of my car, on the drive back to Merida.

Es cierto! Este viaje lo hice con Mus. Que mala memoria tengo. It was the day we went to Uxmal and ended up on a hilltop in Ticul, having some great Yucatecan food and enjoying an amazing view.

Being of a rather delicate clay, this pot lasted less than a year before cracks appeared and it also fell upon itself one morning when I was stuffing in a particularly stubborn piece of firewood.

Getting to the end now, I can almost feel it.

Finally, I broke down and had some albañiles (bricklayers, construction workers) come and build me an actual fire pit with blocks and cement which I now enjoy on a daily basis. This is what you can see sometimes in photos posted on social media. 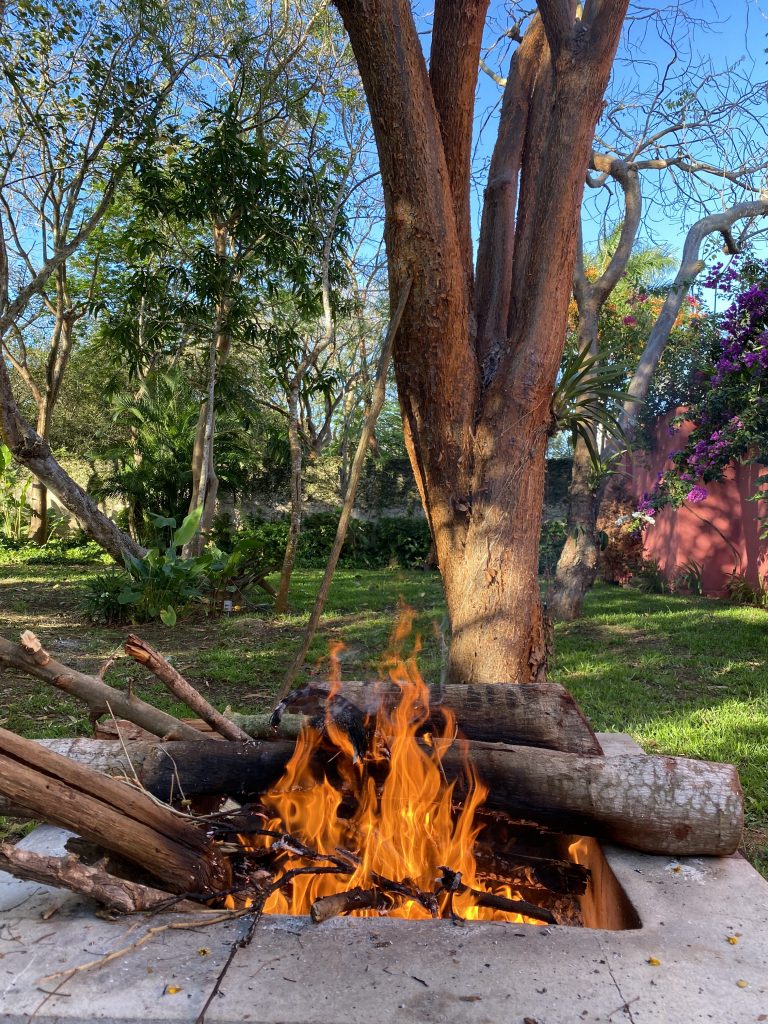 Lighting and enjoying the fire has become an inescapable pleasure of my morning, a moment to sit with my Better Half, enjoy our fresh coffee and watch the birds in the backyard.