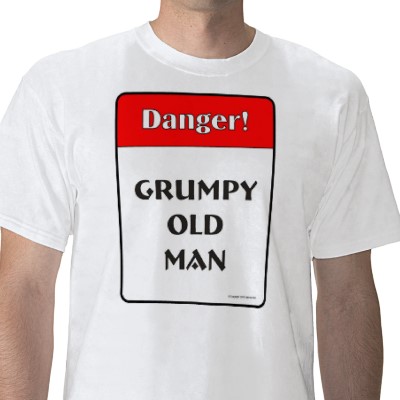 While this particular blog entry has absolutely nothing to do with Life in Merida from the Neurotic Foregners POV, the aging process is, nevertheless, a universal topic among members of my social circle and one with which I becoming increasingly familiar.

I look forward to becoming technologically impaired; that decisive moment when I decide that whatever technology is ‘new’ and therefore incomprehensible to me and just dismiss it as ‘stupid’ is a moment that will inevitably come, especially given the grade of neurosis I already posess. The new ‘FaceBook’ of the future will seem to me to be an invasion of privacy and just ridiculous and I won’t be able to figure out what the hell it’s good for, if anything. I will refuse to engage in conversation with my offspring, who will attempt to convince me of the benefits of adopting the new technology, that I have nothing to fear, that it is a good way to see what the grandchildren are up to. My derision will be accompanied by much shaking of my grey-haired head and moving my right hand from an over the shoulder and near my right ear position to a below the waist position (with an open palm, facing downward). These two actions will be taken while walking away from the person I am supposedly having a conversation with.

I look forward to not comprehending the significance of the future version of the CC button on the future equivalent of emails. I will complain therefore, in my self-pitying way, that it is craaaazy that people cannot communicate with each other normally and that I don’t understand if I just sent an email to one person that all the others didn’t get the message. I will not see that adding another email address in the future equivalent of the “TO” field on an email is not really that difficult and that I don’t have to go out in the winter cold, chop down a tree, put up a satellite dish and install another computer to send several emails at once.

I also look forward to forgetting how to spell my offsprings or their significant others names. To me, it’s all the same and I won’t understand the fuss and how could that tiny triviality possibly be any indicator of the depth of my feelings for that person or the significant other in question. Why are they all so grumpy, I will ask myself.

I anticipate (and this is already happening) abhorring (is it one R or two?) social engagements where loud music and loud conversation at too-large tables result in me staring abjectly at the people across the table, with whom I am unable to communicate beyond the occasional raised eyebrow and shoulder movements resembling dejected shrugs. The volume will put me in a foul mood that only a hasty exit to a more quiet environment can remedy, thereby forfeiting my right, should I be in Merida, to the lukewarm catered meal served at midnight as a strategy to keep us old folks hostage beyond the time we would normally tolerate the assault on our nervous system.

I will cope with and accept the increasing limits that aging puts on my body, from the newly discovered impossibility of climbing on the roof to enter my home when I have forgotten the house key, to the pain in my finger joints when I try writing as a method of communication as opposed to a keyboard (which funnily enough produces no such irritation).

There are many more things I look forward to as I reach the ripe old age of a half-century, and many of those will be positive I am sure. But this morning, I felt compelled to write about some of the less-than-stellar moments that I can look forward to (and I haven’t even touched on the GI tract).