The other week, I felt strangely compelled to join other palefaces living in the formerly white city to an event organized by the Merida Verde people to officially launch the second edition of the Living In Merida book, now new and improved and chock full of information for new, English speaking arrivals, with the occasional tidbit that might be useful for those of us who have lived here longer than most and have our own personal favorite suppliers of everything from accurate law advice to honest real estate brokerage services to where to get a transmission repaired without losing an arm and a leg in the process.

To project an air of respectability I put on a clean shirt, picked up always charming Better Half and headed out to that hotel with the Pinedo Covalin boutique located on the corner of 47 and Montejo, right where Montejo ends and what some locals call El Remate which of course is a misnomer as it is not a remate as such, but a principio or beginning of that famous avenue modeled after Paris’ Champs D’Elysees.

There were all manner of expats milling about, some of which sported faces completely new to me, as I am somewhat out of touch with this crowd, who for the most part inhabit that part of Merida they charmingly call  ‘Centro’ and are not frequent visitors to the other end of Montejo, where the Fridays, Sams Club and McDonalds along with the mall and its adjacent Starbucks make for a very different, and oft-criticized by visitors, impression of Merida.

“I prefer the REAL Merida!” they will say, wrinkling their nose, as if everyone should be wearing white outfits and balancing trays of glasses and bottles on their heads while dancing a typical jarana, panucho in hand. God forbid the locals should aspire to eating a hamburger or having a double grande latte with non-fat soy milk.

As I made the rounds, I overheard – and occasionally engaged in – earnest, well-meaning conversations on organic gardening, saving yet another local dog, the latest restoration of yet another fabulous little colonial down on 66 and all the Art that everyone seems to be making. These subjects are somewhat foreign to me, having been here now for so long with my regular boring job, normal family obligations and other mundane, boring activities that leave me precious little time for this navel-gazing that seem to be so popular among those who have moved here from el norte, to relish the freedom that a bank account in dollars can provide in a land of pesos.

Inside, the wine flowed freely (hey it was free, aprovecha!) and as some of the dialogue began to get a little slurred, I tried to identify, without much success, some of the people who I might have engaged with only online, before moving outside for some fresh air and a smoke. This nasty activity is of course now banned anywhere indoors in Merida, to the delight of many and the disgust of many more who can’t understand why Merida needs to adopt these new regulations when there are so many other things to be improved upon.

Once the book was presented and the thank-you’s made to all the collaborators in a drawn out affair which proved that not only Yucatecans will continue their conversations while someone is making a speech, the little soiree was over. A little more socializing with a few good friends I found there and I called it a night.

And the book? I’m sure it will prove to be a valuable addition to the information already out there, particularly on websites such as yucatanliving and yucatantoday and of course lawsonsyucatan, but one must take it all with a grain of salt. For example, the section on buying a used car mentions that one place to buy a previously owned vehicle is the ex-Penitentiary, which, as any local will tell you, is rife with stolen automobiles, cars with ‘papers’ issues and the occasional con artist.

It was a strangely different sort of evening, a take on a Yucatecan night out minus the Yucatecans, featuring a fantastic selection of characters out of some travel novel from the last century; something by Somerset Maugham. And although at the time I was a little less than enthusiastic about going, I am glad I went.

Reading Claudette Elizondos account on FaceBook of how her backyard was invaded recently by a host of locusts, known locally as langostas, I was reminded of the time I came home with my daughters and, after parking in the garage, unlocking the door and walking into the kitchen, daughter 1 casually announced “Hey Dad, there’s a spider on your back”.

“So swipe it off” I reply, equally casual, making a swiping movement in the air to demonstrate the technique.

“It’s a big spider” replies my observant and not-to-be-ruffled daughter, who evidently has ice in her veins. “I don’t want to touch it” she adds. Daughter 2 looks on in disgust.

Now I am starting to wonder what the hell is crawling around on my back.

I take a spatula from that ceramic pot where we keep our utensils. “Here, use this” I say, handing it to her. She looks hesitant and I raise my voice. “Knock the spider off my back, OK?”

She takes a moment and then, in one swing, manages to dislodge what I can now see is a rather huge tarantula that lands on the kitchen floor with what I am sure is a thud, although it could have been my imagination firing away upon registering the size of the black hairy beast.

Without much ado, and thankful that here in Merida we don’t have that North American habit of removing our shoes upon entering our house, I quickly stomp on it and the spiders life comes to an abrupt, squishy end.

I thank her and go off in search of a broom. 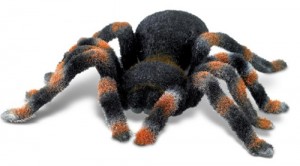