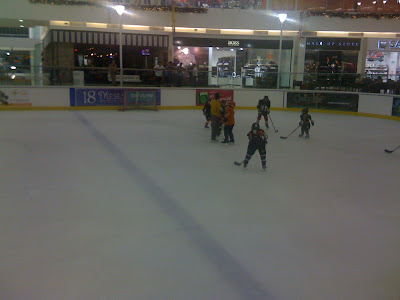 Most of you already know that Merida, the formerly white city, now boasts among its many attractions, an ice rink where public skating is offered to those Yucatecans (and people who have that aspecto fuereño thing going on) brave enough to overcome their reluctance to rent skates that were worn by who knows who and take to the ice.

Located in the Galerias Liverpool mall, the ice rink is also used for – get this – hockey practice! Being a Canadian, it was certainly strange to observe a group of kids ranging from 6 to about 14 years old decked out in full hockey regalia, shooting frozen pucks around the rink while shoppers and passersby watched with interest and amusement.

What I thought was interesting was that when the practices were over and a little scrimmage or mini game was played, it became evident that the referees (teenage kids) did not have a whistle! I can’t envision any kind of hockey practice without the shrill sound of a referees whistle, and it did seem to make it harder for the referees to get their point across during the practice.

But the overall impression was of how small the world has become, when you can buy salsas El Yucateco in any grocery store in Canada and play (or watch) ice hockey in Merida.

6 thoughts on “Ice Hockey… in Merida”