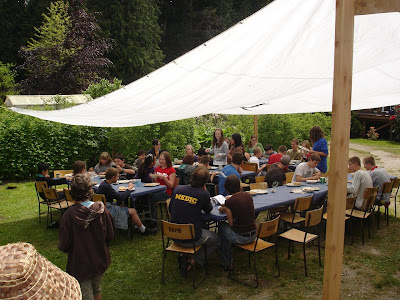 Can you spot the Caffeinated Kid?

In the previous post, I mentioned the camp and the rules imposed upon its’ operation by the fact that it was a School District run event and therefore had to comply with several sanitation requirements.

This camp, which was run by counsellors and Grade 12 students for Grade 7 age students, featured tents and campfires and all those things that make camp fun. Such as marshmallow roasts at night.

My strict kitchen boss had included in her list of camp food a case of marshmallows for evening around-the-fire roasting and on the first night, issued 2 bags to the camps’ organizers for the evenings’ activities.

The next morning, one of the counselors came to the kitchen trailer where we were hard at work with hash browns, off-the-grill toast, oven sausages and scrambled eggs for 40, to return the two bags of marshmallows from the previous night. With an apologetic shrug, he announced that one of his senior counselors had decided that there were ‘safety issues’ with the idea of people sticking marshmallow mounted on sticks into a fire and perhaps ‘waving them around’ (his words).

My boss and I looked at each other incredulously and tried really really hard not to burst out laughing in this poor students’ face.

Also on that morning, a couple (as in 3) kids asked for coffee with their breakfasts. The pot was right there at the beginning of the assembly line breakfast service.

The first kid asked for some and I replied, joking “No, this is just for adults”.

As he started to walk away, disappointed, I said in my best attempt at morning cheer, “KIDDING! We LOVE to have our kids caffeinated!” and served him a mug, adding that the addition of plenty of sugar would give him a nice early morning buzz and keep him wide awake through the mornings’ moss and lichens lecture.

A few moments later, a counselor who shall remain nameless except for his unofficial nickname of Lampshade, informed me that some of the kids were drinking coffee. He said this with the seriousness of an airport immigration officer who tells you “Come with me”

“Yes” I answered, “some kids asked for coffee and I served them a cup”

I thought of babies drinking Coke from baby bottles in Merida, the complete opposite extreme to be sure, and quietly finished serving breakfast.