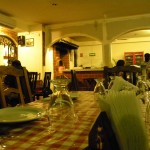 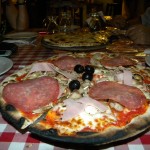 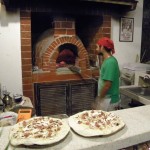 The Casual Restaurant Critic had driven by the restaurant called Pimienta, located just a few blocks beyond the Consulado de los Estados Unidos de America, when heading south-north, just before the street opens up to reveal the estadio Salvador Alvarado on the left.  The Critic had also heard some rumors and whispers that this little restaurant was actually pretty good.

So, upon hearing that dear friends were going to visit and were requesting the dubious pleasure of the Critics company, he dusted off his dancing shoes and took the Better Half along with Miss Tenerife and joined aforementioned DearFriends for dinner.

And what a surprise! Pimienta, whose owner was on hand to welcome the group, is indeed a little gem of a restaurant with great food, an elegant room and a waiter with a personality.

As far as food goes, there was pasta had by all. From green linguine buried in a delicious red sauce that the BetterHalf raved about the next day to the scallops in the Fruti di Mare pasta had (for the first time ever) by Miss Tenerife to the Mona Lisa had by the Critic to the pasta with shrimp and an appetizing chunk of meat whose names escape the Critic as usual; all were delicous!

Desserts were had as well, although there was absolutely no need to subject the groups digestive system to such abuse; a homemade Tiramisu, a light, just right lemon mousse and a dark chocolate pyramid.

Service was friendly and for the most part right there when needed (ocasionally he could have been a little more attentive) with the only quibble being that the he could have ironed his shirt to be more in keeping with the rest of the dining room which was impeccable.

All in all a pleasant surprise. Recommended!