Le Saint Bonnet is arguable the nicest looking restaurant along Progresos rather ragged malecon, which is why the Casual Critic suggested this as a lunch stop today for some out of town folks who wanted some seafood.

The tablecloths are white, but the fact that there are red stains indicates that these are not changed between diners.

The Critic and his guests had – at the waiters suggestion – one of the restaurants specialities: the shrimp stuffed with crab, served with a combination of a creamy white and what appeared to be cocktail or barbecue sauce (red). When asked how many shrimp the dish had, the waiter replied that it had 4, but that it was well served and ‘si te llena‘. 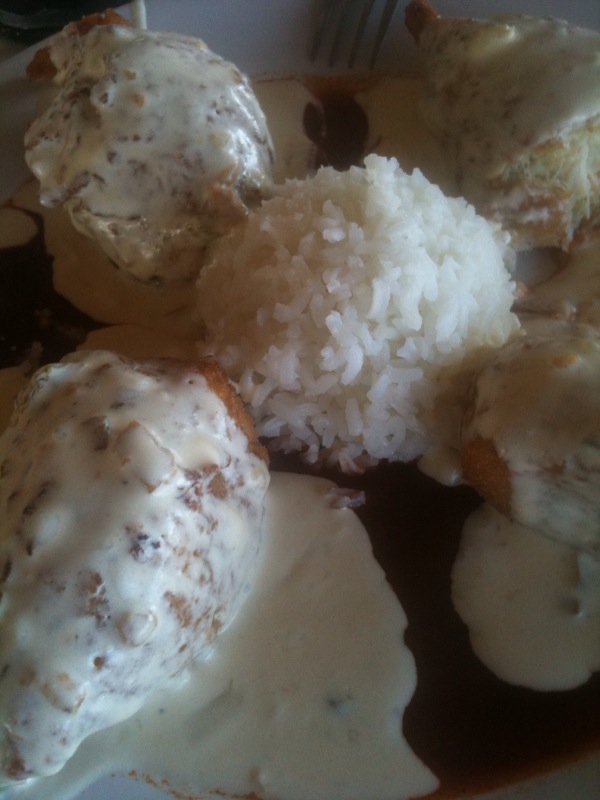 And llenarnos it did. Those four shrimp, with the crab and the creamy sauce and an upside down bowlful of white rice in the center of the plate was too much to finish, and only the voracious 16 year old at the table managed to do so. The Critic wasn’t too enamored of the dish itself though; after the first shrimp it became empalagoso, which is a term that is hard to describe in English but it could be defined as when your taste buds become over-saturated with whatever it is you are eating – usually it’s used in reference to something sweet. Shrimp 3 and 4 were decidedly less exotic than shrimp 1 and 2.

There was no room for dessert. With 3 Cokes, the bill came to $465 pesos, before tip.