Local 3 is an ambitious new restaurant, run by the people from COVI, who sell a great assortment of wines and liquors and who are a go-to source when looking for something beyond the scope of the wine selection at Sam’s Club and Costco; and Culinaria, the new cooking school here in sunny Merida.

The Critic and group of friends went the other night based on a recommendation by the Critics BetterHalf, who had had lunch there and raved about the delicious offerings, and the food, to be sure, was impressive. There was a salmon ceviche, served in little cubes piled in a cylinder and doused with what seemed to be a light cream or yogurt. Not sure if that is a ceviche purists dream, but it was good and innovative in its presentation. The tuna tartar was served the same way and the flavor of the tuna was excellent and hard to stop eating once the Critic had a taste. Last on the list of appetizers was an octopus carpaccio style, thinly sliced and lightly seasoned with lime. Refreshing but just a tad sparse for sharing among 6 persons, even with the other two appies on the table. 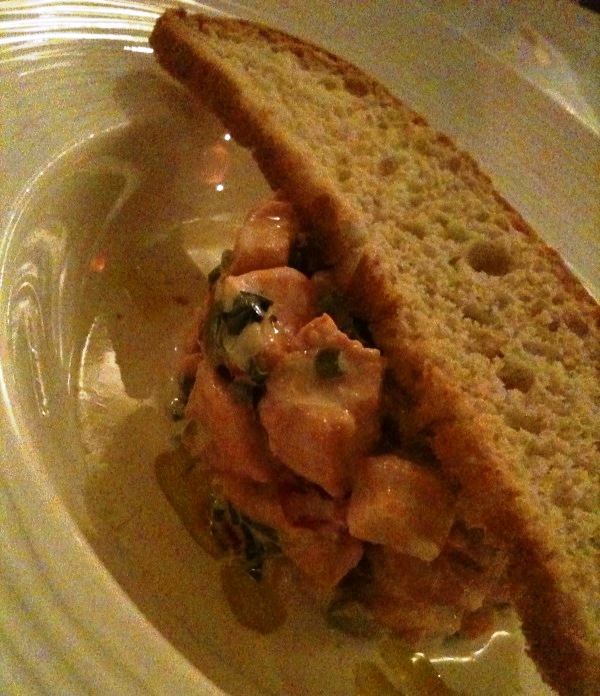 Bread, in the form of croissant-like rolls and bread sticks, brought earlier to the table was homemade and served with a creamed butter, also quite good.

For the main course, there was an arrachera steak, which was apparently very good as it disappeared before the Critic could finagle a bite to try. There was a goat cheese foccacia also, which, although advertised as warm, unfortunately arrived quite cold (¡está helado!) as the Yucatecan who ordered it, put it) and was sent back. It returned warm, perhaps heated in a microwave judging from the inconsistent temperature throughout. The Critic sampled the Sea Bass, one of the day’s specials which was excellent; as was a strange concoction of seafood served in a small casserole dish and baked with choclo, a kind of creamed corn mixture which rendered the dish a little sweet but served as an interesting counterpoint to the savory seafood – shrimp and scallops – within.

There was no room for desserts.

The big problem on this occasion was the fact that the main dishes took over 45 minutes to arrive at the table, from when the appetizers were finished. This is a huge time lapse and by the time the dishes did make it to the table, the stomach was sending messages to the brain that with the appetizers and bread already ingested, it was full, thank you very much. Apparently, this delay was due to the fact that there was some filming or photography going on and dishes were being prepared for the shoot. Not a good plan, unless the other diners were informed of this and offered a round of drinks or some other form of compensation in exchange for being ‘extras’ in their promotional piece.

Service by Danae was very good; she was calmly professional and completely unflappable by some of the slight whining going on at the Critics table regarding the tardiness of the food.

The Critic recommends you try this restaurant, as it has some imaginative ideas on the menu, the room is comfortable (and cold, especially by the window facing Montejo) and if you are lucky enough to have Danae as your server, you will be very pleased indeed. Just look out for a professional photo session first.