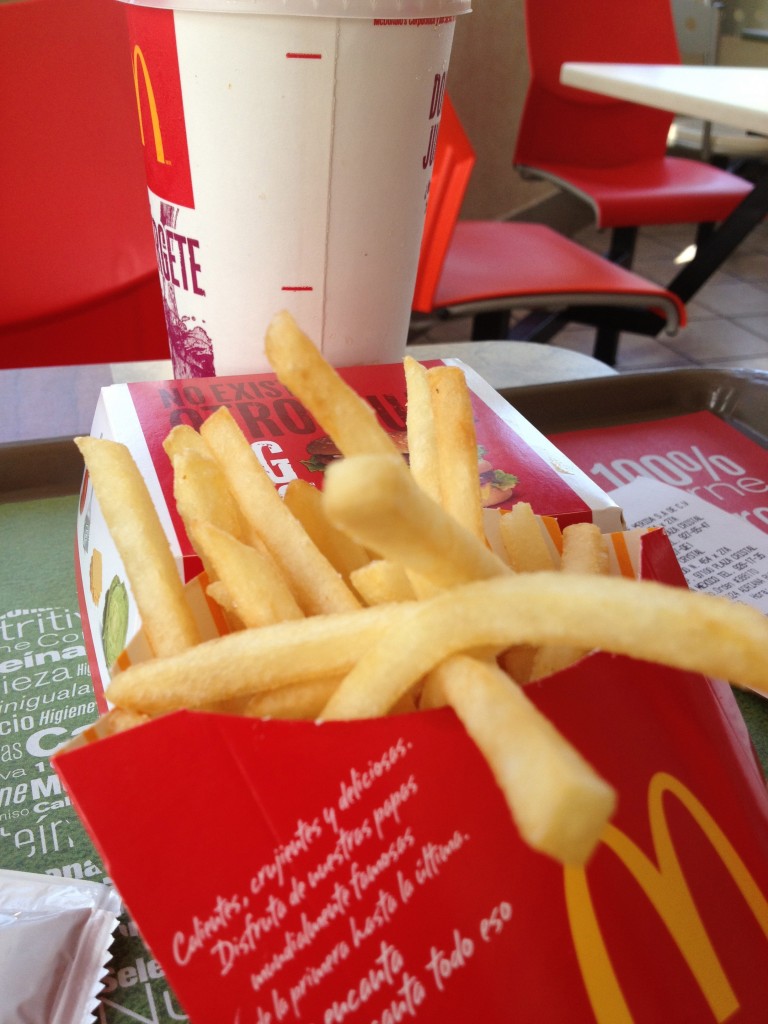 It would, at first glance, seem almost sacrilegious; putting those two terms in the title together (Montejo and McDonalds) but then again maybe not. The Montejos and their ilk rolled over the native population like a steamroller and imposed their supposedly superior catholic customs on their ‘subjects’ and so it is only fitting that several generations later, the McDonalds (and the KFC’s and the Sam’s Clubs) of the world impose their materialistic and money-driven worldview on the mixed bag of white and brown Yucatecans that inhabit the area today.

Driving along Montejo, the part that is still the Paseo and not the Prolongación that borrows shamelessly from it’s Paseo counterpart to give it underserved prestige, the Casual Restaurant Critic, stomach growling in hunger, saw the orange and yellow epileptic fit inducing logo of McDonalds and, judgement clouded by said hunger, stopped to have a bite to eat.

McDonalds on Montejo is located in that awful shopping center by the Monumento a la Patria; the latter a monumental labor of love created over 14 years by a Colombian artist for the city of Merida and the former a monument also, to hideous architecture, neglect, crass commercialism and the pursuit of money at any aesthetic cost. What was once a stately colonial mansion has been converted into a garish McDonalds complete with plastic playroom while the mansions former gardens are now concrete covered, housing businesses that no one wants to visit.

But the Critic digresses. Again.

The immediate reaction that comes to mind upon climbing the steps to the entrance is one of “oops, this place needs a paint job”. The doors are missing paint in the usual places where many hands have been and the effect is not good. Inside, there is no welcoming blast of cold air to greet you. In fact, there is no greeting at all. The place is warm; too warm for a Merida afternoon and the employees are positively glowing (with sweat) and look as though they are suffering from heat exhaustion. As the Critic approaches the counter, occupied only by one other couple who obviously made the same mistake as the Critic, one saggy-eyed young female employee who will not win the coveted Employee of the Month distinction any time soon and unable to utter a sound, motions with one weary arm movement and pointed finger to a cash register down the counter.

The Critic orders his Big Mac and the clerk mumbles something in her heat-induced stupor, which the Critic needs to hear again before understanding. Oh, they will bring it to the table. OK.

The Critic finds the air conditioning working in only one part of the restaurant; the enclosed glass box that is the children’s play area, complete with plastic jungle gym and thankfully free of small screaming human offspring. The chairs are red, orange and yellow and extremely uncomfortable as they are expected to be to get you in and out quickly. Although here it is a moot point as there are no lineups to get into this fine dining establishment. The Critic, waiting patiently for his food, then notices the tinny music blaring through the hi-fidelity sound system; all ponchis ponchis with screaming DJs in between “songs”. This McDonalds really wants you out of there, and fast!

Finally, the food arrives and the fries are fine, the Coke is cold and the burger literally falls to pieces about 1/3 of the way through. Although they bring you the burger, the straws, the napkins and so forth are not included in the “service”.

At last, hands greasy and sticky from the special sauce and now cardboard-like french fries, the Critic abandons this abomination of a restaurant, hopefully never to return.